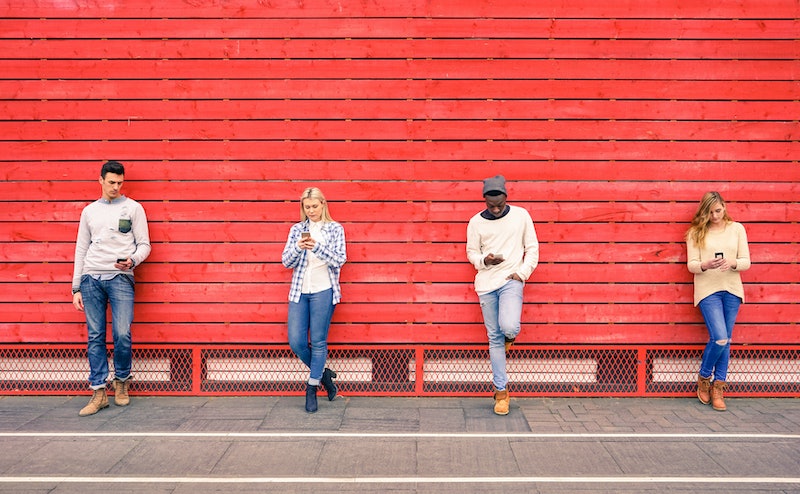 Loveflutter is not new to the dating app market. In fact, the Twitter-based dating app first launched in 2014, hoping to corner the market on folks for whom Twitter provided a better latitude for self-expression than Instagram or Facebook. But Loveflutter made waves again earlier this week when it announced a premium version, Loveflutter BLUE, of the dating app just for verified Twitter users to find each other. Needless to say, verified Twitter's reactions to the news were hilarious.

Loveflutter first announced its official partnership with Twitter three months ago, allowing users to link their dating profiles with their Twitter accounts for the first time. The way it works is, user profiles pop up, à la Tinder, but instead of seeing a photo, users see a blurred out profile pic overlaid with a "140-character fact" the person has written about themselves. Another tap and users can see the photo clearly. Then, they swipe down for a like, or up for a pass.

"Once you go deeper into profile view you'll get to see more information, including up to six pictures, shared interests, common friends and personal details such as height, work, education and political leaning," Daigo Smith, Co-Founder of Loveflutter told Bustle back in April. "You'll also see the most recent 10 tweets of that user (providing that user has signed up with Twitter or connected their Twitter account)."

According to Smith, the idea is that Twitter offers a better glimpse into a user's personality and, thus, into your dating compatibility than an Instagram feed, which apps like OkCupid already link to. But the truth is, Instagram, Twitter, and Facebook simply appeal to different strengths and values. If someone is really into networking and places a high value on personal connections, then Hinge, which uses mutual Facebook friends to find matches, is a great dating app to use.

I personally have no aesthetic skills to speak of, so I'm pretty terrible at Instagram and it's not a great indicator of my personality, save for my snappy captions. But people with great aesthetic skills, be it fashion, beauty, design, or photography, are great at Instagram, for obvious reasons, and, in those cases, IG can be super revealing of their personality. People who are skilled at expressing themselves visually are totally capable of showcasing their authentic values via a platform like Instagram.

Then, there are those of us who live on Twitter, consuming news and culture the second it breaks and who are already onto the next big thing when your friends from high school are finally posting that three-day-old news story on Facebook. Unsurprisingly, when Mashable announced that Loveflutter's premium version, Loveflutter BLUE, would be exclusive to verified users, Verified Twitter had some pretty sassy retorts.

OK, so this particular premium rollout was kind of a snobby flop. But! If you're a writer, comedian, hardcore media person, or just a quick-witted wordsmith, then a dating app which links to a social platform that favors your skill set like Twitter is actually pretty genius. And if you're fortunate enough to have a blue checkmark next to your name, then you probably understand that it doesn't inherently make you any more or less datable than anyone else.