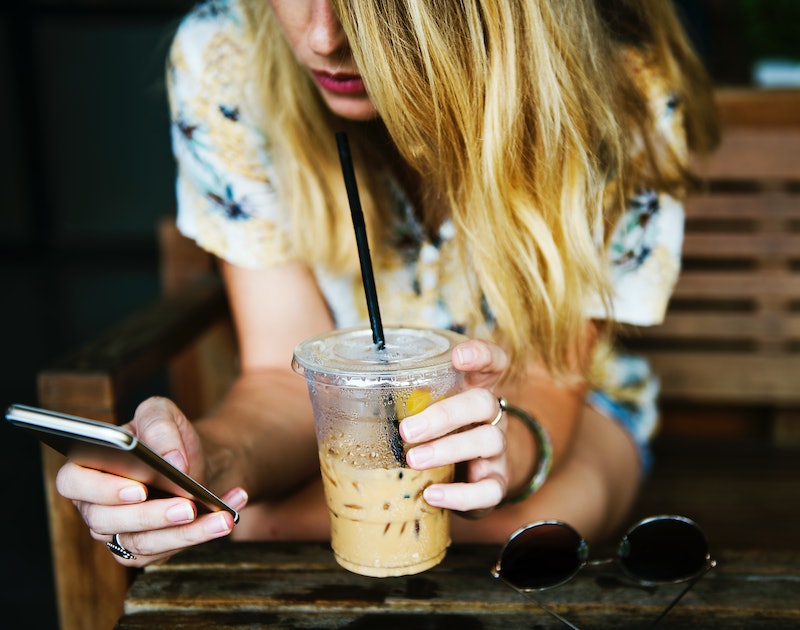 Most people probably think of Twitter as just another social media platform where you can chat with strangers, read the news, and, of course, find memes to send your friends — but not necessarily the best place to find a love connection. But now, thanks to new dating app Loveflutter, our Twitter activity has the potential to help us meet a romantic partner, no risky sliding-into-DMs required.

"Since Twitter is the world’s best platform for self-expression, we think it’s a great way to express yourself in dating," Daigo Smith, Co-Founder of Loveflutter, tells Bustle. "Spontaneous, opinionated, clever and funny, tweets show the real you, not the Instagram-enhanced version. Your Twitter timeline is a ready-made, genuine addition to your dating profile."

If you're an online dater, you probably know how tricky it can be to authentically represent your sense of humor and inject personality into your dating profile. Instead of having to start from scratch, Loveflutter takes your 10 most recent tweets and displays them on your profile, along with all your 'normal' info, like your place of work, education, religious and political views, and mutual friends or interests. Loveflutter also has a unique, Twitter-inspired feature that makes swiping more entertaining and a little less shallow: each user has a 140-character fact that's displayed over a blurry version of their profile picture (simply tap to un-blur) — so the goal is that you're swiping based on looks and personality.

"We want to steer dating in a new direction and shift the focus away from looks."

Loveflutter actually first launched back in 2014 with the mission of making swiping less superficial with their 140-character fact feature — which even inspired a segment on internet-based game show @Midnight. After a couple years off to raise money and improve the app, Loveflutter has returned and partnered with Twitter in hopes of bringing singles a one-of-a-kind, more personalized dating app experience, where our tweets speak for us and help us make genuine connections. "We felt Tinder (and others) were too looks-focused, 'swiping' was getting too fast and superficial," Smith says. "We want to steer dating in a new direction and shift the focus away from looks. 'Looks matter, what you say counts' is our guiding principle behind the features we implement."

According to Smith, Loveflutter works just like any other dating app: it displays people who are nearby, you look through profiles one-by-one, then you decide whether each person's choice of 140-character fact and profile photo intrigues you enough to give them an affirmative swipe (on Loveflutter, you swipe down for 'like' and up for 'pass'). "Once you go deeper into profile view you'll get to see more information, including up to six pictures, shared interests, common friends and personal details such as height, work, education and political leaning," Smith says. "You'll also see the most recent 10 tweets of that user (providing that user has signed up with Twitter or connected their Twitter account)."

The app wants you to get a feel for someone's personality (in short, sweet, 140-character snippets), and break the ice from there once you do match with someone. And if you're the kind of person who's super indecisive and can never pitch an idea for the first date, Loveflutter has your back on that, too: simply use the 'Date Ideas' or 'Find a Place to Meet' features to discover great date venues nearby, then suggest one to your match — so you can plan an outing with minimal stress.

Why Your Twitter Activity Could Help You Find Love

Most other dating apps (OkCupid, Tinder, and Bumble to name a few) allow you to connect your Instagram feed, so other people can take a look at more of your photos and get a sense of the ~real~ you. But Loveflutter argues that might not be the most authentic representation of your personality.

"Humor, shared, values beliefs, and opinions — these are great traits for people to form lasting connections over, traits which are much easier to detect through tweets than through pictures."

Although you probably still curate your tweets to some degree, they might be a bit more candid and in-the-moment than your Insta posts — which makes them the perfect tool to attract people who are like-minded. "Humor, shared, values beliefs, and opinions — these are great traits for people to form lasting connections over, traits which are much easier to detect through tweets than through pictures," Smith says.

Ultimately, the idea behind Loveflutter is simple: our Twitter feeds may be a pretty true-to-life look into our personalities, so by putting our senses of humor and opinions on full display on our dating profiles (instead of only focusing on being picture-perfect), we can potentially find love. So if you're a social media fanatic who takes pride in your Twitter presence, why not let your tweets take the wheel when it comes to your love life?