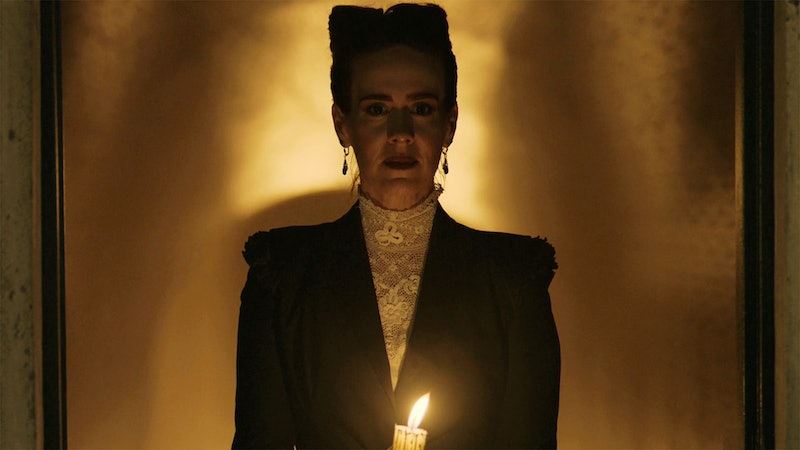 The Season 8 premiere of American Horror Story doesn't mess around with getting to its theme this season — Apocalypse. Spoilers follow. A motley group of people gets the privilege of going to an outpost in AHS: Apocalypse that allows them to survive a nuclear attack. While the world above them suffers nuclear winter, the group at Outpost 3 gets to continue to live. However, this fallout shelter is far from salvation. Sarah Paulson's Ms. Wilhemina Venable harshly oversees Outpost 3 with Kathy Bates' Ms. Miriam Mead by her side. An entity called "the Cooperative" set up this bunker. And while the inhabitants may be safe from radiation, they are about to learn that they aren't safe from Satan himself.

Only a select group of people are granted access to Outpost 3 and they are divided into classes, as Ms. Venable explains. There are those who wear purple (the "elite") and those who wear gray (the "worker ants"). Then there's Ms. Venable, Ms. Mead, and the others who wear black and act as security. Ms. Venable tells newcomers Emily and Timothy, who were chosen to join Outpost 3 because of their superior genetics, that they can consider her "the strong right arm of the Cooperative."

But it's the Cooperative that they need to worry about. Ms. Venable pretty much says that they caused the nuclear holocaust. "The Cooperative has plans far beyond the temporary cleansing fire of the bomb," she tells Emily and Timothy. "The cooperative is not made up of nations or armies. It's a collection of the dozen of the greatest minds mankind has to offer — the visionaries." She also claims that the Cooperative set this up so that "the natural order will restore itself."

As Timothy notes, Outpost 3 doesn't seem so visionary. The entire place is lit by candlelight and not electric lamps, but that's because it recently was changed over to become a bunker. Previously, this fallout shelter was an exclusive boys' school, as Paulson's character explains while giving them the grand tour. While Ms. Venable doesn't make the connection, perhaps this boys' school was a school for warlocks like Miss Robichaux's Academy in New Orleans was for witches. After all, this season will be crossing over with Coven. In any case, just like a private school, there are house rules to follow: Everyone must call Paulson's character Ms. Venable. They must never leave the building. And there is "no unauthorized copulation" of any kind.

Besides Emily and Timothy, the "purple" inhabitants of the bunker paid big bucks to be there. There is hair stylist Mr. Gallant (Evan Peters), his grandmother Evie Gallant (AHS newcomer Joan Collins), talk show host Dinah Stevens (Adina Porter), Coco St. Pierre Vanderbilt (Leslie Grossman), and her assistant Mallory (Billie Lourd). They must formally dine in retro clothing each night for dinner and can only eat food cubes for nutrition. They also must listen to the same song on repeat.

At first, it's the Carpenters' "Calling Occupants Of Interplanetary Craft," but then it becomes "The Morning After" by Maureen McGovern for 18 months. Stu, who gets killed by Ms. Mead because he's allegedly contaminated with radiation (he's not), claims that the music is like "Satan's Spotify playlist." And Stu never gets to find out how right he is.

Cody Fern's Michael Langdon shows up at the very end of the episode — and Murder House fans know that he is the Antichrist. Apparently, Tate and Vivien's baby is behind the Cooperative and comes rolling into Outpost 3 to the classic song, "You Belong To Me" by Patience and Prudence. He commends Ms. Venable's performance since he claims three outposts have already self-destructed and the other three are likely to follow suit. He says there is a place called "the Sanctuary," that's "completely impregnable and stocked with enough supplies to last a decade."

While Ms. Venable is hopeful that he will take everyone from Outpost 3 to the Sanctuary, he says that he will only take the people "most worthy of survival." That means that the Outpost 3 survivors must now prove their worth to the devil. So, as bad as repeated songs and food cubes are for this primarily spoiled bunch, they are about to experience true torture at the hands of the Antichrist. After all, this is the Apocalypse and things can only get more horrifying from here.

More like this
'The Catch' Revisits A Famed Irish Filming Spot From 'The Tudors'
By Darshita Goyal
You Might Want To Rewatch This Key 'On My Block' Scene To Understand 'Freeridge'
By Grace Wehniainen
A 'Terminal List' Sequel & Spinoff Are Reportedly In The Works
By Kadin Burnett and Grace Wehniainen
The 'Freeridge' Cast Shared Their Hopes For A Potential Season 2
By Grace Wehniainen
Get Even More From Bustle — Sign Up For The Newsletter
From hair trends to relationship advice, our daily newsletter has everything you need to sound like a person who’s on TikTok, even if you aren’t.