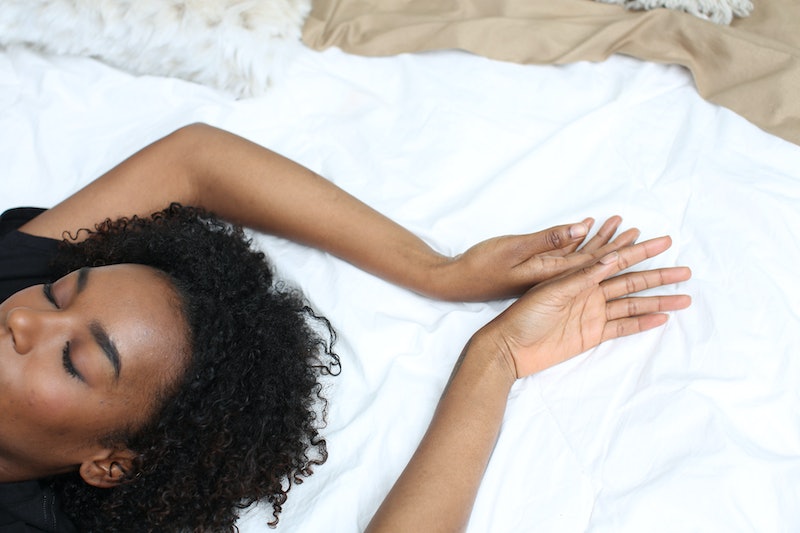 Michelle, 24, was 19 and had never had an orgasm when suddenly, during sex, she saw white and green light in the periphery of her vision. “It was like a cue that yes, this is it,” she tells Bustle. Michelle is one of the many people with orgasm synesthesia, a condition that causes people to see colors when they orgasm. According to a 572-person study described in the book Synesthesia: Perspectives From Cognitive Neuroscience, 1.2 percent of people with synesthesia — a more general condition in about four percent of the population where tastes can take on shapes, sounds can take on smells, and other senses get mixed — see colors when they orgasm. Not everyone with orgasm synesthesia has other forms of synesthesia, though. Michelle says she doesn’t.

For some people, orgasm induces more than just colors — they have full-on visions. Tammy, 31, has “waking dreams,” including one in which “lizard people were making a diplomatic deal with fully sentient polar bears using a gelatinous robot with many mouths.” She even experiences tastes and scents with orgasm. “Sometimes, the orgasmic synesthesia is more like dreaming, in which there may be a narrative with little connection to reality,” Tammy tells Bustle. “Sometimes, it is a strong sense of color or smell, often expressed as a sort of blooming in the mind.”

"I would describe a feeling of clarity. Not like an epiphany or anything, but like all the fuzziness of everyday stress went away."

For Nadia, 38, the whole room becomes tinted. “Everything is suffused with gold or indigo light — sometimes red — for a bit, and then it fades,” she tells Bustle. “If I keep my eyes open, the glow stays at the edges of what I'm looking at. If I close them even partway, it takes over.” Ashley, 23, sometimes sees yellow or blue stars. Samantha, 28, hears bursts of music.

While the cause of this phenomenon hasn’t been studied, there is a plausible explanation. “Shifts in brain state appear to occur to allow the orgasm experience to happen before the orgasm actually occurs,” sex researcher Nicole Prause, Ph.D. tells Bustle. “The entrainment of these brainwaves appears to exist for some time and resembles meditative states. Meditation itself, has, been associated with some of the sensory experiences being described in synesthesia.”

In this state, the brain may lose control over sensory areas, which can prevent us from filtering out visual signals and other stimuli, “permitting the experience of some false sensory perception," Prause says.

People with orgasm synesthesia appear to experience other aspects of sex differently as well. A 19-person study in Frontiers in Psychology found that for people with sexual forms of synesthesia, sex is more spiritual. This group reported more feelings of “oceanic boundlessness” and “visionary restructuralization” than controls.

That’s how it was for Michelle. “I would describe a feeling of clarity,” she says. “Not like an epiphany or anything, but like all the fuzziness of everyday stress went away. There was only one thing happening in my world and it was this experience that I was in, not any brain clutter of work or school.” It was even more profound for Ashley. “I just feel like higher while I'm having an orgasm, closer to God and other worlds,” she says.

“Sometimes, it feels like an opening of the third eye,” says Tammy. “I perceive many layers of the world at once, the concrete and the abstract together.”

There also may be a downside to orgasm synesthesia, though. The participants with it in the Frontiers in Psychology study also reported more sexual desire but lower satisfaction, with “an unsatisfactory feeling of isolation caused by the idiosyncratic perceptions.”

But none of the people I talked to could confirm this isolated feeling — just the spiritual one. So, perhaps, colorful orgasms are as cool as they sound — though probably not as cool as ones accompanied by dreams about lizard people.

More like this
What Are Swingers? Everything You Need To Know
By Lexi Inks
Are Gemini & Leo Compatible In A Relationship?
By Kristine Fellizar
35 Sexy Texts To Send Your Partner
By Griffin Wynne and Carolyn Steber
How Getting An Abortion Has Changed From The ’60s Through Today
By Amanda Chatel
Get Even More From Bustle — Sign Up For The Newsletter