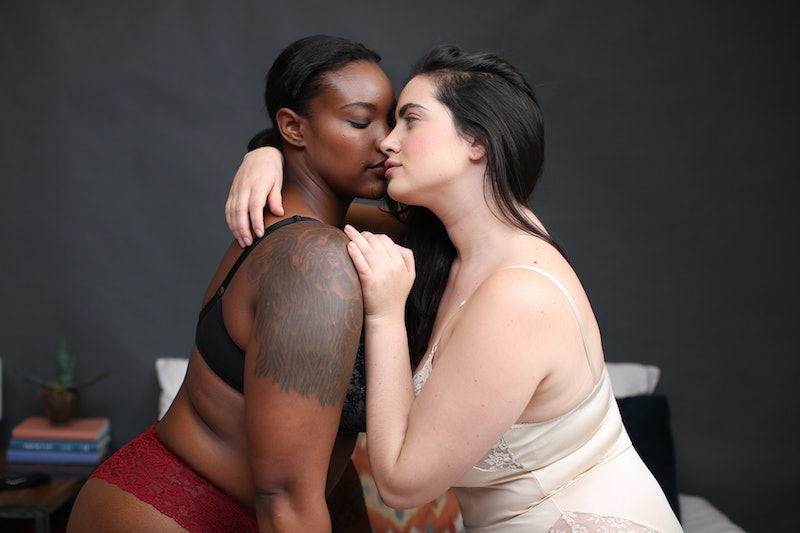 Most of us can agree that sex is pretty fun. But for a fortunate few of us, it’s much more. Some people leave their bodies, feel at one with the universe, and have other spiritual experiences during sex. And with the right methods, more of us could. “I can sometimes literally feel the energy reach out of my body towards my lover,” Elaine*, 45, tells Bustle. “Sometimes, the energy radiates out into my limbs, too.”

Kate, 37, once had “an orgasm that came from God,” she tells Bustle. “I don't actually believe in God, but that was what it felt like at the time: that although I was having sex with a man, the orgasm seemed to come through the air and was pushed into me by another being, or the universe, or was some kind of energy that came from outside the two of us.”

Ally*, 47, and her partner can have “the most insane mutual orgasms with nothing more than touching each others chests, hair and faces — no penetration or stimulation at all,” she tells Bustle. “I don't have an explanation except that there is something between us, not love but intense chemistry where we literally get lost in each other and float into some other dimension.”

"The chemical experiences people have when living a spiritual or sexual experience are almost the same physiologically."

Brent Reider, an author and referee for medical and scientific peer review journals and designer of several FDA-cleared medical devices including the Yarlap, has witnessed women who are “conscious as the wave of orgasm overtakes them, putting the woman into a meditative like state” — and there’s actually research documenting such experiences. “It is a series of long push out contractions with very light simulation,” he tells Bustle. “Like she is so focused on the pleasure she doesn't move as her pelvic muscles contract and relax. Chest is flush and mind is almost serene.”

These people aren’t imagining things: There are scientific reasons why sex can evoke feelings of spirituality. The main reason appears to be that the hormones released during sex and those released during spiritual experiences are similar.

“To look at the scientific relationship between physiological and hormonal changes that are happening in both sexual and spiritual contexts, we see a fairly high degree of overlap,” Sexuality Researcher, Educator, and Therapist Markie L. C. Twist, Ph.D. tells Bustle. “The chemical experiences people have when living a spiritual or sexual experience are almost the same physiologically.” Two of the hormones Twist is referring to are dopamine and oxytocin. People who value spirituality tend to produce more dopamine, and good sex also releases dopamine. They also produce more oxytocin, a bonding hormone that makes people feel closer after sex.

How To Have More Spiritual Sex

Since these are hormones that can be manipulated, we can actually take advantage of them to have more spiritual sex, says Twist. And there are benefits to doing so. For Anatoly, 53, spiritual sex fuels other areas of life. “Non-spiritual sex is like having a very nice drink: you will feel a buzz and a bit of high, but the effects would last a short time,” he tells Bustle. “With spiritual sex, for me, it is feeling like a camel that crosses the Saqqarah desert of Life, facing its struggles and challenges, yet feeling continuous nourishment of the beautiful energy that permeates my body. Just like a camel who draws water from his hump, I draw these beautiful feelings from my body when challenges arrive and emerge unscathed on the other side.”

Sound great to you? Activities that tend to release oxytocin and dopamine include tantric sex, cuddling, breathing in synch, and kissing for four minutes or more non-stop. According to Reider, vaginal muscle tone can help people have the spiritual experiences he’s witnessed, since they involve rhythmic contractions of the vaginal muscles. Exercising your vaginal muscles can help you achieve a “physiological excitatory response capable of inciting a meditative-like state,” he explains. “The exciting aspect of the role of muscle memory is that is suggests this type of experience is a potential for almost every woman.” There’s yet another reason to do your kegels.

Jessica Graham, sex and meditation expert and author of Good Sex: Getting Off without Checking Out, recommends practicing mindfulness to make sex more spiritual. This means consciously placing your attention on specific sensations and then extending it out to your partner’s sensations. “Really see, hear, taste, touch your partner,” she tells Bustle. “Stay present for all of it. Look into your partners eyes. Connect. Soon a kind of sacred merging can begin to occur. Before you know it, you may begin to recognize that there is no separation between the two of you. This feeling of oneness is a deep spiritual insight which will spread out into your life in all kinds of wonderful ways.”

More like this
Are Virgo & Aquarius Compatible In A Relationship?
By Kristine Fellizar
How Do I Deal With Both ED & Premature Ejaculation?
By Sophia Benoit
The Best Time To Date After A Breakup, According To Experts
By Bustle Editors
Are Quality Time & Physical Touch Love Languages Compatible?
By Lexi Inks
Get Even More From Bustle — Sign Up For The Newsletter