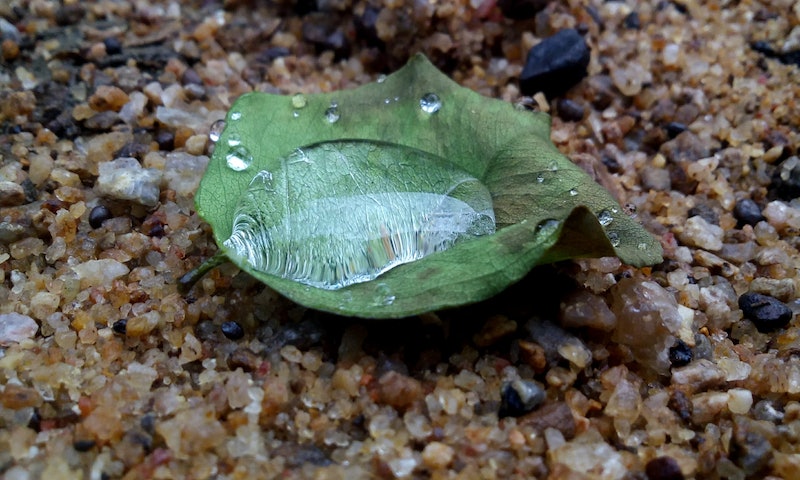 If I ever get my own perfume line, it's gotta be called something like "petrichor." Not only does it sound deliciously pretentious, but the word is also just as pretty as the scent it describes. If your favourite part of the warmer months are those little intervals of rain that leave the hot, dry soil and grass smelling so delectable, then you might want a bottle of my stuff too. But what is petrichor? Don't worry, I'm not looking to plug my own pretend product here. Petrichor is actually the word given to your favourite weather-related smel, and I reckon you should add it to your vocab list right now.

According to The Met Office's definition, petrichor can simply be described as "the smell of rain." It reportedly comes from the Greek words 'petra,' meaning stone, and 'ichor,' which in Greek mythology refers to the golden fluid that flows in the veins of the immortals. So, basically it's like the smell of a golden, godly stone. Sounds about right.

The Met Office also writes that petrichor was first coined in a 1964 article for the science journal Nature. The people behind the article (two researchers at the Australian CSIRO science agency) were inspired to name the smell after finding the cause of it during their research, as the Met Office explains:

"In their research, rocks that had been exposed to warm, dry conditions were steam distilled to reveal a yellow coloured oil that had become trapped in the rocks and soil, a substance they discovered was responsible for the smell."

However, there seem to be some conflicting theories when it comes to petrichor, as Live Science contends that the oil is actually secreted from plants. The site also surmises that "petrichor" is conjured by a second reaction, in which the oil mixes with the bacteria in the ground, and it's the combination of both that is responsible for the gorgeously-scented phenomenon you'll now refer to as 'petrichor.'

So, why are we all so obsessed with this smell? Well, as Professor Buttner told the BBC in July 2018, "[l]ots of animals are sensitive but human beings are extremely sensitive to it."

In fact, humans are so sensitive to petrichor that they can still detect it "[e]ven when you dilute it down to the parts per billion range," perfumer Marina Barcenilla told to the BBC. And, for Hannah Jane Parkinson, the Guardian's 'Joy of Small Things' columnist, it's not just the scent, but the word itself that she feels is so evocative. "Since I discovered it, I’d feel lost without the word 'petrichor,'" she wrote in April 2019.

"The joy of petrichor is separate but connected to the other benefits of a heatwave ending: the regained ability to sleep without all four limbs sticking over the edge of the mattress; being able to read one’s phone screen outside again," she explained. And, as I steel myself for what I imagine will be another very sweaty Great British summer, I'm already excited about the prospect of petrichor. Bring on the showers.