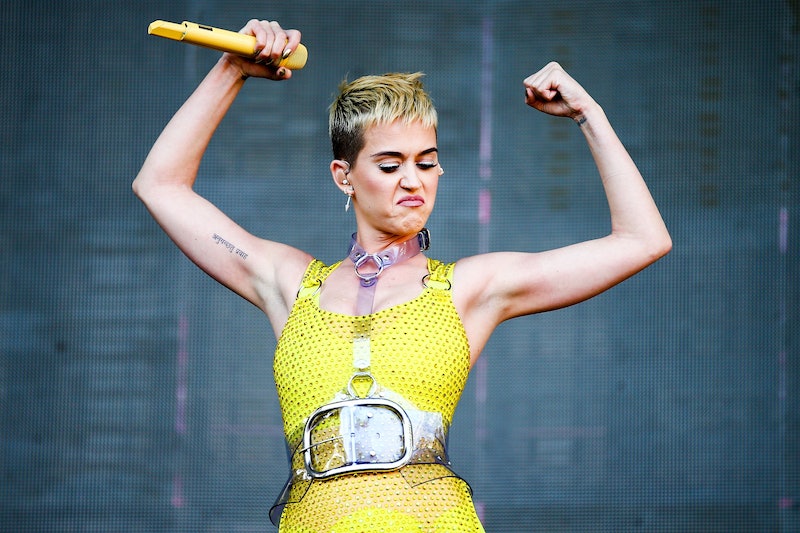 Katy Perry is planning to go more edgy with her new album Witness, set to be released on June 9. In recent interviews, the "Swish Swish" singer explained how she wants to take on a new "purposeful pop" sound with her new music. Now, if you're anything like me, you're probably wondering, what is "purposeful pop"? With tracks like "Bon Appétit," which is going to be featured on the upcoming LP, it looks like Perry is honing in on her usual Top 40 spot and hasn't set out to awaken the masses. This leads me to believe that Perry branding her new sound for Witness as "purposeful pop" could just be clickbait. And by that I mean she's just going along with what she thinks is trendy.

She introduced fans to the new sound with her single "Chained to the Rhythm." I have to say, it's not half bad. I dig the "let's break the mold" message, and the beat is pretty catchy. As she toldVogue, the visuals for the track showcase "the addiction we get from posting and curating our lives on social media to look like they’re perfect, when they’re not." And I think she totally nailed this with the music video.

But if "Chained to the Rhythm" falls under Perry's "purposeful pop" mission, then where exactly do "Swish Swish" and "Bon Appétit" lie? Because, as it stands, I'm not seeing how the two fit under her less poppy, more real sound. It feels like she's trying to lure all of us in with the honesty of "Chained to the Rhythm," only to force us to digest the absurdity of tracks like "Swish Swish" and "Bon Appétit."

The latter are, without a doubt, true to the formula she's presented throughout her career. And, granted, the two could just be the "one-off" tracks that don't really flow with the album's overall premise. But I'd be lying if I didn't say that I totally expect for Witness to be filled with the same poppy fluff as "Swish Swish" and "Bon Appétit." From what I've seen over the years, Perry's music is fun, quirky, and a little bit sexy. She's not the "wokest" person on the planet, nor does she have to pretend to be for her fans to like her. So, why even bother pushing this "purposeful pop" style?

Two words: culture vulture. When said together, these words form a phrase that people of color know all too well. Culture vultures tend to be the poster children for cultural appropriation. You know, when someone is obsessed with the aesthetics of a certain culture and borrows all of its appeal while totally ignoring the plight that the people of said culture had, or still have to, endure? I consider Perry to be a total culture vulture, in so many words. I'm not saying that all white women who sing over 808s are out here "Christopher Columbus-ing." But Perry has been criticized for perceived cultural appropriation over the years, from her recent bizarre SNL performance to the very cringeworthy visuals of "Dark Horse."

When the backlash stemming from her "Dark Horse" music video started to heat up, Perry addressed the cultural appropriation claims in a 2014 Rolling Stone interview, saying:

"As far as the mummy thing, I based it on plastic surgery. Look at someone like Kim Kardashian or Ice-T's wife, Coco. Those girls aren't African-American. But it's actually a representation of our culture wanting to be plastic, and that's why there's bandages and it's mummies. It came from an honest place. If there was any inkling of anything bad, then it wouldn't be there, because I'm very sensitive to people."

In the same interview, speaking of the accusations of appropriation in general, Perry then went on to say,

"I guess I'll just stick to baseball and hot dogs, and that's it. I know that's a quote that's gonna come to f*ck me in the ass, but can't you appreciate a culture? I guess, like, everybody has to stay in their lane? I don't know."

This was the last and only time she responded to accusations of cultural appropriation. Now, if the question is whether or not you can appreciate a culture, the answer there is absolutely. But appreciating a culture and mocking a culture are two totally different things, and "Dark Horse," to many fans, unfortunately played on the many stereotypes of Egyptian culture — showing very little appreciation.

That's why, for me, Perry proclaiming to Vogue that she wants to shed her cutesy persona with this "purposeful pop" seems disingenuous. Especially when this is followed by adding a new edgy hairdo to her look and releasing catchy yet less meaningful singles like "Swish Swish" and "Bon Appétit" If Perry's aim with her new sound is to bring light to the issues plaguing the world, great. But, I won't be able to take her seriously if she doesn't include authenticity in her brand. And, right now, I'm not buying it.