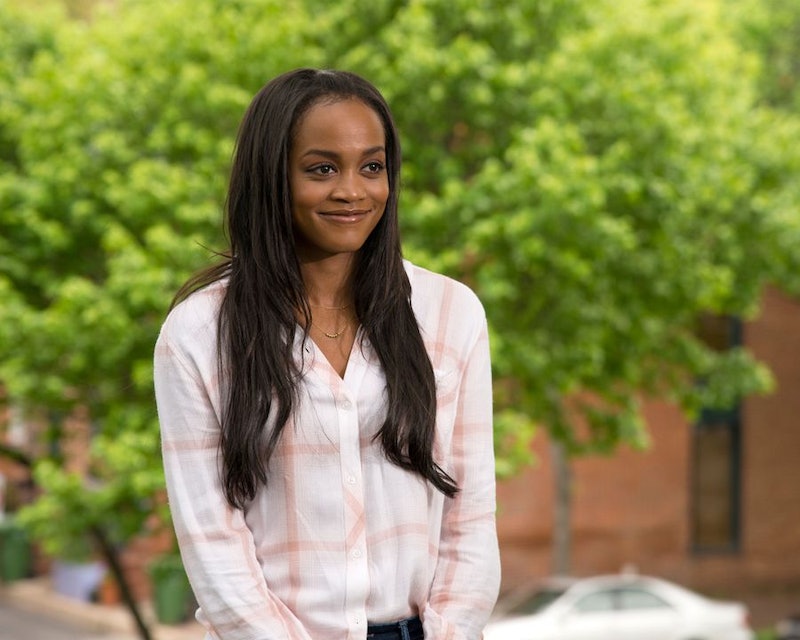 Rachel Lindsay may be the Bachelorette right now, but her professional title is usually "lawyer." And her involvement in America's justice system runs in the family since Rachel's dad is a judge. But Judge Sam A. Lindsay is not just any judge — he is a federal judge for the U.S. District Court of the Northern District of Texas. Rachel has said before that her father is intimidating and while he didn't appear on Nick's season of The Bachelor for her hometown date, and Rachel's dad isn't on The Bachelorette either. It's likely because he's just too big of a name in the legal field to have the time (or maybe even be allowed) to participate in a reality show.

According to Judge Lindsay's profile on the Northern District of Texas district court's website, he received a bachelor's degree from St. Mary's University in San Antonio, Texas, in 1974. He then attended the University of Texas School of Law where he received a juris doctor degree, which is typically needed to practice law in the U.S., in 1977. He has been a federal judge since 1998 and he's also currently on the Board of Trustees for the Center for American and International Law, which is a Texas-based nonprofit focused on "improving the quality of justice through the education of lawyers and law enforcement officials in the United States and throughout the world." Another fun fact? District court judges must be nominated by the president, so President Bill Clinton was the one to appoint Lindsay as a federal judge.

Yet, his career as a federal judge has not been without controversy. In the blog FrontBurner, which is a part of the Dallas publication D Magazine, journalist Kim Zetter wrote about Rachel's father in connection with her piece on Barrett Brown. That's because in January 2015, Judge Lindsay sentenced Brown to 63 months in federal prison for crimes stemming from the investigation into the hacking of the Texas-based geopolitical intelligence platform company Stratfor in 2011. Although Brown is a polarizing figure and now out of prison, the sentencing itself was contentious since Brown was not directly involved in the hacking itself. His story was so notable that a plot point in House of Cards Season 2 was about getting Brown out of prison. So Rachel's father was making headlines before his daughter ever went on reality TV.

As for Rachel's relationship with her father, she was profiled on the Dallas Association of Young Lawyers' website in February 2017 and the author credited Rachel's family for her interest in becoming a lawyer, writing, "Rachel Lindsay comes from a family of trial lawyers, which triggered her passion for the law." And on her Instagram, Rachel has shared photos of her father that prove that while he may be an important figure in the country's justice system, he is still her dad.

The previews of the July 24 episode of The Bachelorette show that Rachel's family will not go easy on Bryan, Eric, and Peter. And so while Bachelor Nation missed out on seeing Judge Lindsay interrogate Nick and missed him this time around too, rest assure her family will pick up the slack on the interrogation side, which is a good thing since the jury's still out on who she'll choose.