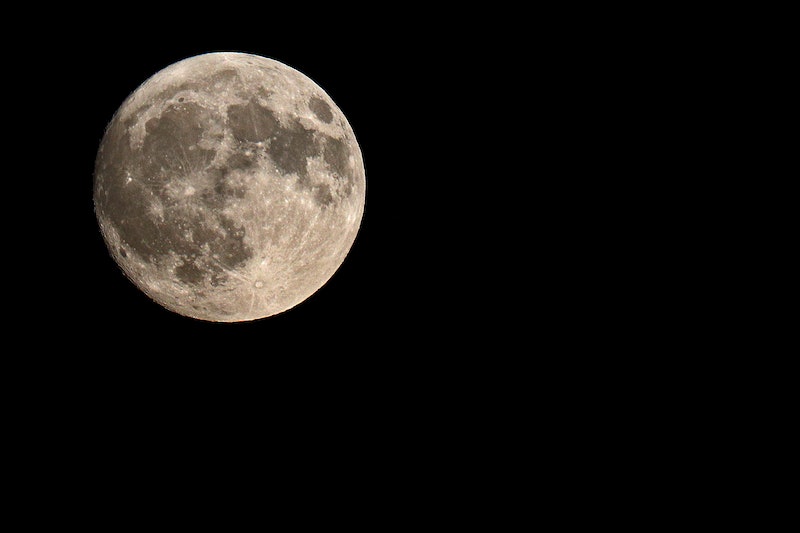 The word "worm" isn't one that usually calls a lot of positive feelings to mind. Worms — unless we're talking about the gummy variety — make me think of big mud puddles and the kinds of diseases that you typically get from drinking unsanitary water, and while I know worms are largely just harmless and productive members of our ecosystem, I prefer not to think about them very much. Imagine my surprise, then, when I learned that we're about to experience something called a worm moon! I can't be the only one who's new to this information, so allow me to tell you what a full worm moon is and why it's actually pretty cool... and it does not look like a worm.

You probably already know that there are official names for many of the full moons that rise throughout the year, and I'm guessing you're probably familiar with the frost moon, the harvest moon, and maybe even the strawberry moon. While the worm moon is less well-known, its nickname is steeped in a similar historic and seasonal significance.

According to the Farmer's Almanac, the worm moon was so named by native Americans, who assigned many of the full moon nicknames we use today in order to more easily track the seasons in a world before reliable meteorology and real time weather forecasts. The March full moon was known then as the worm moon because it rose at roughly the same time that the ground became soft enough for earthworms to appear. This was a significant moment for native Americans — and later, colonial Americans, as well — centuries ago because it meant that roots would also begin to push up through the soil, kicking off seasons of planting that would allow communities to begin growing sustenance again after a long, cold winter. This year's full worm moon will rise on Mar. 1 at 7:51 p.m. EST.

While the Mar. 1 full moon has been dubbed the worm moon in 2018, the March full moon is actually known in some years and regions as the full sap moon, also per the Farmer's Almanac. In areas where maple syrup is a major export, March is usually the time when sap begins to flow into maple trees so that they can be tapped for the most important ingredient of your favorite pancake condiment. Yum!

This year, we're actually getting both a worm moon and a sap moon, thanks to the fact that two full moons will rise in the month of March. While one full moon per month is standard, there are two months of 2018 during which we'll see two, according to Space.com. We saw two full moons in January — one on Jan. 1 and another on Jan. 31 — and will be doubly blessed all over again in March. The second full moon of March will rise on Mar. 31, and since it will be the second full moon that rises in a single month, it's known as a blue moon. Some people are also referring to it as a sap moon, in deference to to the regional nickname that's not always used when the only full moon in March rises earlier in the month.

Are you already confused by the number of ways you can describe the Mar. 31 full moon? Too bad, because there's one more nickname — the pink moon, which, according to Space.com, pays homage to the species of pink flower called the wild phlox that tends to overtake the Northern hemisphere in the early spring.

Even with all of these names, you shouldn't expect these full moons to look like anything other than, well, a full moon. The Mar. 1 moon won't be shaped like a worm and the Mar. 31 moon will be bright white... not blue or pink.