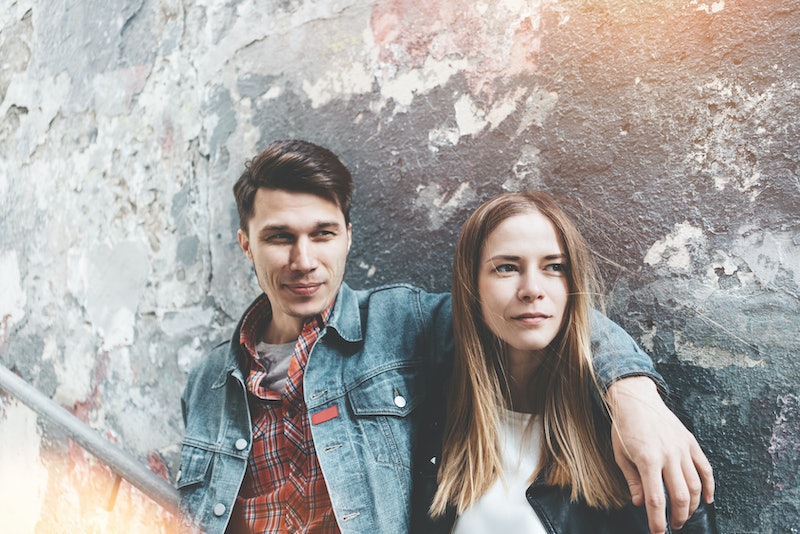 You may have not heard of Turkey Dropping. Or if it does ring a bell, it's been your Aunt Karen literally dropping the turkey after too many chardonnays and a political debate. But Turkey Dropping is actually a dating trend that's about to be in season before you know it. Turkey Dropping refers to a spike in breakups that happen around Thanksgiving. And while at first the idea of being dumped near a major holiday seems a little harsh, it actually makes a lot of sense.

"Fall cues the beginning of the holidays," Dr. Michele Kerulis of Counseling@Northwestern, Northwestern University’s online masters in counseling program, tells Bustle. "The first glimpse of the holiday season appears in October with Halloween and concludes somewhere between New Year’s Eve and Valentine’s Day. This can be a really fun time for new couples or it can be extremely awkward."

Why? It's a stressful, busy time that also puts things in perspective. "The holiday season is packed with pressure to attend parties thrown by friends, family, and employers," Dr. Kerulis says. "This, paired with advertisements encouraging couples to purchase extravagant gifts for each other, can be enough for some couples to call it quits. When one person is not as into the relationship as the other, Thanksgiving seems like the ideal time to call it quits."

Sure, it's not the dream, but there's a very good reason why people tend to go for it. Here's why Thanksgiving breakups are so popular:

A lot of Turkey Drops happen in your Freshman year at college — and it's not hard to see why. If any of you, like me, had an ill-fated high school into college relationship, you've been there. I was sure that my relationship would last through my boyfriend going to college and me going to a different college a few years later. And for some people, going to separate schools works. But for many of us, myself included, it becomes clear that very quickly that long distance just isn't going to work. So Thanksgiving is the first break in college when you visit home and finally put those relationships out of their misery.

It's A Chance To Do It Before The Big Holidays

The truth is, it doesn't feel nice to break up with someone over the holidays. But if you don't get it done in November, then there's not going to be another good time until when, March? You can't drag a relationship out another four months. So in some ways., Thanksgiving is actually the perfect time. At least, when you consider the alternative.

So How Can You Prevent It?

If your relationship is going badly anyway, you may not be able to save it. But a good way to tackle holiday expectations and is to keep the communication open. "The key to successful relationships is communication," Kerulis says. "Communicating expectations of each other early on can help you navigate the holidays. Acknowledging the fact that the holidays come with expectations from friends and family is the first step. Have an open conversation with your significant other to discuss how you see your holiday season together. This might include what parties or events you will attend together or alone. Some people might not be ready to introduce their significant other to their family for a variety of reasons so talk about this with your beau."

It feels like a really difficult conversation to bring up, but it actually can make a huge difference. "You can say something like, 'I really like you and I don’t want to pressure you into attending my family parties,'" Kerulis says. "It is important to discuss the reasons why you might not be invited to attend parties with your signifiant other, like family drama or long travel. If you are not invited because the relationship is not public, that is a problem. In that case, [they're] just not that into you and breaking up is probably a good idea."

There's never going to be a right time to break up with someone. And sure, Thanksgiving isn't ideal. You don't to ruin someone's pumpkin pie, after all. But whether you're realizing that you just can't make it long-distance or you just need to get it over with before all of the other holidays hit, it may be the once chance that you have. So Turkey Dropping is here to stay, because it's the best option for some flailing relationships.