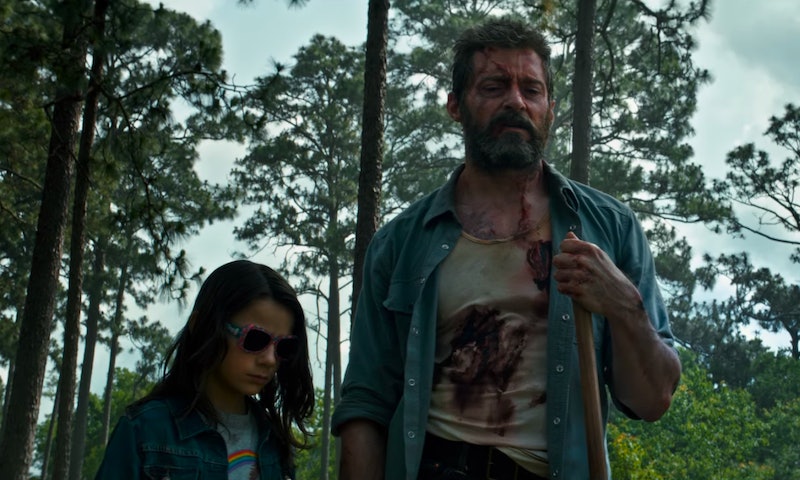 Logan introduces a brand new big bad in to the X-Men universe, and I think it's safe to say it's one of the most consequential villains yet. In Logan, Wolverine finds himself taking care of Laura, a young mutant with powers eerily similar to Wolverine's who is on the run from some shadowy company known as Alkali Transigen (or just Transigen). Transigen is so shady, the exact nature of their business remains a mystery throughout the film. What we do know, however, is that they are no friend to Wolverine. Just what is Transigen in Logan, and how sneaky is this company, anyway?

Transigen is an off-shoot of Essex Coprs, the corporation behind the Weapon X program that made Wolverine into the mutant we know and love. In Logan, we are introduced to Transigen through Pierce, a creepy bounty hunter like character with a mechanical hand and threatening drawl. We don't know him, but once Wolverine sees his Transigen business card, he's not happy. Clearly, this company is important, and Wolverine recognizes it.

But, if Transigen doesn't ring a bell, don't worry, you won't get your X-Men fan card revoked. Transigen actually hasn't been featured or mentioned in any other X-Men films and good luck trying to find it in the comics. Instead, it's a brand new big bad company created specifically for Logan. Over the course of the film, it's revealed that Transigen is a direct result from Essex Corps' role in the X-Men: Apocalypse post-credits scene, when a shadowy figure recovered a vial of Wolverine's blood and put it in a briefcase labeled "Essex Corps." In Logan, it is clear that Transigen used that vial of blood to create X-23, aka Laura.

In many ways, Transigen is the successor of the Weapon X program that created Wolverine. Obviously, Transigen has the same mission as Weapon X and Essex Corps, to subjugate mutants by experimenting on them and enslaving them, but takes it a step further. In Logan, Transigen creates clone mutants to make a killer army instead of just experimenting on pre-existing mutants. And Transigen and Weapon X have more in common than just their nefarious agenda. Both are run by a Dr. Rice. Transigen's Dr. Rice, played by Richard E. Grant in Logan, is the son of the Dr. Rice who experimented on Wolverine back in the day. Furthermore, the full name of the company, Alkali Transigen, includes a reference to the Alkali Lake facility where Wolverine was experimented on.

Aside from cloning mutants and attempting to raise a killer army, Transigen has another awful accomplishment under its belt — spoiler alert. In 2029, when Logan takes place, mutants are a dying breed. It's revealed at one point that no new mutants have been born in 25 years. And later in the film, it's revealed why: Transigen. With all the mutant DNA Transigen collected for their cloning experiments, they also discovered they could isolate the gene mutation that caused mutants to manifest themselves. Once they figured out how to stop that specific gene mutation, they put chemicals in popular sports drinks and sodas to stop the spread of the mutant gene.