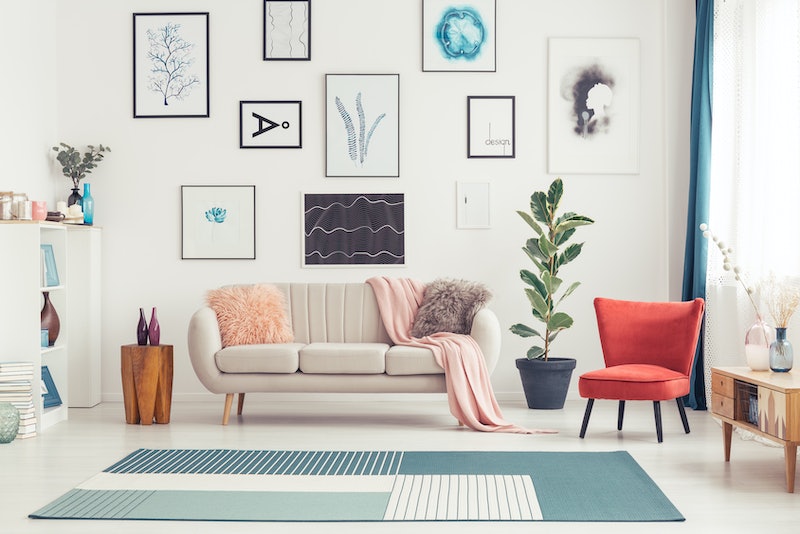 There’s a phrase I’ve seen pop up from time to time with regards to home organization and design: Wabi-sabi. The term isn’t new; indeed, the Japanese aesthetic has a long, long history behind it. Lately, though, I’ve seen it mentioned in conjunction with the KonMari Method — which brings a whole new explanation to the question, “What is wabi-sabi?” Indeed, while parallels can be drawn between wabi-sabi and Marie Kondo’s method of decluttering, wabi-sabi may also be seen as… well, not exactly an opposite of the KonMari Method, but as an alternative to it. If the minimalism of KonMari is starting to get you down, wabi-sabi is worth considering.

First things first: Wabi-wabi is not just an of-the-moment “design trend”; it’s a much broader philosophy and world view which can be applied to a wide variety of areas. Art is a biggie, of course — and it’s from here that we get the interior design connection. What else is the look and makeup of your home but the art of your particular life?

In the pantheon of Japanese aesthetics, wabi and sabi were originally two distinct philosophies. According to the Stanford Encyclopedia of Philosophy, wabi is most easily understood as the idea of understated beauty; it may be applied to any variety of art, but was “most fully developed” within the context of the Zen art of tea. In a work dating to 1690, tea master Sen no Rikyū is quoted as saying, “In the small [tea] room, it is desirable for every utensil to be less than adequate. There are those who dislike a piece when it is even slightly damaged; such an attitude shows a complete lack of comprehension.” The idea isn’t complete “asceticism,” but rather “moderation,” with imperfection being embraced instead of rejected. The beauty of wabi is fresh and simple, but not necessarily perfect.

Meanwhile, sabi refers to the beauty something acquires due to its age — again, with imperfections being a source of beauty, rather than something that takes away from it. According to the Stanford Encyclopedia of Philosophy, early 20th century novelist Tanizaki Jun'ichirō wrote of sabi:

“We do not dislike everything that shines, but we do prefer a pensive lustre to a shallow brilliance, a murky light that, whether in a stone or an artifact, bespeaks a sheen of antiquity. ... We love things that bear the marks of grime, soot, and weather, and we love the colors and the sheen that call to mind the past that made them.”

Although, as Tofugu notes, not everyone agrees with the bringing together of the two terms to create a new one — writes Jack Richardson, “[Some] feel the combination creates a snappy phrase, diluting the separate meaning of each” — wabi-sabi combines the ideals of each of its two pieces: As The School of Life’s “History of Ideas” segment on it describes it, “Wabi-sabi believes that things are always more beautiful for bearing the marks of age and individuality.”

Wabi-sabi can be applied to just about everything, whether tangible or intangible. “In objects,” writes Mike Sturm at Better Humans, “you can see it in the presence of imperfections and evidence of use and wear. The objects have clearly been used, cared for, and kept. They could never be mistaken for new, but that’s precisely the point”; meanwhile, in people, continues Sturm, “you can see it in simple jeans and an old T-shirt, scuffed old shoes, salt-and-pepper hair groomed neatly, but not obsessively, and an understated, but undeniably genuine smile. There is an understated grace and wealth of experience, a comfort, and lack of aggressive desire and ambition.”

So: What does wabi-sabi have to do with interior design? A lot, as it turns out; you can use it as both an organizing principal and a touchstone for your home design — and personally, I find the idea incredibly appealing, particularly as someone for whom the KonMari Method doesn’t really work.

This particular application of wabi-sabi isn’t exactly new; in its current form, it’s been part of the scene since at least 2008. In a piece for Apartment Therapy titled “Decorating The Wabi-Sabi Way” published nearly 10 years ago, Grace Shu gave us a delightful primer for what was then a growing theme in design philosophy; what stuck out to me the most was her description of what sets wabi-sabi apart from other seemingly similar ideas: “Unlike shabby chic, wabi-sabi decor inspires minimalism that focuses more on the people who live in the space than anything else,” she wrote. “Possessions and other items are pared down to the essentials based on utility, beauty, or nostalgia (or all three). The color palette sways toward whites and earth tones thanks to the use of natural materials. It's almost Shaker-style in its approach: Live modestly, and learn to be satisfied with life as it can be once the unnecessary is stripped away.” It's not just about the things; it's about the people.

Marie Kondo’s The Life-Changing Magic Of Tidying Up: The Japanese Art Of Decluttering And Organizing wasn’t published until several years later, in 2011 — but there’s a lot that the KonMari Method has in common with wabi-sabi (which isn’t entirely surprising, given Kondo’s background): Both philosophies stress keeping what you love, and finding beauty in the things that you keep. Even so, though, there’s a lot that wabi-sabi and the KonMari Method don’t have in common — and, in that sense, wabi-sabi might be the antidote to KonMari burnout.

There’s an element of perfectionism deeply embedded within the KonMari Method; indeed, it’s always felt somewhat ruthless in its execution to me: Something either “sparks joy” in you, or it doesn’t — and if it doesn’t, away it goes. There are no gray areas; nor is there room for nuance. In fact, this ruthlessness is what has actually turned me off of the KonMari method: I tend to be a terrible perfectionist in so many other areas of my life that forcing myself to make sure my collection of belongings is “perfect,” too, seems like an unnecessary source of additional stress.

What I like about wabi-sabi is that the idea of embracing imperfection doesn’t just apply to your belongings; it applies to you, yourself as well. If you’re not up for the task of perfectly KonMari-ing your life? That’s OK, according to the principles of wabi-sabi. Just as your physical stuff may not be perfect, you and how you manage your physical stuff may not be perfect either — and that’s fine.

In many ways with Barry Yourgrau’s assessment in the New Yorker of this aspect of the KonMari Method: “Kudos, then, to Kondo,” he wrote in 2015. “Even if her attitude, for instance, toward keeping books — that still-unread means never will be read, and that, once read, books shouldn’t be retained for rereading — strikes me as almost barbaric.” As someone for whom books have always mattered a great deal, this particular observation strikes a major chord with me: Although these days, I read most of my books on an e-reader — not necessarily because I prefer electronic mediums over paper, but because it’s a lot easier to, say, bring enough books to last me through a trip or a vacation if they’re all held on one device than it is to bring an additional bag full of things to read — my physical library is still one of my most prized possessions. The books that comprise it have memories upon memories attached to them, both with regards to the objects they are and the stories they contain. I read my books, and I re-read them, and I re-read them again; in fact, it’s exceedingly rare that a book in my library will be read once and only once.

Whereas the KonMari Method would have me jettison a book after I’ve read it once, wabi-sabi encourages keeping it — and, indeed, states that the more it is read, the more beauty it holds. Every creased corner, every broken spine, every fingerprint on every page — they are marks of imperfection; but, in their imperfection, they are beautiful. Does every book I own “spark” the same level of “joy” in me? Of course not; I don’t blindly adore everything I read, and like all readers, I have books I like, and I have books I love. But my bedroom would not be my bedroom without the hulking great shelf in the corner packed to the proverbial gills with books. My home would not be my home without it.

That’s just one example, of course — but you can see how the idea of wabi-sabi might work better for people who, like me, don’t find the KonMari Method particularly helpful when it comes to organizing and decorating your home. So, if you’ve found yourself starting to move away from absolute minimalism, try giving wabi-sabi a shot — it might be just what you need.