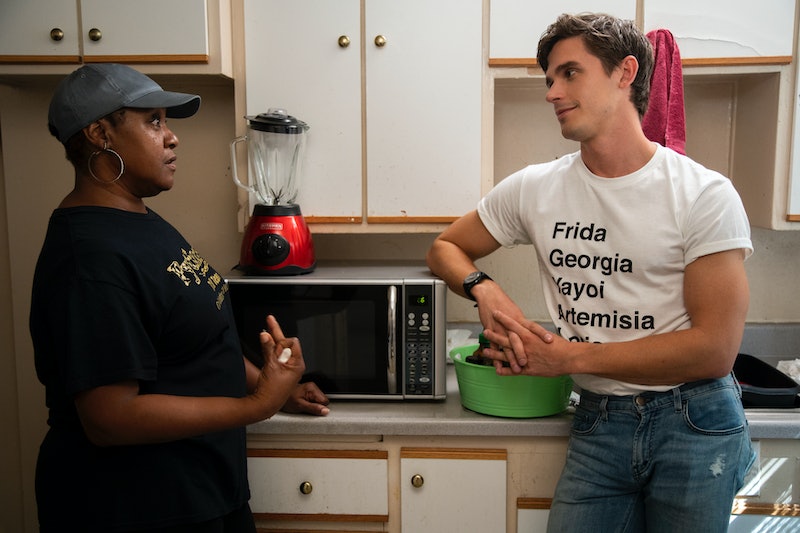 The Fab Five were shocked when Season 4 Queer Eye hero Wanda Winters announced she was stepping back from her beloved job. Her reveal came after the Fab Five had concluded their time with her and were just watching her progress update on video. No one knew it was coming, because, throughout the episode, Wanda was all Pythons Drill Team, all the time. However, even if she may have stepped back, after Queer Eye, Wanda is still very much part of the Pythons world.

In the episode progress update, Wanda was shown giving a speech at the premiere of Blow The Whistle, a documentary about the Pythons Drill Team, which she started in the '80s. During her speech, she announced she was relinquishing the day-to-day to Pythons creative director Gregory and music director Joe. (Gregory and Joe also happen to be the people who nominated Wanda for Queer Eye in the first place.)

"As of today, I will be taking a step back to deal with my administration," Wanda said. "Gregory and Joe, I hope that, you know, you continue the legacy that the Pythons Drill Team has been doing for the last 30 years. And if you mess up my drill team, I know where you live." She later added that she wasn't going to step back completely. "I'm just gonna step away from the day-to-day, 'cause I can't leave my baby. But I am gonna spend more time for me, and I can't wait to show the world what Miss Wanda is all about without her Python T-shirt."

Wanda seems to have held up that end of the bargain. In a Facebook photo posted on July 12, Wanda is standing with the Pythons but she's wearing a sleek red blouse instead of a T-shirt with her team name on it. She's still Team Pythons, but she's not broadcasting it with her clothing choice. She is, however, still broadcasting it in many other ways. On Facebook, she's listed "Pythons" as her middle name. Wanda Pythons Winters.

She's also still listed as the team director on her LinkedIn and as the CEO on the Pythons website. On her personal Facebook page, she also still posts a lot of Pythons content.

So it seems that she's still heavily involved with the team, which makes sense. She founded the team and it's been her life for 30 years. She may have walked away from the day-to-day, but she's not leaving it behind all together. According to the Pythons website, they're currently prepping for a trip to New York where they will perform on Broadway and in Times Square from July 26-29. According to the Pythons Facebook page, they've been waiting for this trip for a long time. "Life time opportunity for our members," a Facebook post says. "The team have been fundraising for almost a year and excited to share the news!! More to come, stay tune!!" With this trip being such a big deal, expect Wanda to be there right alongside them.

In between talking, living, breathing the Pythons still, Wanda has also made time to reflect on her time on the show. She posted a photo to Facebook of a newspaper article about the upcoming season alongside this caption: "What an honor to be one of Kansas City's [heroes] of Netflix Queer Eye, Season 4!!! Even though they have the wrong age listed, I'm just glad to be featured! Check ya girl out starting tomorrow."

The age comment harkens back to the episode where Wanda simply refused to tell the production team how old she was. So her sense of humor is as on point as always. Queer Eye's goal is not to completely change a person, so it's cool to see that Wanda is still doing her Pythons thing. She's just also doing it in a change of outfit and attitude.