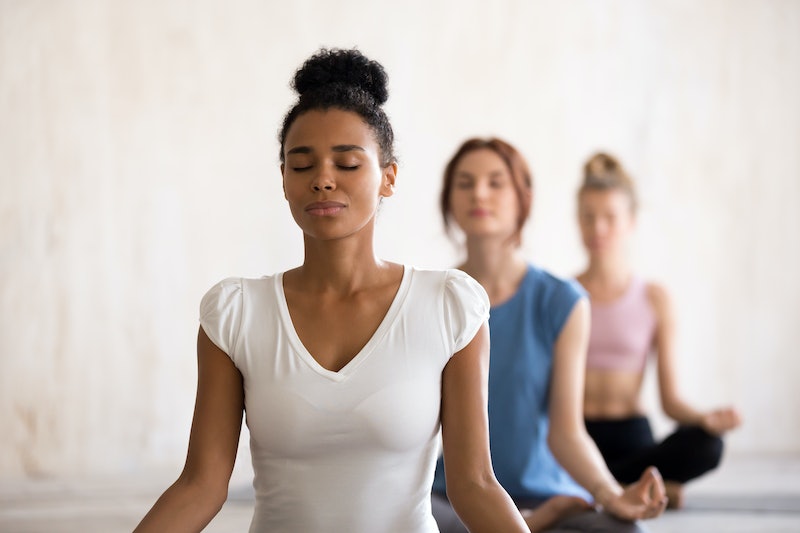 If you've had one of those times where nothing has gone right and you feel like clearing your head, then you might want to turn to meditation when you're annoyed. Meditation can help when you're anxious or stressed, or feeling plenty of other emotions that you'd rather get over. But what do those 10-20 minutes of deep concentration and relaxation actually do to your overactive annoyed brain? The answer, experts tell Bustle, is multi-faceted — and the immediate affects of meditation on the brain are more complicated than they might seem.

One of the major ways in which your brain activity might be affected by meditation after an annoying day involves the default mode network. Dr. Jud Brewer, MD, PhD, Director of Research and Innovation at the Mindfulness Center and associate professor in psychiatry at the School of Medicine at Brown University, tells Bustle, "The default mode network is the network of brain regions which gets activated when we get caught up in craving, or worry, or or rumination, or we're depressed — any time we get caught up in thinking." When you find yourself unable to stop thinking about the things that have made your day terrible, your default mode network is responsible.

Dr. Brewer tells Bustle that when you meditate, "that same network gets de-activated." How much the network is affected by meditation, though, appears to depend on how much meditation you've done in your life. One of the most fascinating aspects of meditation is how it changes the brain over time — and, as with many other habits, practice makes perfect.

"We begin to see stabilization of changes in the brain after 1,000 to 1,500 hours of meditation practice," Dr. Richard Davidson, PhD, William James and Vilas Professor of Psychology and Psychiatry at the University of Wisconsin–Madison, and the founder of the Center for Healthy Minds, tells Bustle. "You can think of it as learning a musical instrument; if you got 24 hours of training in playing the violin, you still wouldn't be very good at playing it." However, even if you're very new to meditation, Dr. Brewer's research shows that you may be able to turn off the default mode network pretty easily.

"We were doing a large study with neural feedback in an fMRI scanner, and 5% of novices showed spontaneous differences in that area," Dr. Brewer tells Bustle. "Some novice meditators can drop into that space pretty quickly, which is interesting." Even if they'd never meditated before, a small portion of new meditators were able to turn off their default mode networks pretty immediately after they'd started practice — and if you've been practicing for a while, that's very likely to happen to your brain if you're meditating after a stressful day.

It feels, Dr. Brewer says, like going from a "closed or contracted state," where the default mode network is dominating your thoughts, to an "open and expanded state" where you're no longer caught in the loop of stressful thoughts. "As people train in meditation they learn to be in that space more often," Dr. Brewer tells Bustle.

The impact of this default mode network shift can be significant. Dr. Carly E. McCord, PhD, assistant professor in the Department of Psychiatry at Texas A&M, tells Bustle that this is why mindfulness meditation can help patients with chronic pain. "Mindfulness teaches patients to turn towards their pain rather than make attempts to escape it," McCord says. "By raising one’s attention to pain, he or she can acknowledge it and increase acceptance of the pain. In doing so, thoughts and feelings of pain freely come and go, rather than significantly consuming a person’s attention." A study of MRI scans in 2018 found that people who practiced mindfulness regularly were more able to shut off their default mode network and become less attuned to pain, helping them experience it with less intensity.

Another way in which meditation can affect your brain after an annoying day concerns various brain regions themselves — but, again, the effects are dependent on how often you meditate. "Human distress quite generally has been associated with increased activation in the almond-shaped amygdala, a deep brain structure linked to the detection of novel and dangerous stimuli, and in the right prefrontal cortex, a part of the brain behind the forehead that controls alertness and attention," Dr. David A. Merrill, MD, PhD, a neurologist at Providence Saint John's Health Center, tells Bustle. If you've been meditating for as little as two months, according to a study from Harvard in 2012, your amygdala activity can decrease — not only during meditation, but all the time. 2018 research published in Social Neuroscience backed this up: people who've been meditating regularly, it found, show lower activation levels in the amygdala, helping them feel less distress overall, whether they're meditating or not.

Meditation after a hard day can also affect your brain in different ways according to what kind of meditation you choose. “Meditation has been noted to make electrical rhythms in the brain faster and excite different parts of the brain depending on what you are focusing on during meditation," Dr. Clifford Segil, MD, a neurologist at Providence Saint John's Health Center, tells Bustle. "Meditations with guided imagery activate the visual cortex, for example."

If you want to see the best results when meditating after a hard day, it's a good idea to do it regularly. You'll increase your ability to turn off your default mode network, calm down your amygdala and amp up theta and alpha brainwaves — and in the process, let the stress of the day melt away.