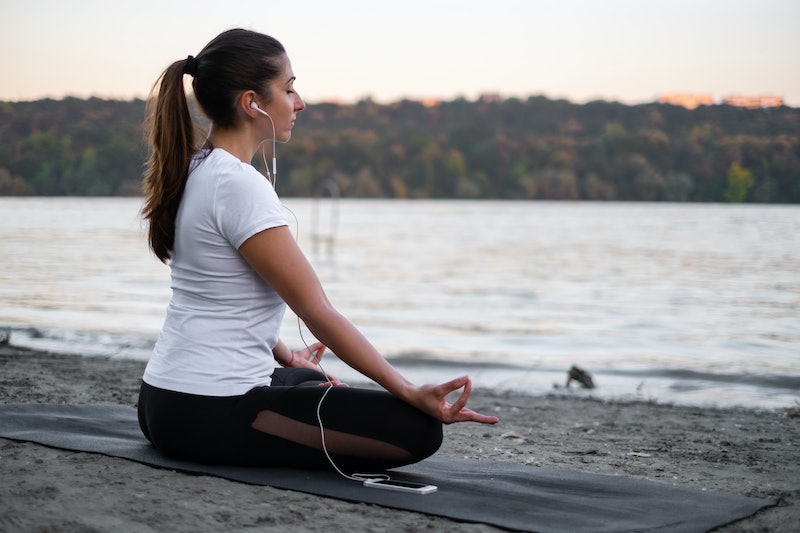 If you have anxiety, chances are you've considered meditating, or have even given it a try. It is, after all, one of the most well-known ways to manage symptoms, and is something many therapists suggest as a way to feel less stressed. But did you know meditation helps with anxiety not only because it changes your focus, but also because it may change your brain?

It really is amazing what meditation can do. But before we get into neural pathways and other brain-related stuff, let's chat about anxiety itself. "Anxiety, defined in its simplest terms, is worry about things that have not happened, the 'what ifs,' and rumination over what may happen," Dr. Catherine Jackson, a licensed psychologist and board-certified neurotherapist, tells Bustle. As you focus on these what-if scenarios, you're going to feel stressed, you may struggle to calm down — and anxiety can spiral from there.

"Meditation, on the other hand, is a mindful activity that brings you to the present moment and does so in a non-judgmental way," Jackson says. Instead of worrying about what might happen, meditation helps to refocus your thoughts, and allows them to pass by without labeling them as "good" or "bad".

Meditation isn't about pushing anxiety away, but allowing for an openness to the experience so you can be less fearful, Lauren Cook, MMFT, a clinician practicing emotionally-focused therapy, tells Bustle. With meditation, you can learn to "live with it, and through it," she says.

As for how meditation can change your brain, "some of the benefits include improved focus and concentration and decreased brain activity in particular parts of the brain that’s involved in stress," Jackson says. "Meditation [...] quickly activates the parasympathetic nervous system, which helps the brain and body calm down from anxiety and tells you to relax."

If you meditate regularly, you can change those aforementioned neural pathways, which you can think of as engrained patterns in your brain. "When we engage in the same negative thought process over and over again, it carves a path in our brain that makes it easier to repeat in the future," Acacia Parks, PhD, a psychologist and chief scientist from Happify Health, tells Bustle. "Mindfulness is an example of an alternative to anxiety, and with enough practice, you can carve new paths that make mindfulness your go-to response to stress."

Of course, if you only meditate once or twice, you aren't going to lay down new neural pathways, or change the structure of your brain. But if you turn it into a habit, research has shown it can be done.

One study from Harvard University, which followed participants for eight weeks as they practiced mindfulness and guided meditations, found they had increased gray-matter density in the hippocampus, according to Psychology Today. This area is associated with self-awareness, compassion, and introspection, and was not found to be any different in the study's control group.

The participants, who spent about 27 minutes a day on average in mindfulness practices, also reported less stress, which correlated with decreased gray-matter density in the amygdala, or the area of the brain associated with anxiety. Speaking of the study, Jackson says the aspects of meditation that improved the brain appeared to be setting time aside with no distractions, so that the mind could be fully aware and present in the moment.

The thing is, even with all these benefits, it can still be difficult to find time to meditate, or to do it on a regular basis. So if you are new to meditation, "start small," Cook says. "Just sitting for three minutes and focusing on the breath is a great beginning." And you may be able to build from there.

You can also experiment with different meditation apps, which will guide you through a practice, and teach you what it means to meditate. Or you might try activities that incorporate meditation into them, like a yoga class which will likely make time for mindfulness, Cook says.

Research shows that meditation can have a powerful impact on the brain, and it can be quite the helpful tool if you have anxiety, so even if you just do it for a few minutes a day, you may notice a pretty big change.

More like this
The 8 Best Crystals For Meditation, According To A Healing Energy Practitioner & Meditation Teacher
By Lauren Moison
5 Signs You Have A Toxic Relationship With Yourself
By Lexi Inks
Here's How Often You Should Stretch To Improve Flexibility
By Carolyn Steber
Kourtney Kardashian’s Wellness Guru Shares Her #1 Tip For Better Health
By Taylor Jean Stephan
Get Even More From Bustle — Sign Up For The Newsletter
From hair trends to relationship advice, our daily newsletter has everything you need to sound like a person who’s on TikTok, even if you aren’t.