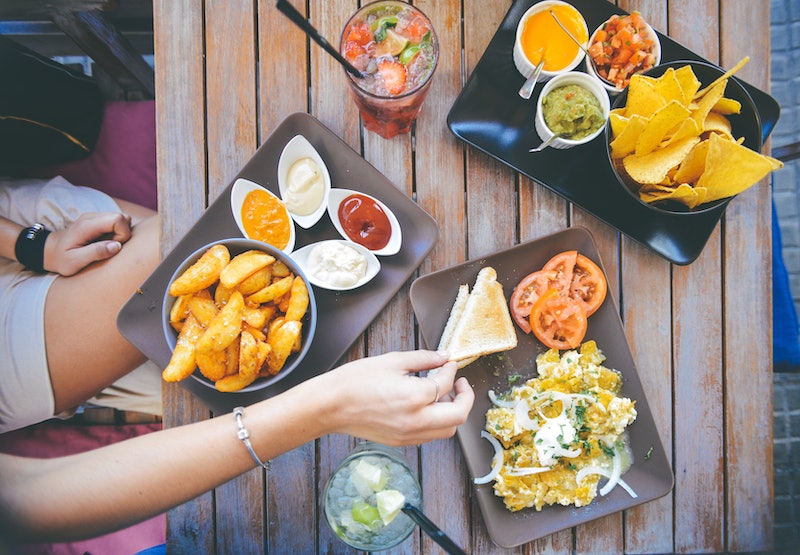 When tragedies happen, it’s hard not to feel helpless, to want to find ways to help Puerto Rico while wondering whether there is anything impactful you can individually do. Thanks to a group of chefs and restaurants throughout the United States, there is something very simple you can do in the next week, something you likely were already planning on doing anyway: eating at a restaurant. In honor of World Food Day on October 13, 150 restaurants across the country are helping Puerto Rico by donating 10 percent of their profits to relief efforts.

Mario Batali, Emeril Lagasse, Stephanie Izard are among the chefs whose restaurants are participating in next Friday’s event. From New York to Chicago to the Bay Area, some of the most recognizable names in the food industry will be giving a portion of their profits to help the people of Puerto Rico. You can find the full list of restaurants participating in World Food Day on the organization’s website.

World Food Day is part of an effort from World Central Kitchen (WCK), a nonprofit started by chef José Andrés working to “empower communities and strengthen economies” through the power of food. WCK is currently working to combat hunger and poverty in countries across the world, including Haiti, Zambia, Nicaragua, the Dominican Republic, and the Unites States. The organization’s work focuses on improving four key areas of life: health, education, jobs, and social enterprise. In addition to the donations gathered on World Food Day, WCK has chefs on the ground in Puerto Rico helping feed people as well.

Chef José Andrés is one of those chefs helping rebuild Puerto Rico through food. In late September, Andrés flew to Puerto Rico with food and staff members to help with hurricane relief efforts. There, Andrés met up with chef Jose Enrique, whose eponymous restaurant has been called one of the best on the island. The two began working to send food trucks to the Puerto Rican neighborhoods most in need. As of Tuesday, Andrés has helped serve over 50,000 free meals to people in Puerto Rico. WCK estimates they will serve 100,000 meals by the end of this week. Like New York Magazine’s Grub Street states, that’s the equivalent of about 3 percent of Puerto Rico’s population.

Don’t see any restaurants in your area but still want to help in World Central Kitchen’s relief efforts? You can donate directly here to help “fund food, fuel, chef travel, and logistics” at WCK continues to help feed hungry people.

Do You Live In L.A.? Here’s Another Way You Can Pitch In By Eating Out

LA Loves Puerto Rico is a week-long event in Los Angeles using the power of food to help support relief efforts in Puerto Rico. Starting this Saturday, October 7, over 50 restaurants and bars in the L.A. area will be serving special food and drink options in participation with LA Loves Puerto Rico. 100 percent of the proceeds from these specials will be donated to Unidos Por Puerto Rico, an initiative from First Lady of Puerto Rico Beatriz Rosselló to support people affected by Hurricane Irma and Hurricane Maria.

If you’re in Los Angeles and plan on eating out in the next week (which is probably most if not everyone), do so at one of the places participating in LA Loves Puerto Rico and make sure you order off their special menu. You can literally eat a poke bowl or have a cocktail — something you’d likely be doing on a Saturday night anyway — and help support a good cause.

Not in the L.A. area but still want to help? You can donate directly to Unidos Por Puerto Rico here. 100 percent of the initiative’s proceeds go to disaster relief. You can help spread the word about LA Loves Puerto (and also drool over their food pics) by following them on Instagram and Twitter.

Food already brings us together on a regular basis, usually with friends for an after-work happy hour or family for a celebratory dinner. Through these two efforts, it’s also helping unite us with people across the country, feeding our fire to help while helping feed the world.