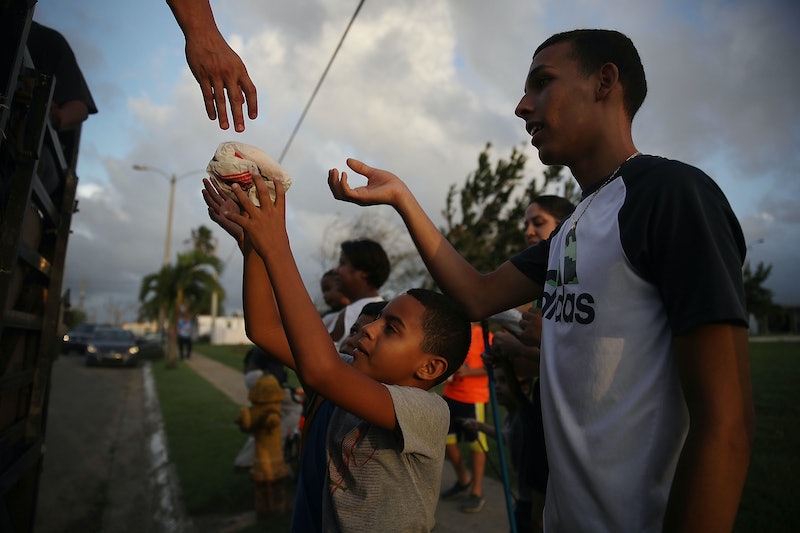 A few days after Hurricane Maria made landfall on Puerto Rico, I set about making arroz con gandules for dinner at home in New York. The recipe is simple: rice, pigeon peas, a little bit of ham, sazón Goya, but actually making it is complex; it’s a comfort food I eat only when I’m with family in San Juan, and eating it both assuages and heightens the anxiety I have for my family. For myself and other Puerto Ricans living in diaspora, food provides a tangible connection to a home that is without electricity, without water, with dwindling food and gas supply, and, crucially, without the ability to communicate. Cell towers are down all over the island; many people are still unable to get in touch with family over a week after Hurricane Maria came and went. Recovery will be slow-coming, with federal aid trickling in, but thanks to grassroots efforts, it's on its way. And a number of chefs both on and off the island are using food to recover after Hurricane Maria — and to resist.

Alicia Kennedy, a food writer in Brooklyn, NY, helped organize a food-centric fundraising event along with Maria Grubb, chef at Gallo Negro, a restaurant in San Juan’s Santurce neighborhood. After Maria hit Puerto Rico, Grubb found herself stranded in Florida, and added Kennedy to a Facebook group that had formed in order to help get money to people in the hospitality industry in Puerto Rico. “I tweeted that I was in this group, in case anyone had ideas to help, and somehow Lin-Manuel Miranda retweeted it,” Kennedy tells Bustle. “The owner of The Brooklyn Kitchen, Taylor, saw it and offered us her space. From there, we've pieced it all together.” The proceeds from the event — appropriately named “Eat It, Maria” — will be donated to Service Santurce, a nonprofit aimed at helping hospitality workers that’s “still being formed as quickly as possible following the storm,” according to the event page.

The push to support service workers in particular is of great importance; because of colonial policies that have restricted the island’s independent economic development, tourism and hospitality are major industries on the island, and both have been hugely impacted by Maria. “Tourism doesn't happen without hospitality, and the hospitality of Puerto Rico is so singular and grounded in joy and generosity,” says Kennedy. “To lose the genius chefs and bartenders and creatives who have been working so hard to cultivate a sustainable food culture, one that appeals to locals and tourists alike, would be a true tragedy.”

On the island, acclaimed local chefs like José Enrique (of the restaurant José Enrique, also located in Santurce) are rolling up their sleeves to provide relief the best way they know how: through cooking. Enrique is feeding about 100 people for free a day, as Eater reports, with hearty Puerto Rican dishes like sancocho, a kind of stew made with ingredients that don’t necessarily require refrigeration, like rice, yucca, and smoked ham. He has also teamed up with Spanish-American chef José Andrés (known for pulling his restaurant out of a certain D.C. hotel) and local food truck owners to deliver food across the island, including to hospitals and isolated areas.

Grassroots efforts like these demonstrate Puerto Ricans’ resilience and readiness to roll up their sleeves and just do the work. Even San Juan’s mayor, Carmen Yulín Cruz, has been widely praised for her personal efforts to help secure the island, going out in waist-deep waters with a bullhorn to help her fellow citizens, and appearing on national TV in a shirt reading “HELP US WE ARE DYING,” when the federal government has been sluggish — at best — in their response.

Even if what the island needs most badly at the moment is fuel, power, and the restoration of communications, the bottom-up effort to rebuild through food is a literal testament to the life-saving importance of community, both on the island and the mainland.

“I see food as comfort, as resistance, as revolution,” says Kennedy. “We are serving dishes that will remind Puerto Ricans of home, using ingredients almost exclusively donated by New York farms. This is a community effort, and I hope that comforts anyone who feels especially far from home right now.”

If you want to help victims of Hurricane Maria, there are many organizations that are working to coordinate the delivery of supplies to the island. Bustle has compiled a list of organizations arranging relief efforts, and another that is specifically helping women. You can also contact your representatives and urge them to fast-track relief for Puerto Rico using Diasporicans’ template. And above all, don't forget that every little bit counts.