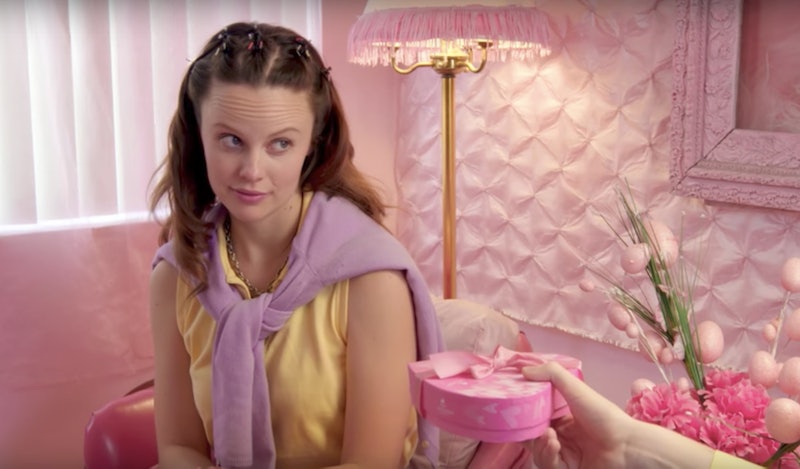 There are ways of dipping back into the mindset you had as a kid. You can find old diaries, online journal entries, school papers, and Tweets. But you may never find a mental time capsule quite as perfectly preserved as City Girl, the romantic comedy written by Sarah Ramos when she was 12. She found it as an asult, and instead of laughing off her early effort and putting it in a scrapbook, the Parenthood and Midnight, Texas star decided to put it into production. The web series of the same name is faithful to the City Girl script, and to a young Ramos' concept of what it must be like to be an independent adult woman. The messages romantic comedies telegraph to and about women are on bold (and very pink) display in the series, since it was written by a super-fan who was too young, at the time, to examine their meaning. In an interview with Bustle, Ramos reflects on how her youthful concept of a rom-com heroine was a "stereotypical insecure woman."

"I think you can also see in the writing of City Girl that I had really internalized societal norms for women too," Ramos says. It's easy to imagine the 26-year-old as a Reese Witherspoon-obsessed preteen; the actor swivels playfully in her chair as we talk and has a laugh that can only be described as a grown-up giggle. "Like Casey Jones orders a salad and loves it, and she’s insecure about her age, and she’s getting migraines. Like, her life is kind of sh*tty."

"It’s interesting, because, as a child, you’re not really responsible for the societal norms that you have inherited."

Ramos plays Casey in City Girl — a single gal with a furniture store, a non-threatening male best friend, and two scene-y employees. When her migraines become too much to bear, Casey seeks out the help of Dr. Foley, who turns out to be cute, single, and the polar opposite of the off-again/on-again boyfriend who's so clearly not right for her. Watching the story unfold is a delight because the adaptation is so literal — that's where the comedy comes from — and also because Ramos obviously retained and could successfully reproduce the fundamental tropes of the genre, both positive and problematic.

Not all movies that fall into that genre are reductive and built on harmful stereotypes, but the patterns that emerged for the budding artist during the romantic comedy boom of the '80s and '90s resulted in her heroine exhibiting some behaviors that make Ramos laugh now. And though she stresses that didn't decide to film City Girl "for any profound reason," in the process of doing so, she found that her writing and characterization exposed something about the way media talks to girls.

"It’s interesting, because, as a child, you’re not really responsible for the societal norms that you have inherited," she says. "And you can see that in the writing. I didn’t just decide that a girl should be... like a 28-year-old should be insecure about being 28. I was just like 'Yeah, women need to be young!'"

City Girl is not just a comic nostalgia exercise but a living piece of media criticism.

The word-for-word adaptation of her script also keeps Justin in tact — another doctor at Dr. Foley's practice and a flamboyant, boa-wearing gay male stereotype. It would have been easy to soften those offensive edges for the web series, but keeping the character as-written is what makes City Girl not just a comic nostalgia exercise but a living piece of media criticism.

"I guess that was just what was available in the media at the time," Ramos reasons. "I mean, thankfully it’s funny now in a dark kind of way, that a child would assume that that’s what a gay character would be like. But I think it kind of shows how far we’ve come, but we obviously have a long way to go."

Despite its shortcomings, it's evident in City Girl, and in talking with her, that Ramos still has an affinity for romantic comedy. The mere existence of the script speaks to the genre's impact on her; it inspired her first major creative endeavor. That's no small thing.

"I think I really loved the women who were in the rom-coms, and they were the movies about women that I saw," Ramos remembers. "I reference Legally Blonde as a movie... I remember seeing that movie and being like, 'Well, I know what I wanna do with my life. I have to do that,' somehow, not even knowing what 'that' meant.”

In 2017, the women who grew up consuming these movies are now in a position — both creatively and intellectually — to deconstruct them. (Because there's nothing wrong with loving rom-coms and being aware of their faults.) Ramos is in good company, as she cops to being "obsessed" with Crazy Ex-Girlfriend, Rachel Bloom's dark, musical subversion of the genre. I have to ask if Ramos is planning on taking what she's learned from revisiting City Girl and turning it into an actual feature romantic comedy script, and it seems like that's a definite possibility — someday.

"Absolutely. Oh my god, yes, 100 percent," she confirms. "I’m currently writing a script that’s more like a romantic tragedy, so it doesn’t end as you might hope. But yeah, I definitely would."

Whoever Casey's successors might be, Sarah Ramos probably won't be saddling any of them with an aging complex or chronic migraines. Because when you look back how some films geared towards women actually treated them, you can't help carrying the banner for more multi-dimensional female characters.