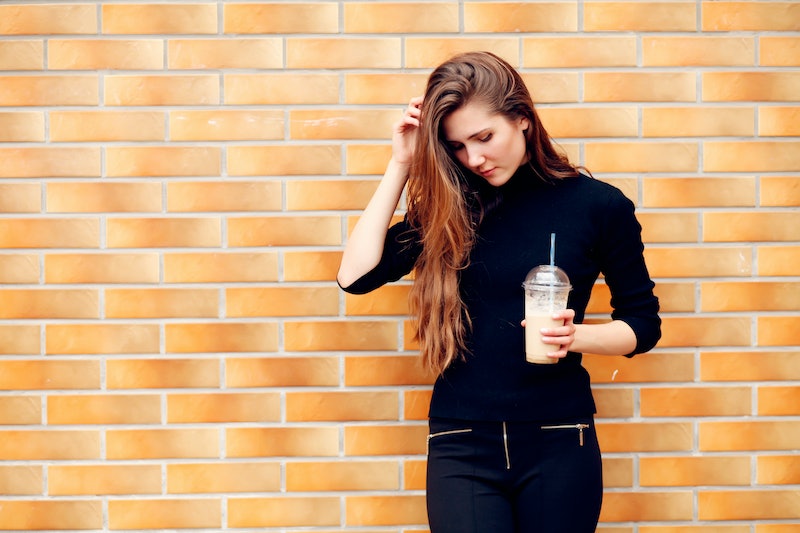 As you may know from the barrage of tech dramas, miscommunications, and scheduling conflicts that we're all collectively experiencing, we're in the middle of a Mercury retrograde period. Yep, it's happening again. Mercury retrograde summer 2019 already started on Jul. 7, but it'll be going strong the end of the month, when it finally stations direct on Jul. 31 after more than three long weeks of drama. While this particular Mercury retrograde will affect some zodiac signs more than others, we'll all feel the effects in some way. And because Mercury is hitting every sign a little differently, we could all use a little bit of astrologically-personalized advice on how to navigate this confusing, messy, and decidedly annoying transit. Today's topic: How Taurus zodiac signs can survive Mercury Retrograde this summer.

As far as things go for you, Taurus, Mercury retrograde periods in general tend to majorly test your patience more than anything — and this summer's backspin is proving to be no exception. On a less-evolved day, a Taurus can be more than a little bit stubborn (no shade here, y'all, just love!). You are represented by the steadfast bull, after all. So when plans start falling apart, conversations end up going in the total wrong direction, your tech devices randomly fail on you, and traffic jams seem to creep up on you for no reason at all, you can bet you're going to start feeling cranky.

"You aren't used to being impatient, so this retrograde cycle really throws you for a loop," wrote Horoscope.com of the classic Taurus' experience during Mercury Rx. "Not only are things not going that well, but now your typically calm attitude is off too. Frustrating, right?" Um, yeah, you can say that again. While this retrograde period shouldn't be too dramatic or life-altering for you, Taurus, it is bound to be irritating and has the potential to put you on a hair trigger for annoyances and tendencies that you'd normally not need to worry about.

Bustle chatted with astrologer Lisa Stardust to get the dish, and I've put together a few things Taurus should and shouldn't do during Mercury retrograde summer 2019 so you have a lil' bit of direction when it comes to surviving this astrological mess of a month. Ride that bull right out of retrograde and right into Mercury direct, Taurus — I believe in you! Here are a few trusty do's and don'ts for our favorite Venus-ruled earth sign babies.

DO: Let Go Of The Past & Make Room For Fresh Starts

Now is not the time to be stubborn about clinging to the past, Taurus. "You’re letting the past go and revising your future endeavors," shares Stardust. Mercury retrograde is all about reviewing, reassessing, and revising your current decisions and where you're at in life. Allow for the winds of change to sail you toward a possible new direction. It's important for you to stay open during this transit to allow your higher self to be able to pick up on the universe's clues as to what might be next for you. Make room for new possibilities that'll come post-retrograde.

DON'T: Allow Anyone To Get In The Way Of Your Goals

If you've been working toward some longstanding goals, you might encounter some roadblocks during this retrograde — but do not let it deter you from following your heart! "You’re not letting people stand in your way of success," explains Stardust. Damn straight, Taurus. While some people in your life may not understand what you're working toward or why, you needn't focus on them or what they think. Don't let anyone's opinions, fears, or concerns sway you from the things you know are right for you in your heart. Sticking to your truth is going to pay off in the long run.

Communication is a mess during this retrograde, Taurus, and we all know it. That said, your boundaries are going to be tested here, and open communication is likely to be the only solution. Don't freak! This just means you're going to need to devote extra time, energy, and consideration to each and every serious conversation that comes up to ensure it runs smoothly. "You’re using your words to take your power back and setting boundaries within partnerships," explains Stardust. "This means you’re saying what you mean and meaning what you say." Let honestly guide you here — honesty and tact, of course.

DON'T: Say Yes To An Ex Who Isn't Worth Your Time

Oh, the dreaded zombie-walk of lovers' past that inevitably comes hand-in-hand with Mercury retrograde. Your exes are likely to make an appearance in your life at some point during this month's transit, but according to Stardust, you need to think long and hard before you open the door back up to someone who may not deserve your time. "Don’t make up with a partner who isn’t up to snuff," warns Stardust. "You may be inclined to reconcile with an ex who broke your heart. Don’t. Chances are they haven’t evolved." Mercury retrograde has a way of confusing us, so be careful about who you choose to let back into your life right now.

DO: Think Before Making Any Decision, Big Or Small

If I could put clap emojis between every word of this header, I would, because I mean this one. While Tauruses usually subscribe to a "slow and steady wins the race" mentality, you're getting turned fully upside down by Mercury retrograde and it's causing you be overly spontaneous and rash. Pump the brakes, kiddo! "Usually careful and considered, you make impulsive decisions during Mercury retrograde which just doesn't jive with your rational way of going about things," explained Horoscope.com of Taurus during Mercury retrograde. Being a little spontaneous is fun — but being overly impulsive, especially during this transit, can get super sloppy, super quickly. Exercise some of your classic long game self-control and reign in your impulses.

OK, here's the deal: Mercury retrograde plays tricks on us. It puts snags into plans like no other. It makes us more likely to hit traffic, miss a notification, or accidentally tell someone to meet us at the wrong place or time. It makes us more likely to misunderstand someone's intentions, too. So if you notice social gatherings (or even work meetings) getting messy, remember that it's probably the retrograde in action. "When planned get-togethers go awry, you may blame the wrong people or things," warned Horoscope.com. "Avoid misplaced anger." Don't lash out at people if you can help it. Chances are they're just as frustrated about the scheduling errors or planning difficulties as you are, so blaming them isn't going to get you anywhere.