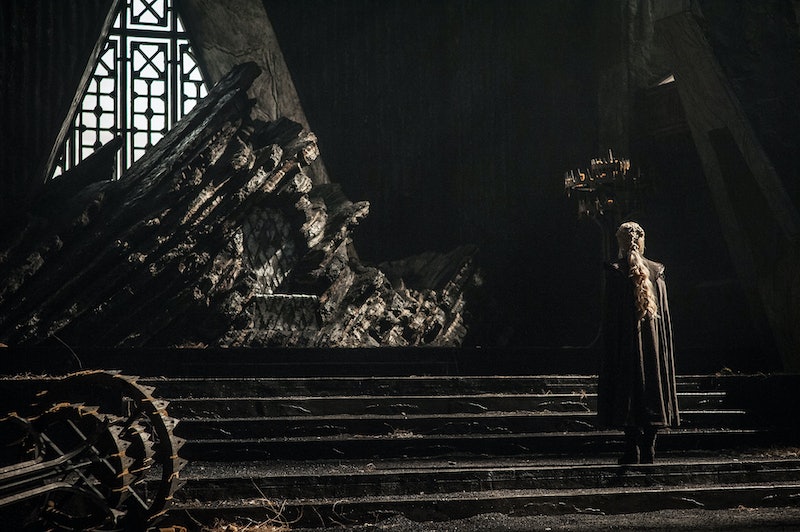 A lot of information can be gleaned from Game Of Thrones episode titles; so what is "Dragonstone," the Game Of Thrones Season 7 premiere title, referring to? Sometimes the titles are literal: like "The Children," with its focus on the Children of the Forest, as well as the younger generation of Westeros coming into its own. Sometimes they're metaphorical: like "Kill The Boy," inspired by Maester Aemon's advice to Jon Snow. Sometimes they're referential: like "Winter Is Coming," which borrowed its words from the House Stark motto. So which kind is "Dragonstone," and what does it mean?

The Season 7 premiere title appears to be of the literal variety; Dragonstone is the name of the island on which Daenerys makes her first landfall in Westeros after setting sail from Essos in the Season 6 finale. And stopping by Dragonstone before heading to the mainland of the continent makes a lot of sense, given the island's storied history.

Situated at the mouth of Blackwater Bay, Dragonstone is prime real estate when it comes to access to the rest of Westeros. In fact, Aegon the Conqueror used Dragonstone as the staging grounds for his conquest of the Seven Kingdoms… so it's only right that his descendant, the last Targaryen, would use the island to do the same.

But Dragonstone's history goes back even farther than Aegon. During the height of Old Valyria, Dragonstone became the westernmost outpost of the Valyrian Freehold. The Valyrians used their infamous combination of magic and metallurgy — the same skill they use to forge Valyrian steel — to build a fearsome stronghold on the island, melting the stone of the island itself and twisting it into a massive castle covered in decorative dragons.

200 years later, little Daenys of House Targaryen — a minor house in Old Valyria — had a prophetic dream that foretold the Doom of Valyria, a cataclysmic event that would wipe out the massive empire and drive the dragons all but extinct. So her father, Aenar Targaryen, uprooted his family and their dragons and relocated them all to Dragonstone; 12 years later, the Doom struck and the Targaryens were the last remnants of the Valyrian Freehold.

Six generations later, there came a Targaryen prince named Aegon. He toured the Seven Kingdoms of Westeros and envisioned them as one united continent. He had a massive table carved in the shape of the realm, depicted with no borders, which still resides in the Chamber of the Painted Table on Dragonstone to this day. From that Chamber, Aegon planned his conquest of Westeros, believing it to be his destiny — as one of the last descendants of an ancient empire — to build a new empire for himself and his family.

So Aegon the Conqueror and his two sister-wives, Visenya and Rhaenys, swooped into Westeros from Dragonstone on the backs of their massive dragons, Balerion, Vhagar, and Meraxes, and united the Seven Kingdoms under Targaryen rule. Aegon built a new stronghold for himself at the mouth of the Blackwater Rush, called the Aegonfort, in order to rule Westeros from the mainland. Eventually, a city rose around the fort, the fort was built up into a massive castle — and it became known as King's Landing and the Red Keep.

With the Targaryen monarchs moved from Dragonstone to King's Landing, the island became the family's secondary outpost and the traditional seat of power for the Targaryen heir until he inherited the crown and moved to King's Landing. The Targaryen reign lasted for almost 300 years before Robert's Rebellion broke out, and it ended when Jaime Lannister stabbed Mad King Aerys in the back.

Before he died, King Aerys dispatched his sister-wife, Queen Rhaella, to the relative safety of Dragonstone. At the time, the royal couple had two sons — Prince Rhaegar, who had just been killed at the Battle of the Trident, and little Viserys — and Rhaella was pregnant with a third child. After arriving on Dragonstone, Rhaella gave birth in the midst of the mightiest storm in living memory; she died bringing Daenerys Targaryen into the world, forever after earning Dany the nickname "Stormborn"… which also happens to be the title of Season 7's second episode.

Once Aerys was dead and it was clear that the Rebellion was coming to an end, the garrison at Dragonstone conspired to hand over the young Targaryen siblings to Robert Baratheon in exchange for their own lives. But Aerys' former master-at-arms Willem Darry, a fierce Targaryen loyalist, saved Viserys and Daenerys, smuggling them out of Dragonstone and across the Narrow Sea into exile in Essos. Five years later, Darry fell ill and died, leaving the last two Targaryens alone in the world to fend for themselves.

Meanwhile, Stannis Baratheon and his fleet took the undefended Dragonstone. New King Robert bequeathed Storm's End (the traditional seat of House Baratheon) to his youngest brother Renly, and gave Dragonstone to middle brother Stannis — a gesture that was certainly intended as a reward, but which Stannis took as a great insult. From thereafter, Dragonstone remained a Baratheon outpost… until Daenerys arrives and reclaims it for House Targaryen in the Season 7 premiere.

In examining the history of Dragonstone, it should also be noted that the volcanic island boasts within its stone a vast reserve of dragonglass: the material also known as obsidian, which — along with Valyrian steel — is one of the only known weapons that can kill a White Walker. After Jon Snow lost the sack of dragonglass daggers during the assault on Hardhome in Season 5, he mourned to Sam, "No one's ever getting that back now. It wouldn't have mattered anyway, unless we had a mountain of it." (Emphasis mine.)

Will Daenerys be as successful as Aegon in her attempts to invade Westeros from Dragonstone? What role will the island itself play in the upcoming war against the White Walkers? With Season 7 just around the corner, answers should be coming as quickly as the impending winter.

More like this
Does 'Locke & Key’s Ending Mean There Could Be A Season 4?
By Sophia Moore
Everything To Know About 'Evil' Season 4
By Meguire Hennes
Netflix Just Rebooted A Classic ‘90s High School Drama
By Maxine Harrison
‘Squid Game’ Creator Hwang Dong-Hyuk Just Dropped A Major Season 2 Tease
By Brian Anthony Hernandez and Bustle Editors
Get Even More From Bustle — Sign Up For The Newsletter