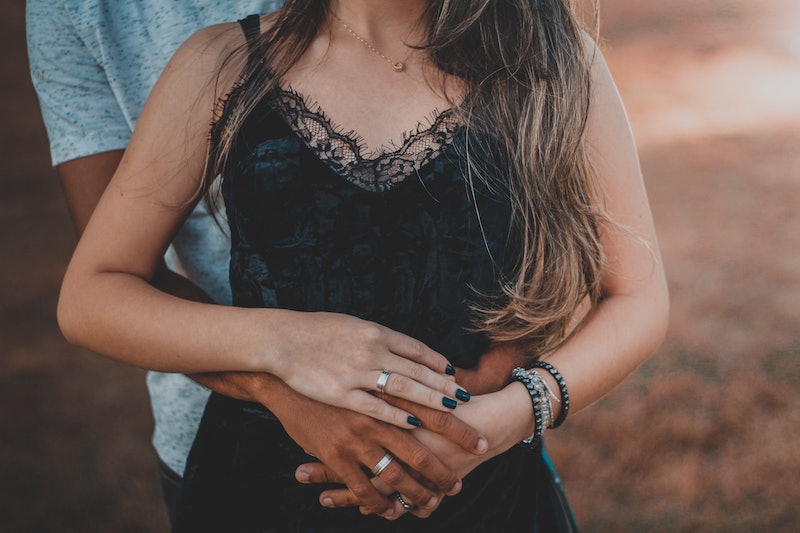 We’re always hearing that we could be having better sex, a better orgasm, or a better relationship. But how often do we hear the nitty-gritty of how we can actually better understand our deepest desires and most embarrassing questions? Bustle has enlisted Vanessa Marin, a sex therapist, to help us out with the details. No gender, sexual orientation, or question is off limits, and all questions will remain anonymous. Please send your sex and relationship inquiries to tips@bustle.com. Now, onto today’s topic: period sex.

Q: “My boyfriend and child's father used to enjoy period sex. It was never a big deal to him, and it wasn’t a big deal to me either. We just kept having sex like we would during the rest of the month.

Just last month, he said he feels squeamish about period sex. I was so surprised by him saying that, I didn’t really say anything in the moment. We didn’t end up having sex for the whole time I was on my period, and it sucked! I am all for no oral sex during that time, but no sex at all would be hard for me.

I’m so confused. He used to not have any problems with period sex. What changed? I’m just wondering - is it me? Did I do something wrong?”

A: Thanks for the question! Some people have strong opinions about about period sex, but the story I typically hear in my sex therapy practice involves someone who felt squeamish initially, but eventually realized that period sex is really not that big of a deal. I’ve actually never heard a story about someone who used to enjoy period sex, but then developed a squeamishness about it. I can’t tell you for sure what’s going on with your boyfriend, but I can guide you through how to approach it with him.

First thing's first — I don’t know why your boyfriend changed his opinion about period sex, but it is in no way your fault. Your period is normal and natural. You guys have had period sex before, so you know it’s easily manageable and just as fun as sex any other time of the month. The only way this would be your fault is if you purposefully did something to try to make him feel grossed out, but the chances of that seem pretty small!

Ask Him For More Info

Your boyfriend caught you off-guard when he first mentioned being squeamish about period sex, and you didn’t wind up having a conversation about it in the moment. That’s understandable, but just because the conversation has passed doesn’t mean you can’t bring the topic up again. Skipping period sex entirely would be a pretty significant change to your sex life, so this is definitely something you guys should talk about more than just once.

I would recommend saying something like, “I know you mentioned the other day that you’re feeling squeamish about period sex. We never ended up having a conversation about it, so I wanted to bring up the topic again. Can you give me a bit more detail about what you meant? I know we used to have period sex before, so I want to understand what’s changed for you.”

Be Sensitive, And Expect Sensitivity In Return

Period sex can be a tricky thing for couples to talk about since it involves periods, which are pretty damn personal. Your boyfriend is entitled to have his preferences and experiences, but he needs to take care not to shame you for your perfectly normal, natural bodily functions. Even using the word “squeamish” is verging on disrespectful territory, so I want to help you steer the conversational ship back into safer waters.

You can try to set up an atmosphere of sensitivity and respect by approaching him thoughtfully at first. When you bring up the conversation with your boyfriend, try to stay curious and open. Don’t accuse him of anything; just ask him what’s going on for him. Notice how my suggestion above was, "I want to understand what's changed for you." You can even set him up for success by prompting him with something like, “I want to make sure we talk about this sensitively, since there’s nothing about my period for me to be ashamed of.”

I’m not sure what reasons your boyfriend will give for his period sex change of heart, but since he mentioned the word squeamish, it does seem like there is the possibility that he’ll say something that feels shaming to you. If that’s the case, you can say something like, “I’m going to stop you right there, because that feels like body-shaming to me. My period is normal and healthy, and I’m not ashamed of it. Can you try rephrasing that?”

Tell Him What You Want

In this conversation, it’s also important for you to let your boyfriend know that you want to continue having period sex. The first time he brought it up, you didn’t say anything, and the two of you wound up not having sex while you were on your period. He may have gotten the message that you’re cool with not having period sex any more.

I suggest being really clear and direct with him, and saying something like, “I don’t like having to go a whole week without having sex with you just because I’m on my period. I want us to continue having sex throughout the whole month.“

The good news is that there are plenty of ways to make period sex more comfortable for you and your boyfriend. I’ve written about this in the past. When you and your boyfriend are talking about period sex, say something like, “what can we do to make it more comfortable for you?” That helps him get the message that you’re willing to make some changes in your sex life, but you want to continue having period sex.

Here are some things you can try:

None of these suggestions take very much effort, but they can all make a pretty big impact on your comfort levels in the moment.

More like this
Help! My Partner Only Wants Sex Late At Night & Won’t Compromise
By Sophia Benoit
16 Ways To Jazz Up Your Tinder Bio This Year
By Lexi Inks
Ask A Sex Therapist: Is My Sex Fantasy Normal?
By Madison Malone Kircher
Experts Say These 23 Things Won't Happen In A Strong Relationship
By Carolyn Steber
Get Even More From Bustle — Sign Up For The Newsletter