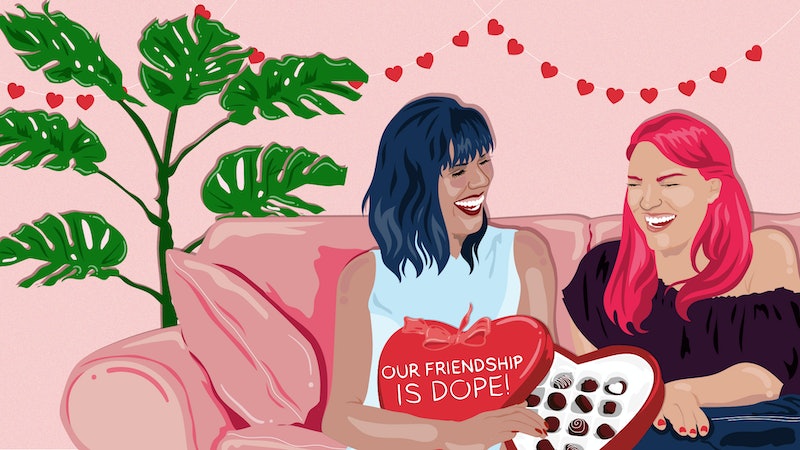 Valentine’s Day used to make sense to me. In elementary school, I’d go shopping for Scooby Doo or Teenage Mutant Ninja Turtles-themed cards with my mother to hand out to my classmates. Although we were told to hand out cards to everyone, I made sure to go the extra mile for my friends by taping a chocolate to the inside of the card and scrawling a personalized message. As we grew older, the ritual changed. We could now pick and choose to whom we wanted to give a Valentine’s Day gift, if anyone — and those choices quickly became the subject of school gossip. Suddenly, the idea of walking up to a friend, especially a male one, and handing them a Valentine’s Day card seemed nothing short of mortifying. Years before I’d ever heard of the terms aromantic and asexual, let alone identified with them, I realized that Valentine’s Day represented something that I seemingly couldn’t understand or be a part of.

Although Valentine’s Day may seem like a trivial holiday, it’s far from the only time that a social emphasis on romantic and sexual relationship contributes to a sense of alienation among aromantic and asexual people — people who don't experience romantic or sexual attraction, respectively. From a lack of media representation to invisibility in forums like sex education in schools, ignorance or a fundamental misunderstanding of our communities is pervasive. For instance, a Sky News poll of 1,119 British adults asked participants to define asexuality, and about 75 percent of them got it wrong or misconstrued it in some way. Even as people gradually de-center heteronormativity from our ideal of what love should look like, our society continues to struggle to disentangle obligatory romance and sex from the equation.

“We live in a society that places strict rules around love and lust,” sex educator Kenna Cook tells Bustle. “Being aromantic or asexual tends to be portrayed as an extreme option, like being a nun or a spinster. Aromantic and asexual folks often have their valid identities completely erased.”

These one-dimensional portrayals of asexual and aromantic people dehumanize our communities. Most characters that are typically thought of as aromantic or asexual, such as Sherlock Holmes, are notable for being perceived as robotic and unfeeling. Moreover, these representations fail to accurately capture the diverse forms of intimacy that we celebrate. Many of us participate in romantic and/or sexual relationships of varying types. Irrespective of orientation, many of us also place a lot of emphasis on platonic relationships, which tend to be socially devalued relative to romantic and sexual relationships.

“Asexual and aromantic people are told by society that they’re just late bloomers who will eventually come around to the ideas of sex and romance,” Cook says. “They’re told that they haven’t found the right person yet.”

There’s an incredible amount of diversity in the many ways that human beings love one another. Valentine’s Day, which is popularly thought to be a tribute to the patron saint of love (although it turns out that this perception is a product of Christian medieval legend rather than actual history), is meant to be a celebration of love. But traditions and outdated tropes should not constrain a modern understanding of what love looks like. The asexual and aromantic communities have just as much of a place within the scope of Valentine’s Day festivities as anyone else.

This is not to say that all of us identify with or feel a need to celebrate Valentine’s Day; that isn’t even applicable to everyone who experiences attraction. Some aromantic and asexual people have long felt excluded from Valentine’s Day due to its focus on exclusive, long-term romantic relationships, and don’t feel that it’s relevant to them in any worthwhile sense. Some people may dismiss it as a purely commercial holiday with no real purpose, because why not take advantage of every day to show affection to your loved ones? Still others may only see the worth of Valentine’s Day in the chocolate sales the next day. All of this is perfectly valid.

For me, Valentine’s Day is a day of appreciation for my platonic relationships, which I hold above all others. For others in my community, it may be a time to spend with their queerplatonic, romantic, or sexual partners. Whatever the case may be, the fact remains that aromantic and asexual people are just as capable of forming loving, meaningful relationships as people who don't identify with those terms — and that those relationships are worth celebrating.