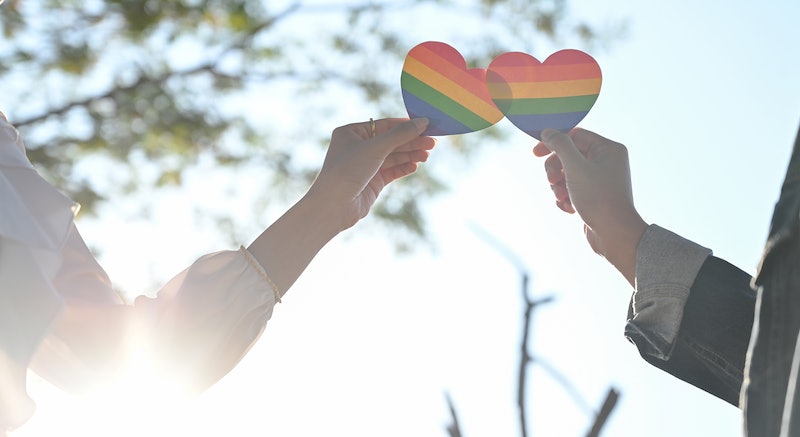 Valentine's Day can definitely be awkward in general. However, if you're an LGBTQ identified person, Valentine's Day can take on a whole other level of uncomfortable. The holiday, in our contemporary understanding, is a celebration of romantic love... which often relies on strict notions of gender norms and how they relate to relationships. Now, plenty of heterosexual and cisgender people don't celebrate Valentine's Day, or celebrate it in their own unique way. Plenty of LGBTQ people also celebrate Valentine's Day in a unique way, or don't celebrate it, or choose to follow it in a traditional path. Either way, whatever feels best to you is the right way to go! However, if you're an LGBTQ person and you try to follow the more traditional paths of Valentine's Day, you may run into some laughably awkward moments along the way.

Of course, there are some major issues left to battle when it comes to LGBTQ rights and equality. A little awkwardness here and there is not the mountain of injustice of our time. However, we live in the day-to-day world, and when heteronormative standards shape our expectations, it can be really isolating and frustrating to break our own space into the world. Here are some examples of challenges many LGBTQ people face during the Valentine's Day season:

Recently, there has been some progress made in this front: Hallmark, for example, released a series of cards and advertisements featuring same-sex couples for Valentine's Day. While this was met with some controversy, I do think it's part of a progressive trend that will continue over time. However, for LGBTQ people, picking up what should be a simple card is not always easy. Many cards come with assumptive pronouns and labels (it's near impossible to find a romantic card with the word a gender neutral word like "partner," for example) that can feel artificial or awkward if they're not what you use in your own relationship. Of course, people can make their own cards, but some people like picking up fancy cards. Also, some people wait until the last minute and are in mad dash to put together their gifts. Either way, the more options available for LGBTQ people, the better.

2. Getting a Gift Customized

Now, generally, the beauty of getting an item customized is that you can get most anything you want on it. However, if you're an LGBTQ person, you can face some very awkward situations when explaining to a customer service person, jeweler, or so forth what you're engraving, why, and to whom. For example, if your partner uses a nontraditional gender pronoun, or you're simply someone who may be read as heterosexual or cisgender, the person you're talking to may be very confused about your relationship. Of course, it's also possible they'll be entirely accepting or neutral about the whole thing; and either way, no one should ever have to "explain" their relationship to someone else. But until LGBTQ rights and LGBTQ individuals are more commonly accepted in society, it's always a risk that what should be a nice purchasing experience will turn into an awkward or hostile interaction.

3. Explaining Your Relationship to Your Server

Even on Valentine's Day, couples can be mistaken for being "just friends." While some people do celebrate Valentine's Day with their friends, it's a frustrating assumption LGBTQ couples often deal with when making dinner reservations or attending a couple's themed event. This is a problem because it can make couples feel invisible, or put people in an awkward situation on whether or not they want to "come out" to a stranger and correct them. This can be particularly tricky if you're in a relationship with multiple people who are going out to celebrate together, as it's even more likely people will assume you're all just friends. Now, some people prefer to keep their relationships very private, and are OK with that assumption. And that's OK! But others prefer more visibility, and feel like those assumptions can be isolating and minimizing.

Especially when Valentine's Day falls on a weekend, many couples like to book a romantic getaway at a hotel or bed and breakfast. If you're an LGBTQ person, however, this can open up some potential awkwardness. Often, if arrive at a hotel with a person of the same sex, or a person whose gender doesn't fit the binary, the hotel clerk will assume you're attending as friends and suggest a double bed, or booking a separate room.

This situation has happened at nearly every hotel I've gotten with my partner, for example. While it's usually fine to just say we want the king bed, or that a second bed isn't needed, it has sometimes raised some awkward questions, like, "Oh, but aren't you both staying?" or "Is the room just for one of you?" I think generally, people mean well with questions like these, but they can come across as microaggressions that non-LGBTQ couples don't tend to deal with. In the worst case scenario, however, there are many reports of couples being turned away from hotels because of their LGBTQ status.

All in all, more often than not, these interactions are awkward for a few minutes, then end without further harm. The bigger picture, though, is that while progress is happening in terms of LGBTQ rights, we still need to change the structural way we view the world, to be more inclusive of couples who don't fit the heteronormative norms and expectations embedded in society. Valentine's Day dinner may seem like a small example, compared to say, trying to buy a home, or trying to adopt a child, but these interactions can be representative of larger issues with LGBTQ acceptance and visibility.