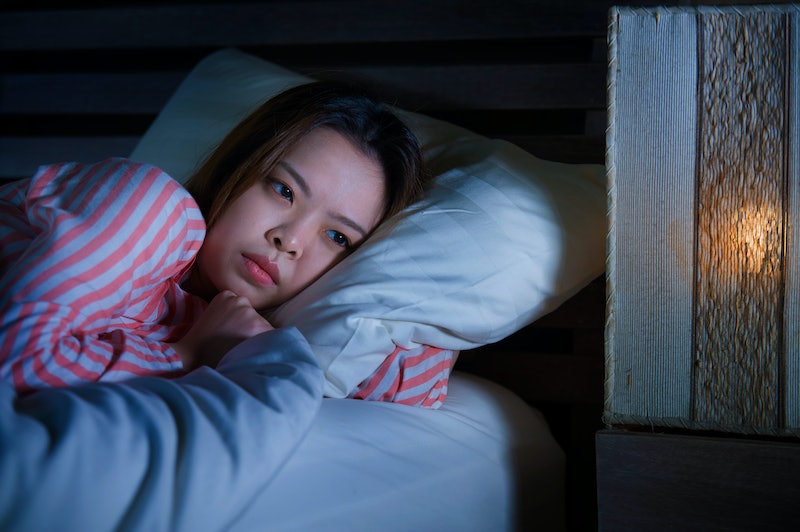 It's a harsh reality many of us have had to face: Waking up in the middle of the night, for seemingly no reason, and finding ourselves unable to fall back asleep. It's frustrating, confusing, and, if it's a frequent occurrence, it probably leaves you asking yourself, "Why do I wake up in the middle of the night?" Maybe you're even assuming that something might be seriously wrong if your sleep is continuously interrupted. For many, though, the answer might be simpler than you think.

"Waking in the night typically means that a person is overtired, and they are not getting enough sleep," Julia Walsh, a registered sleep consultant at Good Night Sleep, tells Bustle over email.

That said, waking up in the middle of the night is not uncommon. Sleep is not a straight line — instead it happens in cycles. Throughout the night we moving through five stages of sleep, according to the Mayo Clinic, falling deeper and deeper until we reach the final stage of REM sleep. Each sleep cycle lasts between 60 and 120 minutes (90 on average), and if something disturbs you as you are coming to the end of the cycle or "surfacing" — especially during one of the lighter stages of sleep — you are more likely to awaken.

While most of us will experience waking up in the middle of the night every now and then, if it persists, there may be other issues at play — and the potential consequences make it worth trying to correct.

"Waking up in the night disrupts your sleep, and can lead to health challenges including decreased memory and attention span, and challenges making decisions," Walsh tells Bustle. "Hand-eye coordination, as well as gross motor skills, become impaired, affecting the ability to do simple tasks such as walking, running, or even driving. Lack of sleep can be attributed to poor mood, and people often become more irritable with a lack of sleep. ... Finally, you are much more likely to become sick when your body is tired. Sleep is important for allowing the body to rest and gives the body the ability to fight off infections better. Your immune system functions much better with enough sleep."

If you're constantly wondering "Why do I wake up in the middle of the night?" the first step to correcting the problem is finding the root cause. If you find yourself waking up multiple times during the night and have trouble falling back asleep, you may be suffering from one of these issues.