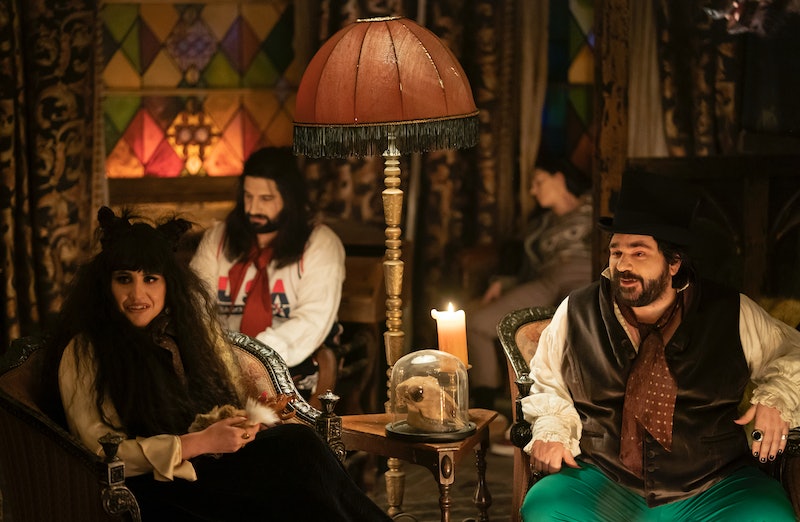 Ahead of its Season 2 finale on June 10, What We Do in the Shadows Season 3 is already a go. According to Deadline, the show was renewed in late May, with three episodes of the current season still left to air. FX was confident enough by then to give the series another run, in part because of how well the show has done on digital platforms lately. Hulu streams the show as well, introducing a whole new audience to the parody vampire show.

The Hollywood Reporter noted that the show has about 462,000 viewers who watch live on FX, making it the network's 10th most-watched show out of 15 series. But while those numbers are pretty middle of the road, What We Do in the Shadows has a total of 3.2 million viewers thanks to delayed viewing and streaming on platforms like Hulu — it's a 25 percent increase from Season 1. So even though live cable viewership has dipped from Season 1 by two percent, the show is up in a big way when it comes to overall viewership. No wonder FX renewed the series.

Viewership numbers aside, FX is pleased with the critics' positive response to the show. "We're incredibly happy that critics and audiences are all in on Shadows," FX President of Original Programming Nick Grad said in a statement to Deadline. "Week in and week out, the producers, writers and our amazing cast continue to make one of the funniest and best comedy series on TV."

The second season of the show has a perfect 100 percent critics score on Rotten Tomatoes, up from Season 1's 94 percent. It's not easy for a show to do better in its sophomore run, but What We Do in the Shadows did just that.

As for when the show will return, it's likely to be sometime in spring of 2021. The first season premiered in late March and the second season premiered in mid-April. Both seasons had 10 episodes, which can be expected for Season 3. The good news is that the show typically doesn't start filming until October, so the premiere date shouldn't be affected by any of the current production shutdowns unless they linger on for many more months. But no matter when the show starts up production, at least fans know that however Season 2 ends, they'll get to see more of Nandor, Laszlo, and Nadja sometime in 2021.