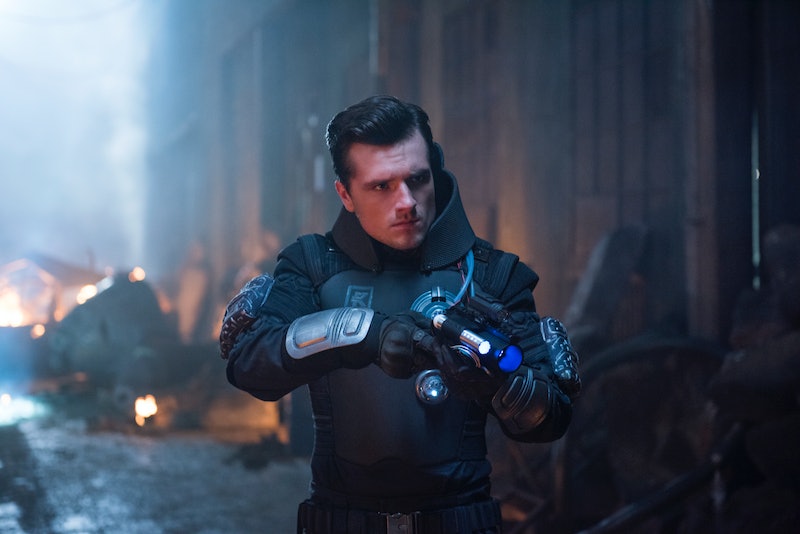 By the end of Season 1 of Future Man (series directing by: Nisha Ganatra, two episodes), Josh Futterman has finally become the hero he'd always hoped he could be. He not only taught two warriors from the future that murder is bad, he also managed to save the world from being overrun by the villainous Biotics, saving humanity in the process. Even though he ends the series behind bars for blowing up an entire building, Josh Futterman seems to be at peace. But the final few seconds of the show's debut season indicate that Josh's story is far from over, and now that Hulu has confirmed that there will be a Season 2 of Future Man fans will have plenty of new time-travel escapades to look forward to.

The finale of Season 1 of Future Man shows Josh relaxing in his prison cell, when blue bolts of lightning — like those that accompany people time traveling — start materializing. They grow louder and brighter and suddenly in a flash — the season ends. Who could it be? Why did they come back? Are they coming from the future or the past? The brief cliffhanger that concludes Future Man could lead to a whole multiverse of possibilities for Josh, but only Season 2 will be able to tell fans what happens next.

By the end of Season 1, it seems that everything is right with the world. The plan to save humanity from Dr. Kronish comes together (despite a few snags and a rogue brainworm) and Wolf and Tiger return to their time. Of course, Josh never gets to find out if everything turned out alright. He's stuck in a timeline that isn't his, pretending to be a version of himself that he isn't, resigned to spending his life in jail knowing that he got the job done. But what if he didn't get the job done?

The whole point of Future Man is that even the slightest change in the past can have a monumental effect on the future. Who is to say that something worse didn't end up happening after Josh stopped Dr. Kronish? It looks like someone is coming back in time to get Josh to try to save the world again, or correct a massive mistake that he has made. Josh Futterman spent most of Season 1 going back in time and watching it affect the present, but Season 2 could find him going in the other direction.

In Season 1, Future Man seemed to mean "a man from the future," as he went back through various decades attempting to stop Dr. Kronish's research. However, Season 2 could see that definition shift to take the show in a new direction. Fans have seen Josh go to the past, but Future Man could start to mean "a man in the future" should Josh get taken to Wolf and Tiger's time. When you've spent a whole season going back in time, what better place to go then the future?

Besides, if Josh did succeed at his goal, he'd surely like to see the civilization where he is heralded as a hero — or would there be no need to honor him since no one even knew the world was at risk. If the world never comes to an end, will post-apocalyptic warriors Tiger and Wolf be horribly out of place? If no one ever needed to go back in time to save the world, would no one have ever invented a time machine meaning that Wolf and Tiger never could've gone back in time to get Josh to stop Dr. Kronish in the first place? As Wolf so elegantly says, "time travel is a mindf*ck." Whatever lies ahead for Future Man Season 2, it looks like Josh still has a lot of time before he can finally relax.