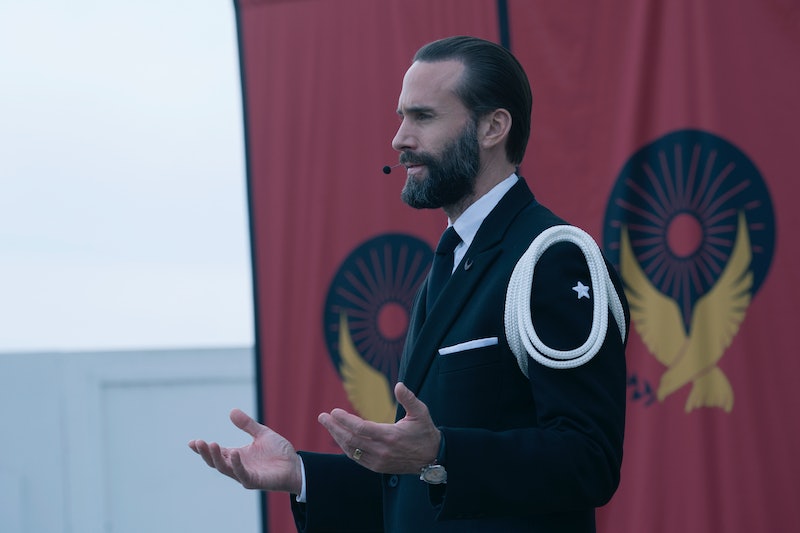 He's in Canadian custody, and Serena's American friend Mark listed off a slew of charges against him after luring him across the border and ambushing him with international troops. There doesn't seem to be any escape, given the surveillance he's under, and it's likely that he'll probably stand trial. What exactly that looks like is hard to say, given how little viewers still know, even three seasons deep, about the legal relationship between Gilead and the rest of the world.

One thing seems certain — it's unlikely that Fred has anyone coming to save him. Commander Winslow was the only other person we've seen Fred meaningfully interact with or attempt to form a personal alliance with, and he's dead. Some are speculating that prison is the best case scenario for Fred at this point, especially with how luxe that holding cell looks.

"If you think about it, he doesn’t have any friends apart from Gilead," wrote Reddit user ernfio. "If he goes on record to say he was willing to betray them then what happens if he gets released? He can’t stay in Canada, he will be rearrested. He can’t go back. He’s better off in his plush Canadian cell."

Mark did say that while Fred would be held in Canada, he "may ultimately be transferred to the jurisdiction of the International Criminal Court." Some viewers think that might lead to something like what happened after World War II when the Nazis stood trial, and several different nations came together to form their own joint way of prosecuting war crimes. Canada and the United States would certainly work together, from what we've seen, but it's difficult to say what other countries would support prosecuting Gilead officials.

What matters the most is that Fred probably won't be able to weasel his way out of receiving any punishment. Without friends or allies, and without even his wife, he's probably not going to be able to escape the law. And even if he cooperates with Canadian and American authorities, hands over Gilead secrets, or assists in their military strategy, his crimes seem far too great in number and far too severe to be ignored or diplomatically made irrelevant.

Whatever legal events unfold, The Handmaid's Tale certainly has the expert advisors to make a plot like that as realistic as possible. According to The Hollywood Reporter, journalist and United Nations executive Andi Gitow serves as a consultant for the show, and also happens to be cousins with showrunner Bruce Miller.

She's helped to advise storylines about children being taken away, human rights being violated, and the individual stories behind large-scale travesties, and would likely either have the existing knowledge or know who best to ask about how international court would proceed. "We deal with so many very complicated issues," star Elisabeth Moss told THR. "We want to make sure that we get them right and portray them accurately, because they are really true to life."

This whole situation with Fred and Serena, not to mention the plan June's hatched to get children out of Gilead, has set the season finale up to be pretty bananas. Hopefully when all is said and done, we'll finally have some answers.