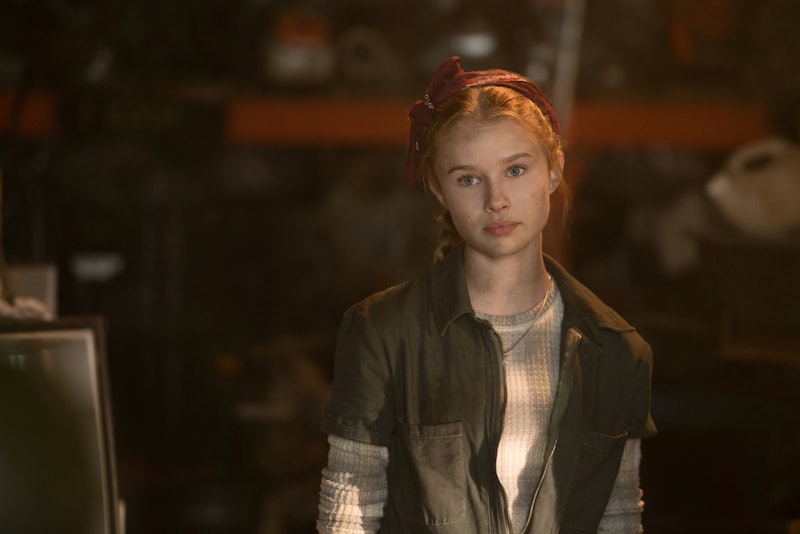 Spoilers ahead for Riverdale Season 3, Episode 18. Jughead thought poking the bear with his mother's drug trade was a good idea, but now that the Gargoyle King kidnapped Jellybean on Riverdale, it could end in disaster for his sister. The youngest Jones was introduced to G & G on the April 17 episode, and her quests escalated a little too quickly. At the end of the episode, Jellybean was brought into the forest to meet the Gargoyle King, and that can't be good.

Yes, the Gargoyle King is still a thing, and we still have no real idea who it is. Tall Boy was the previous Gargoyle King, but since he's dead now, someone else must have taken up his post. Or the original Gargoyle King, who tormented the Midnight Club all those years ago, is officially back in action. Whatever the case, I think Jughead and Jellybean's mom, Gladys Jones, could be the one hiding behind the costume. FP may think that the town's drug kingpin is still Hiram Lodge, but there's been a new game in town for a while. Jughead hasn't yet told his father what his mom's been doing, and he may never get the chance if Gladys pulls this G & G scheme off.

My theory is that Gladys, desperate to get Jughead and the Serpents to stop messing with her drug business, is making things personal. Kurtz told FP and Jug that killing Baby Teeth was just the warm up "to the ultimate quest," and that "one final game" was demanded by the King: "save the little princess."

The princess in question seems to be Jellybean, and Kurtz seemed more than happy to deliver that news to FP and Jughead. In fact, he seemed like he wanted to get caught in order to relay that message. Fizzle Rocks buyers started reporting that Kurtz swapped places with their usual dealers and sold them tainted drugs — seemingly in an attempt to get on Sheriff FP's radar. It worked, Kurtz got caught, and he told the Joneses about the Jellybean quest.

If you're wondering why Gladys would involve her daughter in all this, don't. Gladys may love her kids, but she also has a twisted sense of parental protection. She knew Jughead wasn't going to stop trying to raid the drug dens, yet she armed her Gargoyles with guns. There's a real chance Jughead could have died at the hands of Gladys' own gang.

However, Jellybean is likely in less danger. If Gladys is wearing the Gargoyle costume, she'll make sure no real harm comes to her daughter. She just wants to scare Jughead and FP into leaving the Gargoyles (and their drug business) alone. It's even possible that Jellybean is in it, since earlier in the season, Gladys told her that they had everyone right where they wanted them.

Gina Gershon, who plays Gladys, previously told Entertainment Weekly that Gladys has "her own moral code." Dressing up as the Gargoyle King and inventing a Jones-specific quest would definitely classify as that, since it involves scaring her family in the name of dealing drugs. But at the end of the day, Gladys is running the Gargoyle show and she's not going to let any real harm come to her kids (hopefully). "She has her own agenda. At the same time, she's a very, very protective mama," Gershon promised. So don't worry too much about Jellybean. As long as the Gargoyles are under Gladys' thumb, the Jones family should be just fine.