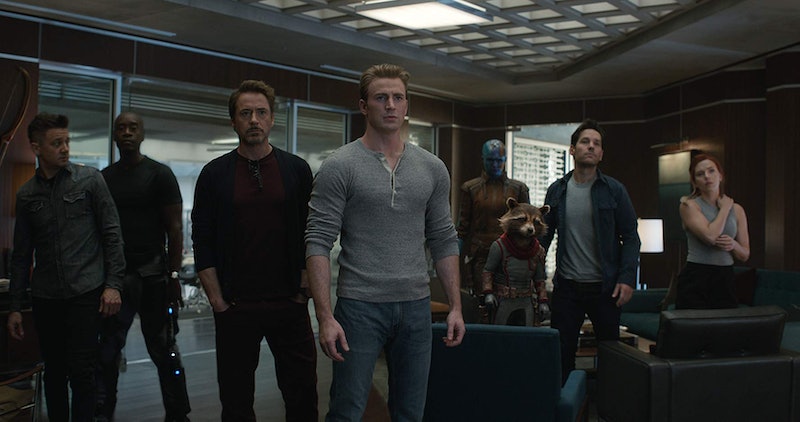 Over the course of 11 years, the Marvel Cinematic Universe has given us 21 blockbuster films, all intertwined with one another in their story and timelines. The general order of the movies is relatively easy to follow, but from the very first Iron Man movie released in 2008 to Avengers: Endgame premiering on Apr 26, it seems that the official MCU timeline (in terms of specific years) has blurred. So what year does Avengers: Endgame take place?

Endgame picks up where Infinity War left off, and follows what's left of the team as they try and undo the damage Thanos did by erasing half the population of all living creatures with the snap of his fingers. The movie has been rumored to be set exactly five years after the snap, but there hasn't been any official confirmation of this.

There's a hint at the end of the official trailer for the fourth Avengers film. We see a clean-shaven Captain America (Chris Evans) and blonde Black Widow (Scarlett Johansson) sitting at the Avengers headquarters, when Scott Lang (Paul Rudd) suddenly appears on the surveillance cameras. He seems to have made his way out of the mysterious Quantum Realm, where he got stuck in the post-credits scene of Ant-Man and the Wasp.

Lang also says in the trailer, "Hi, is anyone home? This is Scott Lang. we met a few years ago at the airport, in Germany? I got really big. Ant-Man. I know you know that… That’s me. Can you buzz me in?"

Here, Ant-Man refers to the events in Captain America: Civil War, which was released in 2016 — and is supposedly also set in 2016 — as "a few years ago." And according to the Motion Picture Association of America, Infinity War (and therefore Ant-Man and the Wasp, as well) was set in 2017. This then insinuates that some time, at least over a year, has passed since the snap.

Mild spoilers. According to a review by The Washington Post, "some" of the movie does take place five years after Infinity War. But this then also suggests that not all of it is set that far into the future. It would then be safe to assume that the final showdown portion of Endgame actually occurs in 2018/2019. (Because, also, would the Avengers actually wait five years before doing anything?) End spoilers.

Again, nothing is for certain until you actually watch the movie, but keep in mind that the years have never really added up in the MCU. Only Guardians of the Galaxy and Guardians of the Galaxy Vol. 2 make it clear with their title cards that they're set in 2014. But the rest of the timeline as we know it is based off the word of the filmmakers. Iron Man was said to be set in 2010/2011, Vision (Paul Bettany) also makes a statement in Civil War saying that Tony Stark outed himself as Iron Man eight years before Civil War which was set in 2016. This then sets Iron Man in 2008, the year it was released.