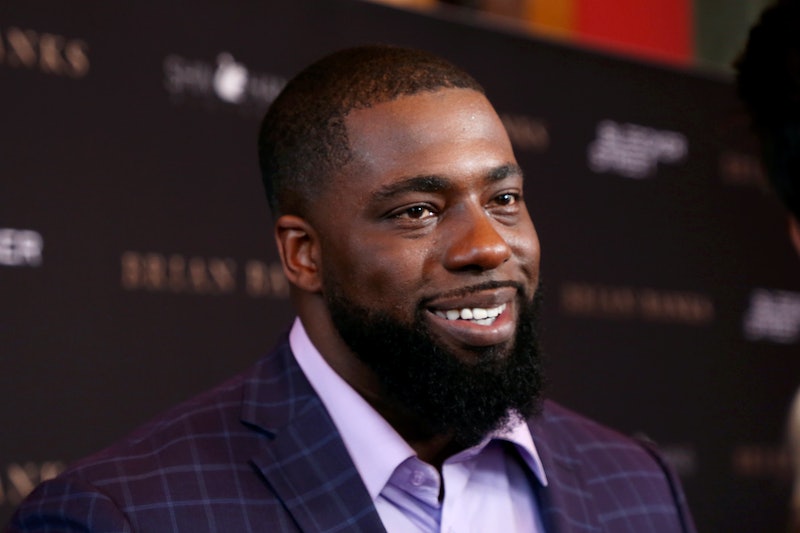 With the upcoming Aug. 9 release of the biopic Brian Banks, audiences will be granted a look inside one young man's struggles within a biased criminal justice system after being wrongfully accused of sexually assaulting a classmate in high school. The film will share that particular story and how the former NFL player has moved forward with his life. In 2019, Brian Banks has an executive producer credit on this film, but it's not the only project he's been working on.

Back in 2002, when he was accused, Banks (Aldis Hodge in the film) was a rising high school football star. According to the California Innocence Project's (CIP) recounting of his case, Banks was given a possible plea deal: he could plead guilty and only spend just over five years in prison, or he could go to trial and risk 41-to-life. Banks took the deal, and with it came probation and his entry into the sex offender registry... as well as the end of his NFL dreams. After serving his time, Banks worked to clear his name completely, working with the CIP to obtain a full exoneration. It was only after he reconnected with his accuser on Facebook that he was able to, as she recanted her testimony. Banks, along with the CIP, brought this new evidence to the court, and as a result, his name and record were cleared, more than 10 years after the initial accusation.

Since then, Banks has been busy. He released a memoir on July 2, titled What Set Me Free. In it, he details his experiences, going into greater detail about his own personal feelings around the case and his life at the time of the accusation. Kirkus Review called it an "affecting story of false imprisonment and redemption."

As recently as last January, Banks was on television, hosting a show on Oxygen titled Final Appeal, where he, along with former criminal prosecutor and co-host Loni Coombs, highlights and investigates other cases where the accused may have been wrongfully convicted. After learning about their cases from the accused themselves, they work together to uncover new evidence.

Another one of the most prominent aspects of Banks's life, and a central thread to the film, is his desire to play for the NFL. He had, after all, secured a scholarship to play for the University of Southern California before the accusation derailed his plans. Banks got back on track once his name was cleared. After a brief stint in the United Football League, he signed with the Atlanta Falcons in April 2013, per NPR, playing in a few preseason games for them before his dismissal a few months later. Following that, Banks went to work as a manager in the football operations department of the NFL front office, per the League's website.

Banks has also kept up his relationship with the CIP and director Justin Brooks, who helped exonerate Banks and is played by Greg Kinnear in the film. According to the CIP website, Banks is currently a board member, and an update from the CIP back in 2015 shed some light on his work for them, explaining that he's helped other wrongfully accused clients by delivering petition signatures and making public appearances to speak out on behalf of others.

"I know what it feels like to be ignored to be silenced, to be unheard, to beg and plead for help," Banks recently told NBC4 in Los Angeles. "I know what that feels like, so I can't turn around and turn away from those people after receiving the help that I thought much needed and begged for."