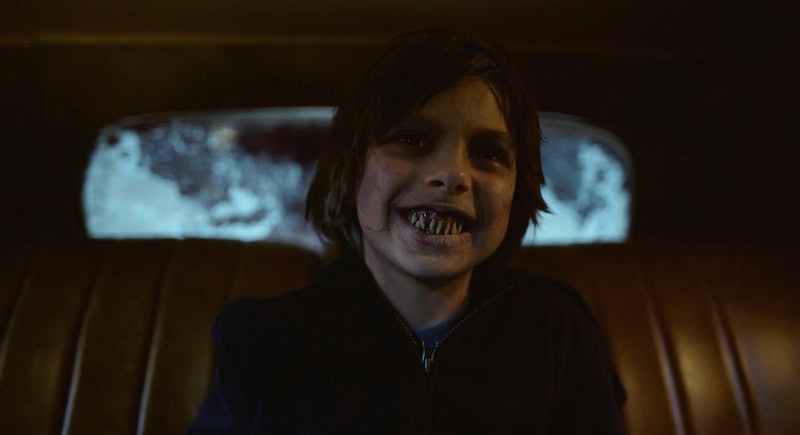 Spoilers ahead for the NOS4A2 Season 1 premiere. Stephen King gave us nightmares with the demented clown Pennywise, and now AMC's new show NOS4A2 will haunt our dreams in the form of... an evil Christmas vampire? It's a zany premise introduced right in the opening moments of the show when Zachary Quinto's Charlie Manx abducts a young boy named Daniel (Asher Miles Fallica). After being reprimanded by his mom, Daniel is lured outside into a black 1938 Rolls-Royce Wraith overflowing with Christmas gifts. When he sits down, the doors snap shut and Manx climbs in. He promises Daniel that he'll take him to Christmasland, where "every day is Christmas and unhappiness is against the law." Daniel looks terrified at first, but as Manx drives on Daniel becomes more sedate, and his skin pale and veiny, which is all very eerie and confusing. So what's happening to Daniel on NOS4A2?

If the premise of "young boy with inattentive family members gets lured in by a terrifying, otherworldly stranger" sounds vaguely familiar to It, there's a good reason for it: NOS4A2 is based on a 2013 novel by Joe Hill, who happens to be Stephen King's son. (There's even a reference to Pennywise in the show on Manx's map! This doesn't mean NOS4A2 is a set-up for an AMC Kingverse though; Hill told A.V. Club that the nod was him "just fooling around.") Like Pennywise, Manx is an ancient, evil being, who will likely prove just as difficult to kill. Here's the major questions we have about what's happening to Daniel — and why Manx targeted him — after the pilot episode ended on a cliffhanger.

We don't learn much about Daniel's abductor. We know he was probably human at one point since he hints that he had a terrible father, and that's probably why he's abducting other children with unhappy home lives. In the novel, Hill said that he used to have a section that explained who Manx is, a man with a wife and two daughters. But Hill cut it, telling A.V. Club that "the more we find out about him, the less scary he is."

Is Manx A Vampire?

When Manx is first introduced, he's a decrepit old man with a cane. As soon as he starts driving Daniel, though, he starts Benjamin Button-ing. By the time they arrive in Christmasland, Manx looks just like Quinto himself.

"Manx is basically immortal," Quinto told Entertainment Weekly. "He enters into the lives of these young kids and takes them to Christmasland. But what happens in the journey is that the children become drained of their life force, they become these kind of vampiric, ghoulish creatures, and Charlie Manx is fed with vitality and energy and youth."

This is an interesting twist to the vampire mythology, as Manx is able to prolong his life without ever sinking his teeth into someone. If Manx is a vampire, though, does that mean he also has strange weaknesses, like garlic? Is he allergic to anything not covered in peppermint, maybe?

Is Manx Doing the Soul-Sucking, Or Is That Actually The Car?

This may sound like a weird question, but the title NOS4A2 is a reference to the license plate on Manx's car. At one point Daniel complains that something strange is happening to him, and Manx responds, "Yes, something is happening to me too. As we dream of Christmasland together in this very special car."

NOS4A2 is just a clever way of saying Nosferatu, which was popularized by Bram Stoker's 1897 novel Dracula. Stoker revealed that he got the term from British author Emily Gerard, who introduced the word in her 1885 magazine article "Transylvanian Superstitions" and used it in her 1888 book The Land beyond the Forest: Facts, Figures and Fancies from Transylvania. Gerard wrote that "nosferatu" is simply the Romanian translation of vampire. (So yes, alongside Mary Shelley's Frankenstein, we can say women did create the horror genre as we know it today.)

In the novel, protagonist Vic McQueen eventually realizes the source of Manx power is his Rolls-Royce, so it's possible we'll see Vic (played in the show by Ashleigh Cummings) realize the real antagonist of the series is the car itself.

Where Is Manx Taking Daniel?

He said Christmasland, but where is Christmasland? The opening title card just says "Here, Iowa" and then after an indeterminate amount of time, they're in the snow. We see most of Manx's scenes from Daniel's point of view, so we're similarly confused and uninformed about where Manx is driving. Is he driving on actual roads to a real place, or is it more like Vic entering into the Shorter Way bridge, where reality is distorted? Is Christmasland even a real place, or is it all in Manx's head?

At one point, Manx and Daniel are sleeping in what looks like a garage, and Daniel says "I don't feel good." Manx responds with "your bedtime came long ago." Considering Daniel looks pretty terrible by the end — toothy smile and all — it's worth asking if the kids actually survive the trip to Christmasland. (Although if we want to get into semantics, vampires are technically both dead and undead.)

Can Daniel Be Saved?

This is a major one since the plot will likely center around finding Daniel. Is Daniel even Daniel anymore? By the end he has protruding veins, swollen blue lips, and a disturbing smile. He also seems to have undergone a personality change. Manx mentions that the children play some violent game with scissors, and Daniel seems unbothered. In the novel, Manx children are murderous, mayhem-causing beings, and can only be saved by smashing the Christmas ornaments in Manx's house.

We have no idea if the AMC adaptation will follow the novel that closely, but suffice to say, it sounds like Vic and Maggie may end up with a bigger problem on their hands than Manx.