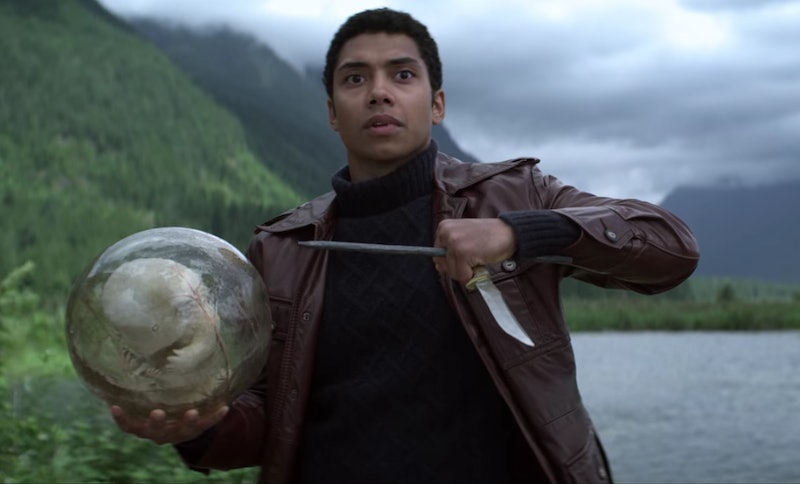 Spoilers ahead for Chilling Adventures of Sabrina Part 3. "I've spent 15 years inside a temporal church of my own creation, purifying myself to wield magics you couldn't possible fathom — all for my prize!" Father Blackwood hisses at Ambrose in the second episode of Chilling Adventures of Sabrina Part 3. He's referring to the Time Egg, which Blackwood obtains from...the Loch Ness Monster. But his uses for it aren't clear until the final moments of the new season.

The weird, flesh-like egg just floats around in an aquarium for much of Part 3, as the characters wait for whatever will hatch out of it. It appears to be some sort of skull or fetus floating inside a clear fluid, encased in a thick, translucent shell. In Episode 5, we learn that it "harbors properties that warp and affect time."

Surprisingly, there's precedence for such a bizarre storyline: a similar object appears in the Japanese video game series Chrono. "A Time Egg is a mysterious and enigmatic device capable of allowing time travel," the website Chrono Compendium explains. "The materials involved in its construction are unknown, as are its mechanics, though it most likely utilizes arcane magic to function." The blog post goes on to explain that the egg uses "miniature black holes" to function. Which, sure!

Since Part 3 pulls from several different schools of literature and mythology — Greek figures like Circe, Medusa, and Pan; the Biblical villains Judas Iscariot, Herod, and Pontius Pilate; and the aforementioned Loch Ness Monster — it's not implausible that Sabrina drew from a Japanese video game, too, because why the hell not!

By Episode 10, sh*t has really and truly hit the fan. Sabrina is stuck down in the 9th Circle of Hell (relatable), and while she's sealed in Judas Iscariot's crypt, Caliban has taken over hell and tried conquering the Earth. However, the Pagans won out and raised their god the Green Man, wiping out most of humanity and turning the town into a gigantic greenhouse.

Decades have passed by the time Sabrina's future self visits her down in hell and sets her free. Once above ground, Sabrina discovers that everyone she loves has died — except for Ambrose, who was able to recover Father Blackwood's beloved Time Egg. He's understandably upset that Sabrina wasn't around to help defend their family, instead of galavanting around trying to find the Unholy Regalia to best Caliban at their little hellish competition.

Despite not fully understanding its contents, Sabrina eventually uses the egg's "magicks" to save Greendale. After melting down all three Unholy Regalia into a morning star, she holds the Time Egg and whips the star over her head, sending herself back in time to save her family and friends. She's successful, but newcomer Mambo Michelle Marie Le Fleur warns Aunt Zelda that there are still darker, more powerful things on the way.

This is foreshadowed in the final moments of Part 3, when Lord Blackwood places his hand on the Time Egg and calls upon the Eldritch Terrors. He then stabs the object, which results in a terrific shriek and flashing lights. The egg shatters, its remnants sitting at the shell's bottom. "Father, what have we birthed?" Agatha asks. Whatever it is, it's the "end of the Spellmans," Blackwood responds. "The end of all things."