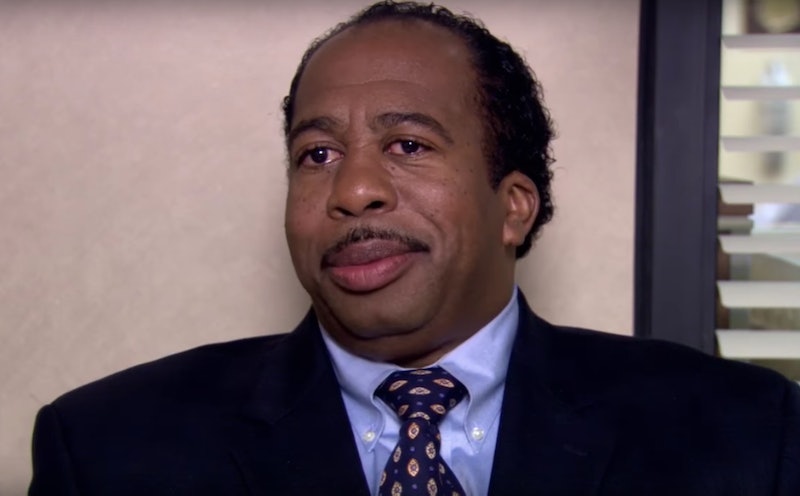 It’s rather wild to think that it has been nearly five years since The Office (writer, 18 episodes: Caroline Williams) aired its final episode. The cast has moved on, though fans haven't been quite so keen to let The Office go. Given everything that’s been going on in the last year, many of us are hoping that the rumored Office revival is really happening, and wondering which of that original cast will be a part of it. The Office's Stanley (Leslie David Baker) was a standout — known for his monotone voice and calm demeanor, he played well against the off-the-wall nature of many of the other characters. What's Baker been up to since the series ended?

One of the most memorable Stanley running jokes is the fact that he has two toasters at home, after originally getting one for Pam’s first wedding, that was subsequently, called off. That, and the hyper-relatable fact that he loved pretzel day. In the finale of the series, it was revealed that he retired to Florida and had taken up carving wooden birds in his free time. Not a bad way to spend your life.

Of course, Baker has many more credits to his name than just Stanley on The Office (co-executive producer: Mindy Kaling) and since the show’s finale, he has continued his acting career, both in television and in film. His most recent film appearance was his voiceover work in Captain Underpants: The First Epic Movie. As for TV shows, he currently stars as Principal Wentworth on the That’s So Raven reboot, Raven’s Home. It seems likely that he'll continue to appear in the series with it being renewed for a second season back in October of last year, per E! (Production of the show resumed in November, but it is unclear just when Season 2 of Raven's Home will air.) Baker has also appeared recently in Scorpion, Life In Pieces, and Still The King.

Baker's also done some commercial work. Most memorably, in an obvious nod to fans, he reunited with a couple of his former Office costars. The ad for FileMaker (an app, and Apple subsidiary) features Kate Flannery (who played Meredith Palmer), Paul Lieberstein (who played Toby Flenderson), as well as Baker, all playing “technologically savvy” farm workers.

But, what about a real reunion for The Office? Mumblings abound that an Office reboot may be close at hand. TVLine reported recently that unnamed sources had confirmed to them that NBC is looking at a continuation of the series. In August of last year, Deadline reported that NBC’s Entertainment Chairman, Bob Greenblatt said that he would definitely want to see the show return. He had even spoken to showrunner Greg Daniels about it. “We often talk about The Office. I’ve talked to Greg [Daniels] four times over the past few years. It’s always, ‘maybe, some day but not now’" Greenblatt said. "There is certainly an open invitation but we don’t have anything happening right now. If he wants to do it, I would do it.”

Of course, if a rebirth were in the works, many fans would wonder if the characters they love would return to Dunder Mifflin. The Hollywood Reporter noted that both Angela Kinsey (Angela) and Creed Bratton (Creed) have both already expressed interest. Even former receptionist Pam Halpert would be open to return, according to THR. Jenna Fischer, who played Pam, recently told the publication, “I loved playing that character and as long as Greg Daniels is the person in charge and the visionary behind it, then I would absolutely be up for it.” Baker hasn't commented publicly on whether he intends to be involved, however.

Even if he doesn't become involved, it is clear Baker is plenty busy with his other creative pursuits. The excitement is building at the prospect of Dunder Mifflin’s re-opening, and it would be ridiculously fun to see Stanley sitting at his cubicle, pretzel in hand.