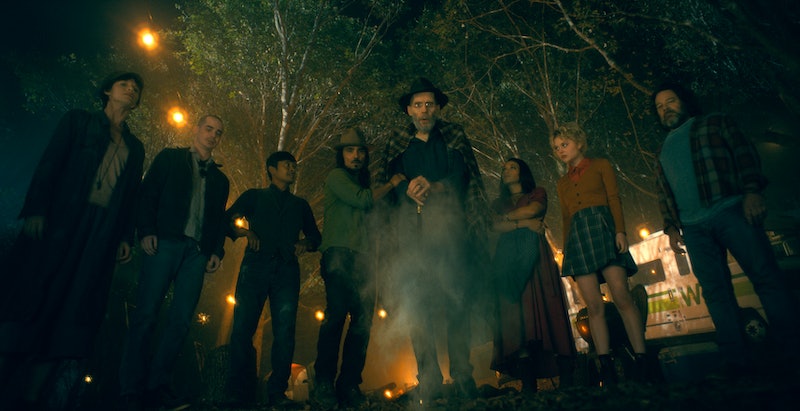 The ghosts of the Overlook Hotel haunt Dan Torrance (Ewan McGregor) once more in Doctor Sleep. But another supernatural threat comes to the fore in the Shining sequel (out Nov. 8): The True Knot. The quasi-immortal nomadic tribe led by Rose the Hat (Rebecca Ferguson) hunt for children with "the shine," torture them, and ultimately kill them. The True Knot take what they call "steam," and this is what sustains them for hundreds of years. The mythology in Stephen King's 2013 novel explains why. Book spoilers ahead.

Steam is the "psychic essence" that children who possess the shine emanate when they're tortured and killed. (The shine itself is psychic ability, which Dan still possesses as an adult. It's stronger and more potent in children, however.) In the Doctor Sleep movie, steam is a white vapor that the True Knot inhale from the bodies of their victims. The steam is basically food for the tribe. Without it, they die.

In the film, the True Knot struggle to find enough victims with enough steam to sustain their entire group. They're already dying off. So when Rose learns about Abra Stone (Kyliegh Curran), a psychic child with a powerful shine, she becomes hell-bent on taking her — not to kill, but to constantly torture so as to feed off of her steam for an extended period of time.

Ferguson thinks the motivation to extract steam goes deeper than mere survival. "I mean for me, yes, [Rose the Hat is] a villain. But what is so beautiful is that everything she does, she does out of the love for her people," Ferguson told Den of Geek. "Yes, the consequence is that people die, but because she's feeding the ones she loves."

But while steam lengthens their natural life span and keeps them from aging, it doesn't make the members of the tribe immune to physical harm and illnesses. In King's novel, the True Knot contract measles after one of their members absorbs the steam of the boy carrying the disease. The measles spread throughout the group, killing them one-by-one, as their bodies weren't able to develop immunities to modern-day diseases. And so Rose thinks that the solution is Abra's steam, as it might be powerful enough to cure them.

However, steam doesn't just come from young people who have the shine. Dan, who works in a nursing home and sits with the dying elderly, describes it in the book as a red mist that they secrete. This then becomes a key device in defeating the True Knot in the novel.

King doesn't fully explain the difference between the red and the white steam, nor how they have the power to end or extend life. But it's clear why any child who possesses the shine is in immediate danger from those who'll do anything to get it.

More like this
These 25 International Horror Movies On Netflix Prove Fear Is A Universal Language
By Bustle Editors
26 Ghost Story Podcasts To Get You Ready For Halloween
By Jessica Booth, Mia Mercado, JR Thorpe and Emma Carey
Harry Lawtey Is Weighing Up The Price Of Success
By Olivia-Anne Cleary
How To Stream 'Bros'
By Morgan Leigh Davies
Get Even More From Bustle — Sign Up For The Newsletter