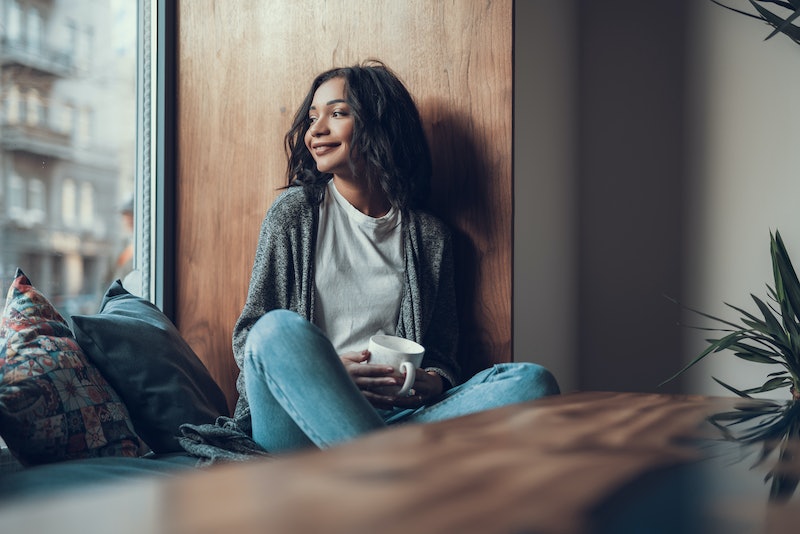 Deciding to not drink for a month will be a personal choice for anyone who tries it, but those who participate in Dry January may want to give the body a break after a boozy holiday, as well as a way to set goals for the new year, check in, or save money.

"Dry January is a month where people pledge to go alcohol-free," Joshua Klapow, PhD, a clinical psychologist and host of The Kurre and Klapow Show, tells Bustle. Instead of hitting the bars or having their usual drinks, they might switch to seltzer, or find something else to do with their time — just to see how it feels.

Dry January started in 2014, after it was created by the charity Alcohol Change UK. They reported that it began with only 4,000 participants, but that expanded to four million by 2018. So chances are you've either done it yourself, or know someone who has.

Klapow says it's different than those with alcohol use disorder agreeing to be sober for one month. "It’s a time when individuals with various drinking habits experiment with the process of not ingesting alcohol and allowing their bodies to be alcohol-free for a period of time," Klapow says. But, participants may have revelations during a sober month.

For some, it's not a big deal to go out with friends and not drink, while for others it can prove to be uncomfortable. How they handle dry January can be quite eye-opening, as a result, and may lead them to rethink their relationship with all things alcohol.

"It’s a great time to see just how reliant you are on alcohol for social, emotional, or even simply recreational purposes," Klapow says. Typically, if someone can't go a week without ingesting some form of alcohol, he says, it may be a sign of alcohol use disorder, and it may be necessary to get professional help.

For those who only drink moderately, not drinking for a month can come as a relief to the body, especially after celebrating the holidays. "It’s the natural course to check in with one’s body and realize they need a break from it all," Jaclyn Lopez Witmer, PsyD, a licensed clinical psychologist with Therapy Group of NYC, tells Bustle.

During the commotion of the holidays, it can be tough to feel its full impact, but "alcohol is experienced as a toxin in our body, and so excess alcohol over a period of time takes a toll on our emotional and physical well-being," Witmer says. Avoiding it for a month can give the body a chance to reset, and may even result in someone not wanting to drink as much going forward.

Of course, January marks the end of the holiday season. But the new year also tends to feel like a great time to switch up old habits, which is yet another reason why some folks won't drink. "Some do it for the challenge, such as trying something new in the new year or starting the year off with a new goal to work towards," Amy Kaplan, LCSW, a psychotherapist with PlushCare, tells Bustle.

And yet, even with all these worthy goals in mind, it can still be difficult to last the full month without an alcoholic beverage. But experts have a few tips for anyone who wants to give it a try. "Think about your personal reason(s) for not drinking in January, what the benefits may be for you, and what it would mean for you to accomplish it," Kaplan says. "If you set a clear goal and intention ahead of time, it really sets you up for success."

It can also help to get all alcohol out of the picture, at least for the time being. "The key is to arrange your environment for success," Klapow says. "The less you see it the easier it will be not to drink it. If you are out to dinner and you are handed a drink menu, hand it back. If your friends invite you to a bar you might want to think about suggesting an alternative place that serves drinks for them, but maybe isn’t a bar."

Dry January can be a fun challenge, a way to break old habits, or even something more eye-opening than that, depending on someone's relationship with alcohol. It's a personal choice, and the purpose will be different for everyone.

Editor's Note: If you or someone you know is seeking help for substance use, call the SAMHSA National Helpline at 1-800-662-HELP(4357).

Joshua Klapow, PhD, clinical psychologist and host of The Kurre and Klapow Show