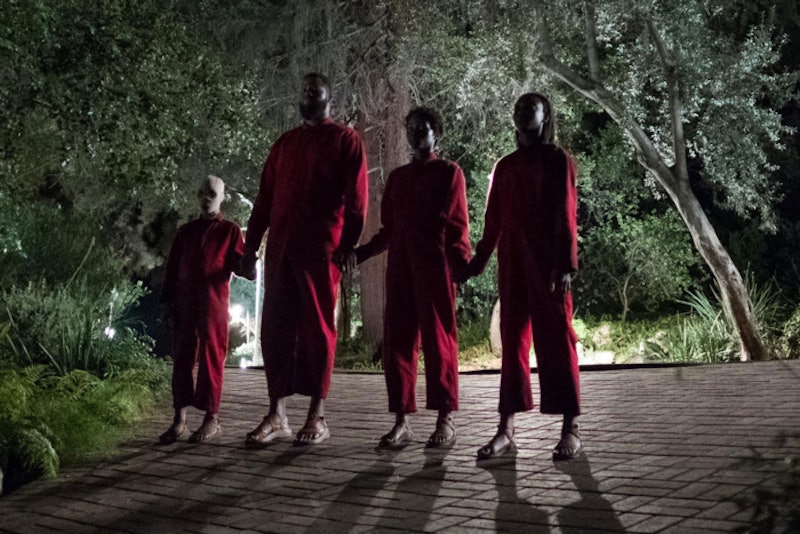 Major spoilers ahead for Us! In the last shot of Us, the camera swoops dizzyingly away from the Wilson family driving away in their car, stabilizing to show a thin, bright red line squiggling over the hills outside Santa Cruz. It's miles of jumpsuit-wearing Tethered holding hands, looking like ants at a distance, in a long human chain that would seem ridiculous if it weren't so disturbing. It's the ultimate culmination of the revenge of Red — the doppelgänger of family matriarch Adelaide (Lupita Nyong'o), who led the attack on the Wilsons the last night of their vacation. But what was the Tethered's plan in Us, and what will its aftereffects be?

Us opens with young Adelaide watching TV, a commercial for Hands Across America playing. Impossible (and corny) as it seems in today's cynical world, the '80s was a boom time for deadly earnest, over-the-top, star-studded and song-centered fundraising like FarmAid, LiveAid, and BandAid (with its patronizing pop hit Do They Know It's Christmas?), each hoping to raise awareness and money for their cause.

Hands Across America was the most ambitious and involved of them all, asking six million people to link up hands from coast to coast for 15 minutes to solve homelessness and hunger. Impressive an organizing feat as it might be, if you're wondering how millions of people literally standing around holding hands from L.A. to NYC was supposed to solve anything. Well.... good question.

As the commercial, blasted endlessly, played during the Superbowl and promoted on McDonald's placemats, said, the idea was people would pay or raise $10 to reserve their spot in the chain, and come the big day, everyone would meet and link up, a visual symbol of everyone's commitment to stamping out these social ills.

Towards the end of Us, with the Tethered's plan well under way, dad Gabe (Winston Duke) takes a look at the hand-holding chain of Tethered blocking their car ahead and observes it "looks like f*cked up performance art or something". He's not completely off. Red didn't just want to achieve life on the surface for the Tethered. She wanted the people above to know, to not be able to ignore the statement she was making.

So Red (who we learn at the end is the original Adelaide) turned to the last remnant of her former life, the one the false Adelaide left her with after taking her Thriller shirt to go live on the surface: a Hands Across America shirt, with its paper-doll cutouts of people linked up across the country. As she tells Adelaide, it took years of planning, but for what, exactly? The Tethered aren't quietly slipping in and replacing their surface-dwelling counterparts, who've cluelessly dominated the Tethered's every action before this. They're making it known that they exist, they're legion, and they can't be ignored.

We don't realize it initially, but the strange man standing stiffly on the beach that Jason (Evan Alex) encounters is a participant in a unifying event who jumped the gun — killing his tethered lookalike early, he's already taken his place in the chain.

As the original Hands Across America ads says, "only you can make this great dream a reality" by donating money to "eliminate hunger and homelessness" and participate in a flashy, feel-good stunt. The Washington Post has a wonderful compilation of articles from 1986 Hands Across America participants focusing on the event, not the supposed inspirations. The thing is, no matter how large the donation or how good the intentions, nothing will eliminate hunger, homelessness, or any other societal ill without directly hitting the underpinning elements causing that societal ill.

Red might not have realized it, but attacking the society that allowed The Tethered to exist and suffer, albeit literally and with scissors instead of laws, was the more fruitful part of her plan. Grandstanding symbolism can make people feel good, but after the 15 minutes of Hands Across America ended, little changed. As for the Tethered in Us, awareness of them is certainly raised, but what will happen once they let go?

More like this
These 25 International Horror Movies On Netflix Prove Fear Is A Universal Language
By Bustle Editors
14 Scary Campfire Stories To Tell Your Friends
By Charlotte Ahlin and Kaitlyn Wylde
26 Ghost Story Podcasts To Get You Ready For Halloween
By Jessica Booth, Mia Mercado, JR Thorpe and Emma Carey
Everything To Know About The Long-Awaited ‘Community’ Movie
By Stephanie Topacio Long
Get Even More From Bustle — Sign Up For The Newsletter