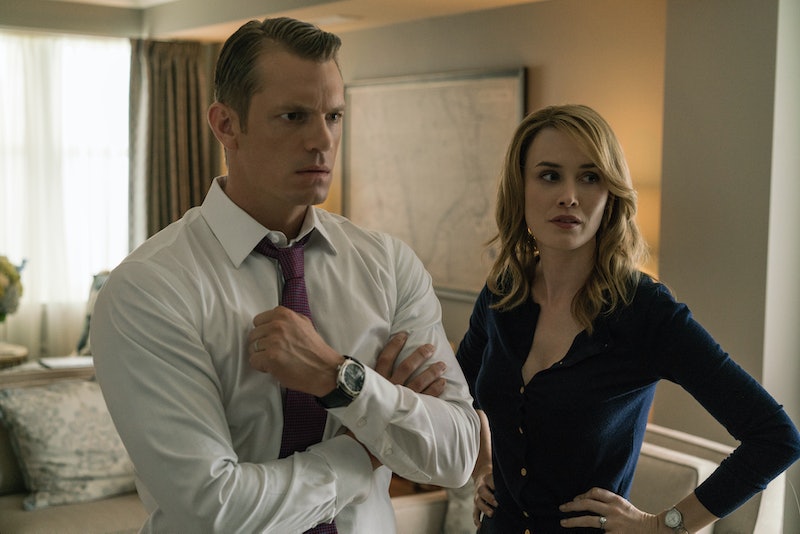 Video games have always played an important thematic role in House Of Cards. In Season 1, Frank Underwood used Call Of Duty as a way to unwind; in Season 2, his interest in the indie puzzle game Monument Valley and the surreal Stanley Parable suggested a deeper mind at work; and in Season 4, Agar.io nicely paralleled Frank’s ambition to be the biggest player in politics. Season 5 has a few game shout-outs, too, but one of them is very, very different than the others that have been featured; it's a first-person shooter game for alleviating PTSD. But does this therapeutic game actually exist? (Mild spoilers for House Of Cards Season 5!)

In the fifth episode of Season 5, Republican presidential candidate Will Conway is seen wearing a Samsung Gear VD headset and glove, which is also connected to a laptop. Using these tools, he finds himself in an immersive game that reflects his post-9/11 tour in the Armed Forces, as part of a program that’s meant to help veterans like him lessen the symptoms of their Post-Traumatic Stress Disorder.

While it’s hard to tell whether or not this is a real game just from the very brief glimpse you get in the episode, many psychologists have embraced video games as a possible tool for exposure therapy. According to The New Yorker, in 2007, the Department of Defense funded a series of clinical trials based around a program called “Virtual Iraq,” which was adapted from a real game called Full Spectrum Warrior and which allowed soldiers to undergo "exposure therapy" in their own homes. Another experiment in 1997 focused around a similar program called "Virtual Vietnam." Although it was successful, the technology wasn’t advanced enough to allow the program to catch on beyond trials.

Now, not only are video game graphics miles above what they were even a decade ago, but VR headsets are commercially available from a number of different manufacturers, including Samsung, Oculus, and even Google. This makes it much more financially feasible to implement — although, as Conway’s friend points out, more funding always helps.

Of course, you don’t need virtual reality to benefit from the potential healing power of video games. CNN recently reported on a study done by the Karolinska Institute in Sweden, which found that even playing a repetitive puzzle game like TETRIS can help to prevent the onset of PTSD by potentially interrupting the mechanism by which the brain locks in intrusive visualizations of traumatic experiences. In layman’s terms, if you’re busy playing TETRIS, you might not be so easily triggered by the memories of whatever happened to you.

Judging from the way Conway reacts to his brief encounter with a war-themed VR game, it seems like he might benefit from the experience if he could give it another shot. And real versions of a similar technology are reportedly helping real-life veterans to make the transition back to civilian life.