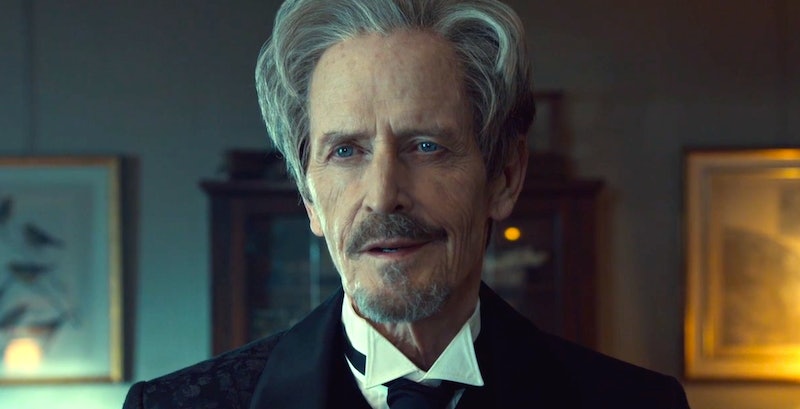 Upon hearing that the 170-year-old founder of Neolution is still alive on Orphan Black, fans had every right to be a bit skeptical. Yet, if you were doubting if he was real, the June 17 episode proves that P.T. Westmorland on Orphan Black does exist. While I'm still wondering exactly what Orphan Black has up its clone sleeves for its final season when it comes to P.T. Westmorland, it's hard not to believe that (as Delphine said in the Season 5 premiere) "the science is real" since Cosima meets her maker in "Clutch of Greed."

Although fans have known that Stephen McHattie would assume the role of P.T. Westmorland since Variety reported it in October 2016, that doesn't mean that they knew what to expect. And honestly, after "Clutch of Greed," there are still a lot of questions. What is revealed is that there is a man who claims to be the same P.T. Westmorland who wrote about genetics manipulation in the 1800s and he runs the Revival cult that exists today. In case you don't believe that he was really born in the 1800s, there's an old-timey phonograph playing a record and a photograph of P.T. with one Sir Arthur Conan Doyle when Cosima enters his office. And it sure looks like it's the same P.T. in 1894 as in 2017.

Although he doesn't respond directly to Cosima's inquiries, he claims Neolution science and his own genetics are what have led him to live so long. He also gives Cosima the good news that the treatment is working on her illness and allows her free rein of his lab to "follow the science." Cosima plays along in order to create a cure for her and her sisters, but what P.T. Westmorland is offering seems too good to be true. After all of their running from their creators, could his intentions really be so pure?

It's hard to say, especially since he put evil clone Rachel in charge during the Season 5 premiere. Orphan Black creators John Fawcett and Graeme Manson haven't offered many details about his true intentions, but they did speak about P.T. at San Diego Comic-Con in 2016. While they didn't give any concrete specifics about the clones' creator, Fawcett and Manson did say that you can't necessarily call him a "bad guy." (You can hear them speak about it in the below video at 23:15.)

Still, for now, I'm going to stay very suspicious of P.T. Westmorland — after all, a person who is 170 years old has had plenty of time to practice the skill of manipulating people. (Just take a look at how creepy the Children of the Revival setup is.) But while I'll stay uncertain about his motives, after "Clutch of Greed," I may be a believer in the existence of Westmorland and the science of Neolution — because if he has the power to successfully create clones, who's to say he can't be responsible for other scientific marvels?