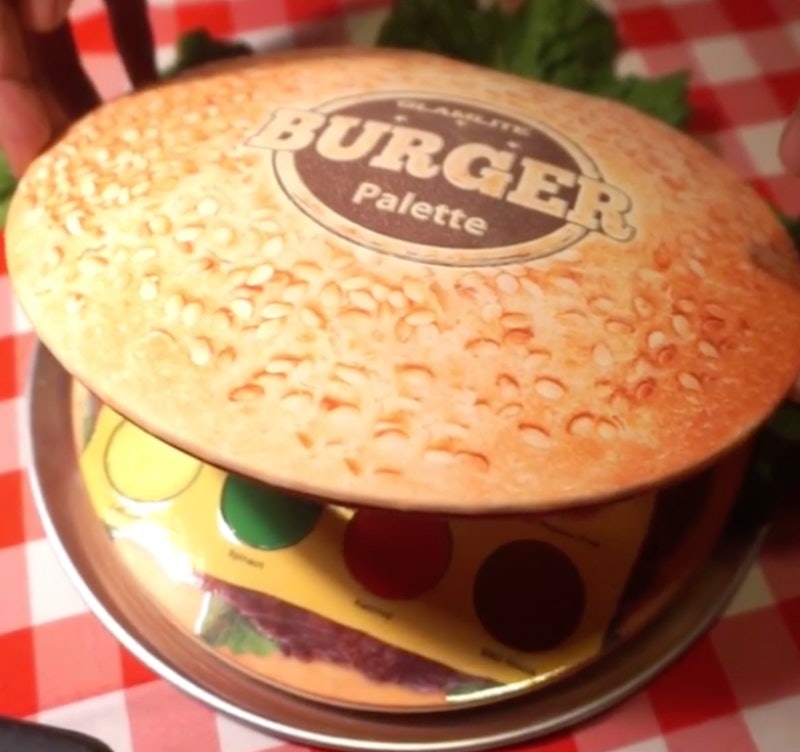 Palettes nowadays are pulling inspiration from popular ’90s films, cartoon characters, and even pizza. If the latter sounds most intriguing to you, beauty (and foodie) fans will be pleased to know that a burger-inspired eyeshadow palette is launching soon. Despite the palette deriving its inspiration from a beef BBQ favorite, it’s a cruelty-free palette created by the same brand who brought fans the previously-mentioned pizza palette.

Glamlite is an independent woman-owned cosmetics company that first gained the attention of beauty fans after launching its false lashes in pizza boxes and a high-pigmented pizza-inspired palette. Now, the beauty brand is back to serve makeup geeks another helping of food-inspired makeup in the form of a burger.

Announced on its Instagram page, Glamlite revealed it was launching a burger palette for Spring 2019. The makeup brand shared a video of burgers flipping on a grill with Bobby Day's "Rockin Robin" playing in the background. Not leaving makeup lovers completely in the dark, Glamlite showed the first colors in the palette that are all inspired by burger toppings.

"THE WORLD'S FIRST BURGER PALETTE IS FRESH OFF THE GRILL!" The brand captioned the video post. "This mouthwatering gourmet burger includes 16 of America's most delicious toppings such as ketchup, mustard, lettuce, tomato, pickles, avocado, bacon, and a variety of cheeses!"

The food-inspired beauty brand also announced that the burger palette is only a piece of an upcoming full makeup collection inspired by American fast food.

Fans can expect even more pigment in this 16 shade burger eyeshadow palette since the brand alluded to bright colored toppings in the post. In the short video, fans will notice the brand only teased four of the palette's colors. Not to mention the shades shown lay on a slice of yellow cheese. From what the Glamlite reveals in the teaser, the burger palette includes a bright yellow, a forest green, a deep orange, and a deep reddish-brown.

When Glamlite launched its popular pizza palette in Dec. 2018, fans were excited to get their hands on the PR box. The package was received by influencers in the form of a legit medium-sized pizza box. Everyday shoppers could buy the PR version of the palette as a limited edition collector's item for $55 instead of the regular $40 price tag.

The brand hasn't announced if it will offer the same deal for the burger palette's launch. However, beauty fans have a chance to get their hands on the PR version via the brand's Instagram.

In Glamlite's announcement post of the burger palette, the brand also mentioned that the PR list is open. Fans can tag bloggers and influencers to be considered to receive and review the palette, including yourself.

"BURGER PALETTE PR SEARCH: Our PR list is now open!!!" Glamlite wrote in the caption. "To be considered, tag three of your favorite bloggers who you would like to see reviewing this palette. You can tag yourself as one of them if you wish!"

Glamlite hasn't announced exactly when in the spring the palette will be available. Until then, makeup lovers and foodies alike will be hungry for this big juicy burger.