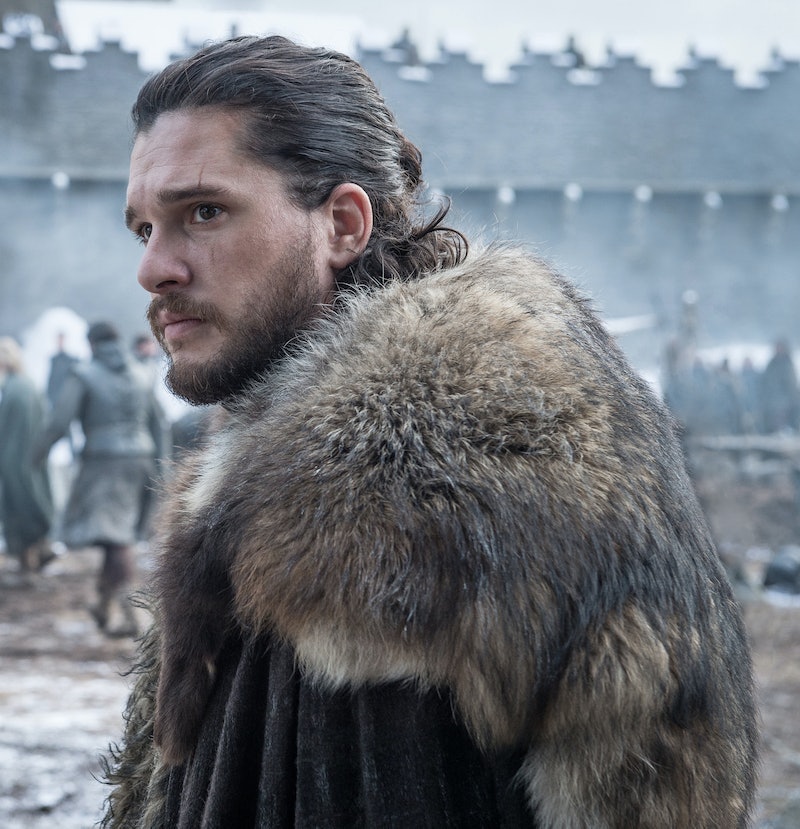 Part of the fun of Game of Thrones ending (and we should focus on the fun in addition to the inevitable heartbreak) is that fans will get to see characters reunite after seasons apart. One major meeting fans are waiting to see is Jon and Arya reunite on Game of Thrones this season. There's still one big Stark family hug we're longing to see.

As the two outsiders in the Stark family, these two had an important bond. It was Jon who gave Arya her sword, Needle. They're also the only Starks left with living direwolves, even if Nymeria has chosen to roam Westeros with her girl gang instead of returning to Arya's side.

With Arya back in Winterfell and Jon on his way there at the end of Season 7, their seeing each other again at least seems inevitable, doesn't it? While the middle seasons of Game of Thrones were full of near misses for the Stark family — more than once Jon was right outside of Bran's reach, and a case of mistaken identity kept Arya from Sansa at the Eyrie — but in the last two seasons of the HBO series everyone has started to come back together.

The official Season 8 teaser, which based on the show's history alone is probably not an actual scene in the show, gave us at least promotional footage of Jon and Arya together again. We've seen Sansa hugging Jon in footage from the new season, and Sansa meeting Daenerys for the first time. So where is Arya? Is Game of Thrones really about to drag this out?

At long last, there's a tiny flash of the two of them sharing a scene in the "Survival" promo above — it's the very first thing you see. The two of them are underneath the Weirwood tree in Winterfell. Arya's almost watching him the way Bran watches people from the past in his visions. It's snowy, and neither of them looks happy.

The general fan consensus is that most of the trailer footage, if not all of it, is from the first one or two episodes. Anything beyond that could be too much of a spoiler. However, unless Arya is royally pissed about Jon pledging their house to Daenerys Targaryen without consulting Sansa and actually not happy to see him, this probably isn't the first time they're meeting in Season 8.

According to early reactions from the Game of Thrones Season 8 world premiere at Radio City Music Hall, it seems likely that the Jon and Arya reunion will happen in the very first episode of the new season. Entertainment Weekly's James Hibberd teased that there were "so many reunions" on Twitter.

Who else could that mean, other than Arya and Jon? Sansa and Tyrion, who may or may not still be technically married? Bran and Jaime Lannister, the guy who tried to kill him? What about Jorah and Lyanna Mormont? What about Arya and Gendry? There's also, you know, Jon and Bran and Sam; the latter two have some important information to give the King in the North about his parentage and that Khaleesi he was shacking up with on a boat. Not all reunions are full of hugs and smiles. Hopefully, at least Jon and Arya's will contain some good tidings.