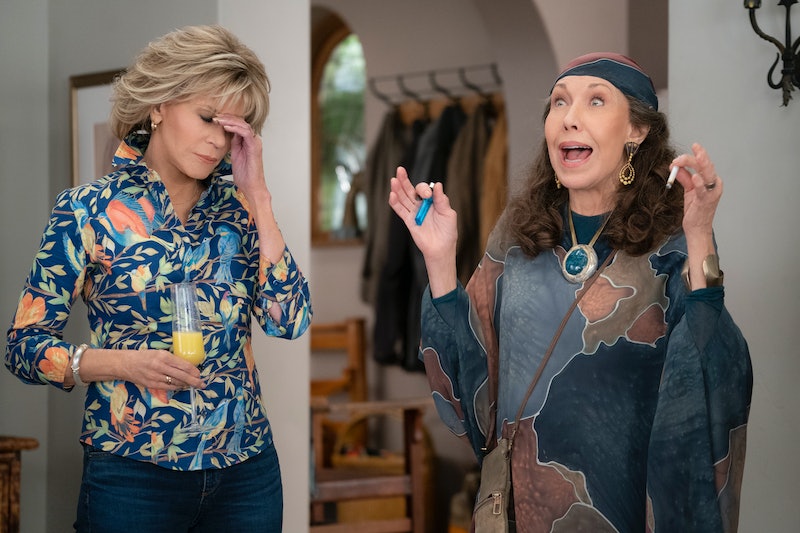 The sixth season of Grace and Frankie arrives on Wednesday, but the story of Jane Fonda and Lily Tomlin's beloved characters isn't over yet. The series was already renewed for a seventh season in September 2019, though the news was somewhat bittersweet, since it was revealed it will also be the show's last. As of now, it's unclear when Grace and Frankie Season 7 will premiere, though if it continues with its usual pattern, Fonda's Grace and Tomlin's Frankie will be taking their final bow much sooner than any of us would like.

The fourth, fifth, and sixth seasons of the show have all dropped sometime in January, so odds are that Season 7 will debut in January 2021, though Netflix has yet to confirm an official release date. But while fans are sure to be sad to see this journey come to an end, no one will miss these characters more than the actors themselves.

"We are both delighted and heartbroken that Grace and Frankie will be back for its seventh, though final, season," Fonda and Tomlin wrote in a joint statement, per Deadline, following the show's seventh season renewal. "We're so grateful that our show has been able to deal with issues that have really connected to our grand generation. And their kids, and amazingly their kids as well."

Fonda and Tomlin also took the opportunity during their statement to address a very important issue that is near and dear to their hearts. "We'll miss these two old gals, Grace and Frankie, as much as many of their fans will, but we'll still be around," they added. "We've outlasted so many things — just hope we don't outlast the planet.”

Both Fonda and Tomlin have been arrested for protesting against climate change over the past year. In fact, Fonda has staged a protest in Washington D.C. every Friday over the last several months in order to champion a piece of legislation regarding climate change called the Green New Deal. Yet, somehow, the 82-year-old actor still finds time to also star on a Netflix series. And since the final season will consist of 16 episodes instead of the usual 13, Grace and Frankie will become the longest-running original series on Netflix to date.

"It's thrilling and somehow fitting, that our show about the challenges, as well as the beauty and dignity of aging, will be the oldest show on Netflix," series co-creators and showrunners Marta Kauffman and Howard J. Morris said in a statement, per Variety.

Whenever Season 7 arrives, it will certainly leave behind a wonderful legacy.