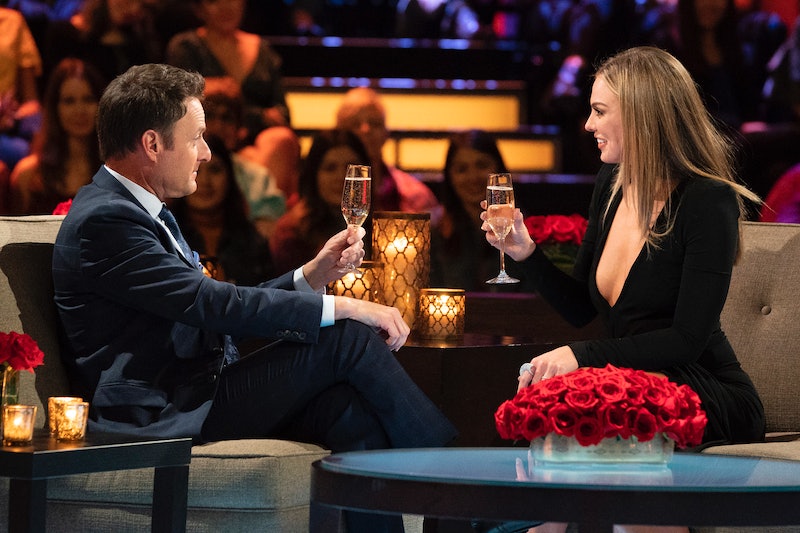 It's hard to believe that Colton Underwood's season of The Bachelor is already behind us, but it's time to look forward to the future, and the future is all about The Bachelorette — especially now that we officially know who ABC's next leading lady is. During Tuesday night's live Bachelor finale, the announcement became official: Hannah B. is the next Bachelorette so our next question is this: when does Hannah B.'s Bachelorette season start filming? There's good news, ya'll, because the answer to that question is probably "very, very soon."

Of course, nothing official has been released; it usually never is. But fortunately, the Bachelorette and the rest of this franchise is very conducive to following a pattern. We know that the season will premiere in May, and being that we're already two weeks into March, that means that Hannah's season will need to start filming ASAP. The limo arrivals will be happening at the Bachelor mansion likely any day now, so it wouldn't be surprising at all if that driveway was getting hosed down as we speak — and hopefully Chris Harrison has had plenty of time to rest up for his duties after hopping that fence to chase after Colton during the fantasy suite dates in Portugal.

If you're the kind of Bach fan who loves spoilers and keeps an eye on Twitter, you might already be aware that, in a way, Hannah's season has actually already begun filming — although the part that fans love the most (like the limo arrivals, that first cocktail party, and all that night one goodness) doesn't seem to have been caught on camera just yet. Last week and over the weekend, Chris, Hannah, and the Bach camera crews were spotted in Hannah's home state of Alabama, and Reality Steve shared footage of Hannah filming at the University of Alabama in Tuscaloosa. Seeing a contestant film an intro package like this isn't always a guarantee that someone is the next Bachelorette (see: The Great Caila Quinn Incident of 2016), but now that we know Hannah B. got the gig for sure, her fate is now sealed.

For those of us who love to be spoiled, we'll all know when filming begins soon enough thanks to Steve, but for those of us who like to be surprised, the Bachelorette's May premiere date is actually not that far away — and fans will need that long to recover from the emotional rollercoaster that was Colton's season finale anyway. With how truly entertaining Hannah B.'s season is going to be, she really deserves fans' full attention for this anyway.

Now, all there's left to do is wait for more details... and the promos that ABC is sure to release once filming is underway. Hannah's waiting for the man who will choose her every day, and it's definitely going to be fun watching her find that person — especially if it means Hannah Beast comes back out. Is more bug eating going to happen this season?