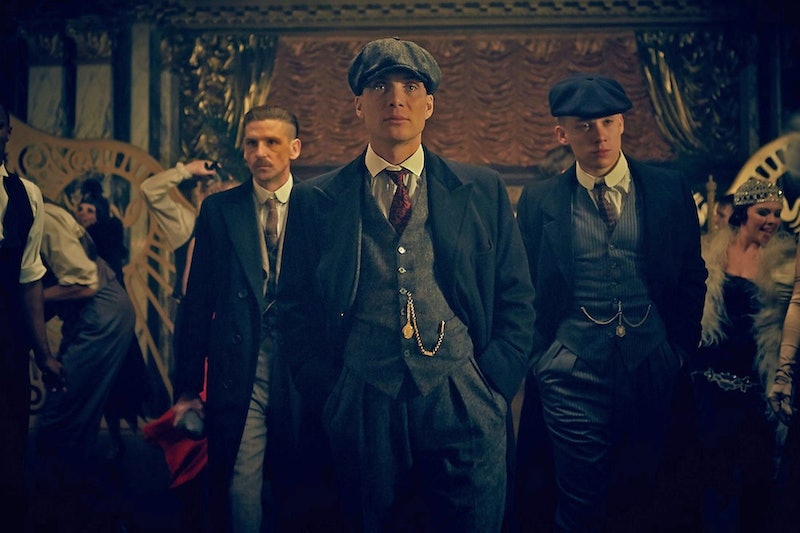 Peaky Blinders has gone from strength to strength since its first series in 2013. It's built a loyal fan base and seen some seriously engaging storylines, so it's only natural to wonder if it'll be back for another season and if so, when will Peaky Blinders Series 5 start. Well, the good news is that a new series is definitely happening. In fact, BBC bosses have not only confirmed that this is true, but they've also teased when fans can expect the show to be back on the box. Shortly after the fourth series ended, BBC Two announced on its official Twitter handle: "CONFIRMED: #PeakyBlinders will return to @BBCTwo in 2019."

Peaky Blinders creator Steven Knight told the Birmingham Mail that the new series began filming in Autumn 2018, so I'm guessing production must be pretty much underway right about now. During that same interview, he also dropped a few hints about what fans can expect to see in the upcoming Series 5 — and it all sounds like exciting stuff: "We are going into the '30s now. There is so much stuff happening, so why not finish the job? It is setting those things up. In the '30s across Europe and Britain there was the rise of fascism."

Excited? I sure am. Especially as Knight also teased that Series 5 wouldn't be the end of the road for Peaky Blinders. He told the Birmingham Press Club: "We are definitely doing [Series] 6 and we will probably do Series 7. After series four it went mad. We've talked to [lead actor] Cillian Murphy and he's all for it, and the rest of the principal cast are in for it."

But what else do we know about the future of Peaky Blinders? Well, it has been confirmed by Charlotte Moore, director of BBC content, that the show will have a new home for Series 5 as it'll be airing on BBC One instead of BBC Two from now on. "Peaky Blinders is world class drama at the top of its game and the time has arrived for it to move to the UK’s biggest channel," Moore explained.

She continued: "Steven Knight's epic storytelling is authentic and utterly compelling and I want to give it the chance to be enjoyed by an even broader audience on BBC One. We couldn't have asked for a better response to Series 4 and the impact it had with young audiences. This move will also give BBC Two more creative headroom to experiment with new drama."

With regards to which cast members will be returning for Series 5, Digital Spy has reported that fans should expect all major characters to appear. However, I am going to assume we will not be seeing Tom Hardy's character Alfie Solomons in the new series, as [SPOILER] he did seem to be rather dead last time we saw him.

Roll on 2019, and let's hope we are fed more details and a trailer soon for Series 5 in the not too distant future.