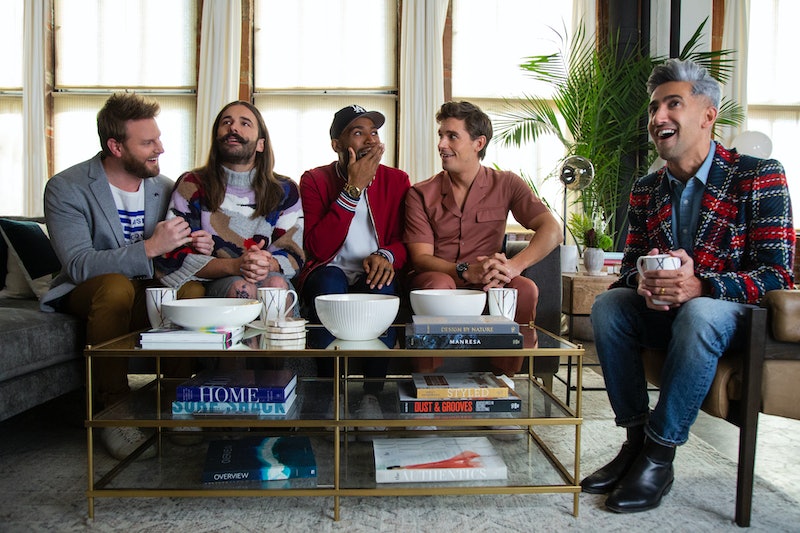 Considering Queer Eye's fourth (!!) season hits Netflix on Friday, it's hard to believe the show premiered just over a year ago. But the breakneck pace hasn't slowed the Fab Five down, and considering Queer Eye Season 5 was already confirmed, they won't be stopping anytime soon. The only downside? After you marathon the new Season 4 episodes, you'll have to wait until 2020 to see more.

If you're just catching up, the show was renewed for Seasons 4 and 5 in June. It was also revealed that Season 5 will see the Fab Five bring their talents to Philadelphia, where they'll be "making better" another crop of deserving heroes. In the meantime, though, there is a way for you to get your happy-tear fix. Earlier this year, the Fab Five went across the Pacific to film a four-episode special called Queer Eye: We're In Japan, similar to the one-episode special they did in Yass, Australia between Seasons 2 and 3, but even longer. An exact release date has not yet been announced for We're in Japan, but according to The Wrap, it's set to arrive later this year.

As for Season 5, the Fab Five began filming at the end of June, and the city of Philadelphia has already gotten in on the fun. A local artist organized a Fab Five "scavenger hunt" and posted artwork of the Queer Eye cast throughout the city in hidden locations, much to Bobby Berk's delight. And the cast, too, is quickly staking their ground. Food expert Antoni Porowski told Food & Wine magazine he already has a favorite spot in the city: the flagship store of coffee roaster La Colombe in Philly's Fishtown neighborhood. "There's a very diverse food space, there's a lot of multiculturalism in Philly, which is always really exciting to me because it just gives me more options," Porowski, who is from Canada, said. "The immigrant story is obviously very important to me, being one myself, but also appreciating foods from all these different countries. And the opportunity to tell those stories, I immediately jump on [it]."

Plus, the Philly spirit seems to have inspired some new collabs outside of the show: fashion expert Tan France recently teamed up with Philly native Tina Fey for his webseries Dressing Funny to make over Saturday Night Live alum (and recent Wine Country star) Rachel Dratch. In fact, the whole Dressing Funny series should keep you occupied while you watch for more Queer Eye content; new episodes are uploaded every week.

Between Japan and Philly, it seems like just a matter of time until the Fab Five have gone all over America (and overseas) to help deserving heroes. And while yes, we have to wait until 2020 to see Season 5, the heartwarming realness of every Queer Eye season so far seems as good a promise as any that the season will be worth the wait. In the meantime, there's plenty of other ways to keep up with the Fab Five.