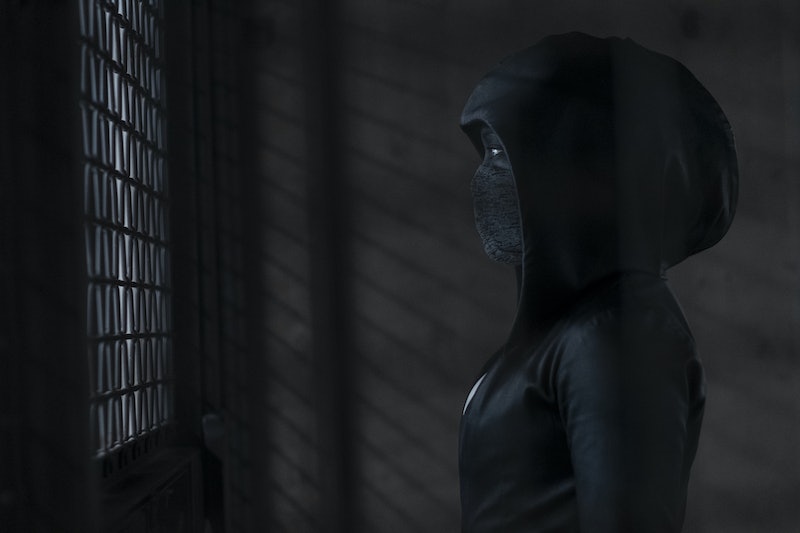 If Alan Moore and Dave Gibbons' Watchmen was an '80s thought experiment, the new series from Damon Lindelof carries that experiment right into present day. HBO's Watchmen takes place in 2019, as you probably noticed in the first episode. That said, it's pretty quickly apparent that this is not the same 2019 that we're living in, for better or for worse. Watchmen depicts an alternate American, in which certain historical events happened differently (or not at all) and caused a ripple effect.

In the 2019 of Watchmen, cops are masked to protect their identities in light of a white supremacist attack, weapons are regulated, and black citizens have been afforded reparations for past racial injustices. On paper, this seems like a more just America than the one we live in.

However, the series opened with the very real 1921 Tulsa Race Massacre and destruction of Black Wall Street, which reminds us that there are some elements of America's past that can't be escaped. Watchmen may have an alternate recent past, but the racist foundations of both societies are exactly the same. There are also, you know, the occasional squid storms. This is a comic book universe, after all.

History Split Between The Great Depression & The Vietnam War

In the Watchmen universe, the reason for the alternate timeline is simply the existence of superheroes. There's no specific date at which history as we know it ends and Watchmen history begins, but the first superhero team, called the Minutemen, was formed in 1939. (They were later disbanded in the '40s by the House Un-American Activities Committee.) On HBO's Watchmen, a Ryan Murphy-esque show called American Hero Story: Minutemen dramatizes their story.

The heroes altered minor events in World War II, but really kicked things into gear 20 years later. In the Watchmen universe, America won the Vietnam War thanks to Dr. Manhattan's superpowers, and Vietnam became the 51st state. After that, history changed more and more. For example, the Watergate scandal was never exposed, and therefore President Nixon was elected to a second, third, fourth, and fifth term,

Moore and Gibbons' graphic novel takes place primarily in an alternate 1985. The events of Watchmen in its timeline coincide with the events of the Cold War in ours.

By this point in time, the 1977 "Keene Act" proposed by Senator John David Keene has outlawed unsanctioned costumed superheroes. All "costumed adventurers" must work for the government.

If winning the Vietnam War is the first major historical event in Watchmen history class, then Ozymandias' squid attack that ended the Cold War is the second. Adrian Veidt stages an alien invasion that destroys New York City, but brings the world powers together.

At the end of the graphic novel, the right wing anti-hero Rorshach (who is killed by Dr. Manhattan) left behind a series of journals that expose the truth about Ozymandias. In 2019 on Watchmen, a white supremacist group called the 7th Kalvary has sprung up in response to Rorschach's journals. They're basically Squid Attack Truthers, except they're 100% correct (about the squid, not their politics).

How is that squid attack connected to the squid rain in Episode 1? Perhaps Veidt is doing more in his manor than simply writing a play...

Robert Redford Is President In 2019

This new piece of Watchmen historical canon is based on a joke at the end of the graphic novel, in which someone speculates that the actor is looking at a presidential run in 1988 (the year actor Ronald Reagan ran).

At the dinner table in Episode 1, two girls list the following presidents presumably in order: Harry Truman, Dwight D. Eisenhower, Lyndon B. Johnson, Richard Nixon, Gerald Ford, and Robert Redford. While the biggest deviation is Redford instead of Reagan, there are some other discrepancies. Chief among them is the absence of President John F. Kennedy, who was still the 35 president in the graphic novel and assassinated by one of the masked vigilantes — so that's something to keep an eye on. If the list is correct, Jimmy Carter also never became president in the Watchmen universe. And, since Ford was elected after all, that means Redford probably didn't win his initial '88 bid.

If you want to get really into Watchmen history, HBO has released Watchmen supplemental materials that fill in the gap between 1985 and 2019 and explains background stuff, like why nobody seems to have a cell phone and/or the internet. But for the casual viewer, more details about the Watchmen timeline will surely be revealed as the season continues.

More like this
'The Last Of Us' Has Officially Been Renewed For Season 2
By Darshita Goyal
Rupert Grint Just Shared A *Major* Update About Ron Weasley’s Future
By El Hunt
'Boiling Point's TV Sequel Is Set To Deliver A “Rollercoaster Of Emotions”
By Catharina Cheung and Sophie McEvoy
Netflix Shut Down 'Bridgerton' S3 Rumours About A “Very Dark” Storyline
By Bustle
Get Even More From Bustle — Sign Up For The Newsletter
From hair trends to relationship advice, our daily newsletter has everything you need to sound like a person who’s on TikTok, even if you aren’t.