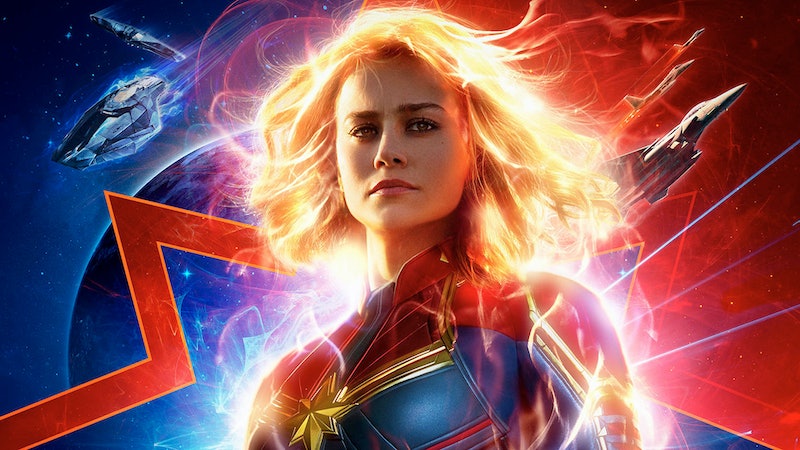 A Marvel film set in the '90s with Brie Larson portraying one of the MCU's most badass female superheroes? Um, yes please. The world — and what's left of the Avengers — have been waiting with bated breath for the arrival of Captain Marvel aka Carol Danvers to rectify the destruction Thanos brought in Infinity War, so it's no wonder the hype for Captain Marvel has been pretty damn high since it was first announced. So, when is Captain Marvel out in the UK?

You haven't got long to wait as, according to Metro, Captain Marvel will coming to UK screens on March 8, the same date as it premieres across the pond. And, as British and American fans will be able to experience Carol Danvers's introduction to the Marvel universe at the same time, hopefully that will keep spoilers to a minimum. That's if fans from other European countries, Scandinavia, the Philippines, and Australia keep quiet for two days, as it seems as though they're getting the film earlier.

I've done some digging and, while I can't figure out why the UK and the U.S. are getting the film a tiny bit later, it does fit the usual release date of a Friday. While this isn't always the case, the release of a film can depend on holidays and audience preference, as the Guardian reported in 2015.

Either way, Captain Marvel is pretty much guaranteed to be a sure-fire hit for Marvel, as there is a lot of hype around it being the first female-fronted film in the MCU... well, kinda. Netflix released a female-fronted TV series, Jessica Jones, in 2015, and then there was Evangeline Lily's shared title credit as Hope van Dyne in 2018's Ant-Man and the Wasp. I'm not trying to pit these badass women against each other, it's just that Jessica Jones and Hope van Dyne need a little credit here too, y'know? I'm totally down for these three to form like a super-team or something; I mean Danvers was originally meant to appear in Jessica Jones, after all.

While Danvers is becoming a pretty familiar face within the MCU, if you're familiar with the superhero, she's one of many incarnations of "Captain Marvel" (who was originally created in 1967 under the name Captain Mar-Vell). Danvers came into play when her DNA was accidentally fused with Mar-Vell's alien Kree DNA, which gave her superpowers, Digital Spy reports.

Danvers has an extremely complicated history (if you couldn't tell), so it's not really a surprise that some liberties have been taken when adapting her origin story into a 120-minute flick. As co-writer Nicole Perlman explained on the podcast Any Time with Vin Forte, "There's a lot of reinvention needs to happen," as Danvers is "her own person and she's a great character," and it's important to make sure "that her particular storyline is unique and fun and also fits in within this world that's going on at the same time."

Man, I am so stoked for this film. March 8 needs to roll around, like, now.