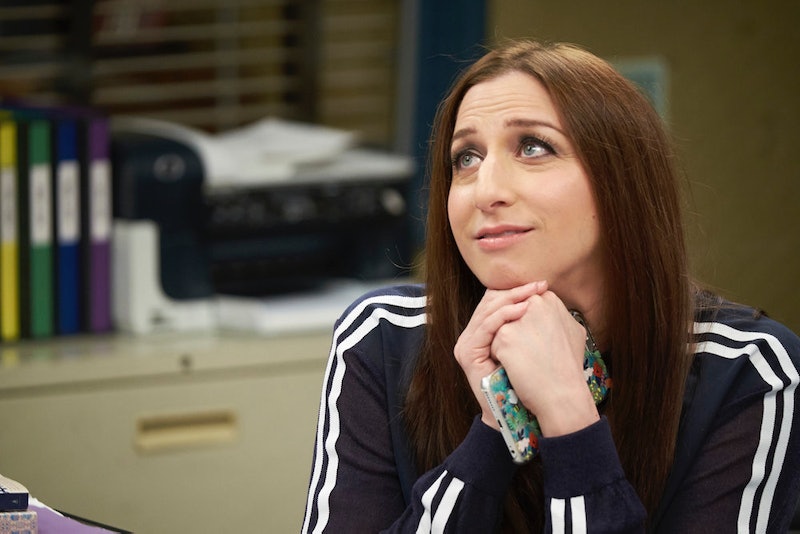 All good things must come to an end. Case in point: the incredible, hilarious, deadpan Gina Linetti is departing Brooklyn Nine-Nine. Fans have known for months that this was coming, but it won't make saying goodbye any easier. So when is Chelsea Peretti's last episode of Brooklyn Nine-Nine?

Sadly, yt looks like the upcoming Jan. 31 episode will be when Peretti takes her final bow — for now at least. Her co-star Melissa Fumero tweeted on Jan. 24 to mark the occasion. "See you next week for Gina's grand finale!" the tweet reads. "It's so good." The episode description listed on IMDB also hints at what's to come for Gina's final regular appearance: "Gina plays a high-stakes game of chess with Capt. Holt," it reads. "Rosa and Amy take Gina out for a fancy brunch. Jake and Gina must use their wits to infiltrate a posh club."

Peretti tweeted way back in October that she wouldn't be appearing for the entirety of Season 6, but she thanked fans for following what she's done with the character thus far. She also said the door would still be open for her to return at some point in the future for a guest appearance.

Showrunner Dan Goor also tweeted a statement on the heels of Peretti's announcement, and it's clear how much he'll miss both the actor and the character she brought with er. "She has brought so much to her amazing, hilarious, unique portrayal of Gina Linetti, which is not surprising since she is one of the funniest person in history," it said in part.

Peretti told Entertainment Weekly that her departure will give viewers all the feels. "It sounds cliché but I feel like you will laugh and cry, which I think is the ideal combination of an exit for Gina Linetti,” she said. “She’s very physical. There’s a lot of very silly things that she gets to do in these episodes. But then there’s also some really emotional, connecting scenes with her family and her friends.”

Fumero told TVLine that Gina's last episode is definitely something to look forward to. "It’s f*cking epic,” she said. “It’s such a great Gina episode... Her grand finale is with Amy and Rosa, as it should be. She has stuff with everybody, but they paired her with us [at the end] and we had so much fun shooting that last week. It was bittersweet and sad and we definitely cried, [but they were] happy tears.”

The promise that Peretti will return as a guest star seems very real, so it's not all bad news. Goor certainly seems eager to bring her back. “I was sad that a member of our family was leaving but excited and happy for her to think of all the Chelsea comedy that she would be doing and that I would be getting to see,” he told EW in the article linked above. “We have plans to bring her back in a future episode after she leaves — and I would imagine in as long as Brooklyn Nine-Nine continues, Gina would be popping in and out of it."

It's unclear exactly why Peretti is making the choice to peace out of the Nine-Nine, but she's been with the show for a long five seasons and has a young child at home now, so maybe it's just the next natural move for her. It's so apparent the love she shares with her co-stars and crew, so even if she's not a regular anymore, fans can rest assured that they haven't seen the last of Gina just yet.