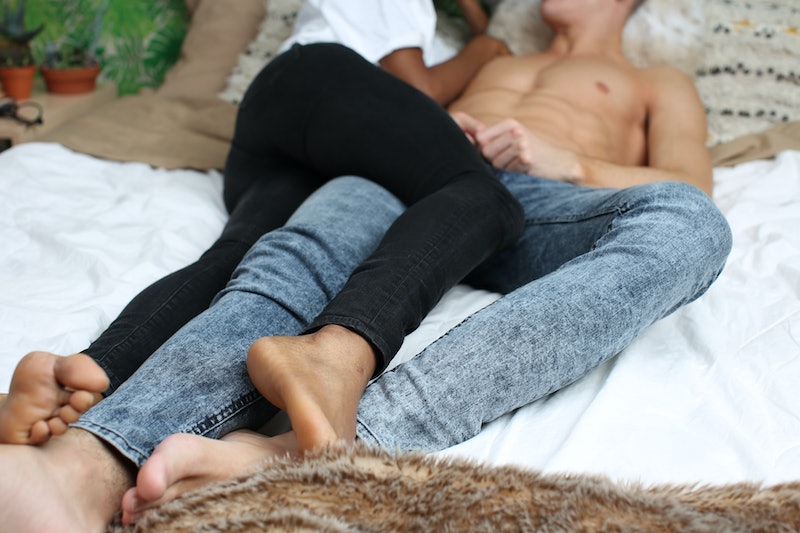 So, hey, fun fact: Jan. 2 is National Baby-Making Day — or at least, one UK-based parenting website has declared it to be so. According to a survey conducted by Channel Mum, the most common time for parents-to-be to conceive in the UK is precisely 10:36 p.m. on Jan. 2, which has led to the day being dubbed National Baby-Making Day. Although the survey is about a year old — according to Channel Mum’s Press Releases page, it was published in January of 2017 — it’s making the rounds yet again; just Googling “National Baby-Making Day” brings up a whole page of news items from the past 24 hours. I guess that means we should all get ready for an influx of pregnancy announcements in the weeks or months to come, particularly from anyone we might know who lives across the pond.

According to Channel Mum’s survey, 71 percent of the 2,139 couples polled said they would be having sex on Jan. 2. The reasoning? As Channel Mum put it, “The majority agree that Jan. 2 is the top baby-making day as ‘the drinking and partying is over’ and they want to spend time together before returning to work.” What’s more, Jan. 2 sometimes falls on a bank holiday — what we in the United States would call a federal holiday — in parts of the UK, meaning that some folks actually have the day off. In 2017, Jan. 2 was a bank holiday for England, Scotland, Wales, and Northern Ireland; meanwhile, in 2018, it’s a bank holiday only for Scotland. A day off is an excellent day to jump your partner's bones, so, uh... perhaps the popularity of early January for sexy fun times is unsurprising in that respect.

Beyond the specific information about Jan. 2, though, the Channel Mum survey also found that couples tend to have more sex over the winter holiday season than they typically do at other times of the year; indeed, 58 percent said they have “a lot” of extra sex in December and early January. Three quarters of those who said they have more sex during the holidays chalked it up to having more time together; 48 percent said they felt happier due to it being the holidays; and 28 percent said that, as a result of the influx of holiday spirit, they felt closer to their partner. 36 percent also said that the uptick in sex also may have been because they drink more during the holiday season. (Red wine, perhaps? Or maybe the hard stuff?)

Now would be the point at which I feel I should also draw attention to the fact that this survey isn’t the most, uh, official measure of when babies are conceived. Channel Mum’s press release about it doesn’t provide any information about the method they used to gather their data or how they performed their analysis of it, so it’s probably best to take the whole thing with a grain of salt; a peer-reviewed study published in a reputable scientific journal, it is not.

Interestingly, though, this particular time of year does appear to be quite popular for conception across the pond according to more legit measures: Data released by the Office of National Statistics (ONS) in 2015 revealed that the most common birthday in England and Wales is Sept. 26. What’s more, the other dates making up the top 10 are all either in late September or early October, and, well… you do the math. Literally: A pregnancy typically lasts about 40 weeks. 40 weeks after Jan. 2 is around Oct. 9 (it’s Oct. 9 on the nose in 2018). And if your birthday is somewhere between Sept. 18 and Oct. 9, that means that you were probably conceived somewhere between roughly Dec. 19 and Jan. 2.

(Worth noting: Although 38 weeks is sometimes cited as the length of a pregnancy, 40 weeks is the time at which babies are at full gestation; what’s more, according to a study from 2013, pregnancy length can vary by up to five weeks. All of which is to say that estimating birth date based on date of possible conception isn’t as simple as you might think, so everything we're talking about here isn't a sure thing anyway.)

Of course, there’s nothing that says that any sex you might be planning on having on Jan. 2 absolutely has to be for baby-making purposes; if you have no interest in having kids, that’s of course fine, and you should still go ahead and have sex tonight (or on any other day you please). Or, hey, if you don’t want to have sex tonight, then… don’t. Even if you do want kids. What I mean to say is, just because everyone else is doing it doesn’t mean you have to, whatever “it” may be in this case: Trying to get pregnant, having sex just for the fun of it, etc. You do you, as long as whoever you may or may not be doing it with is also enthusiastically consenting.

Happy Jan. 2, team. Make it a good one, whatever that means for you.