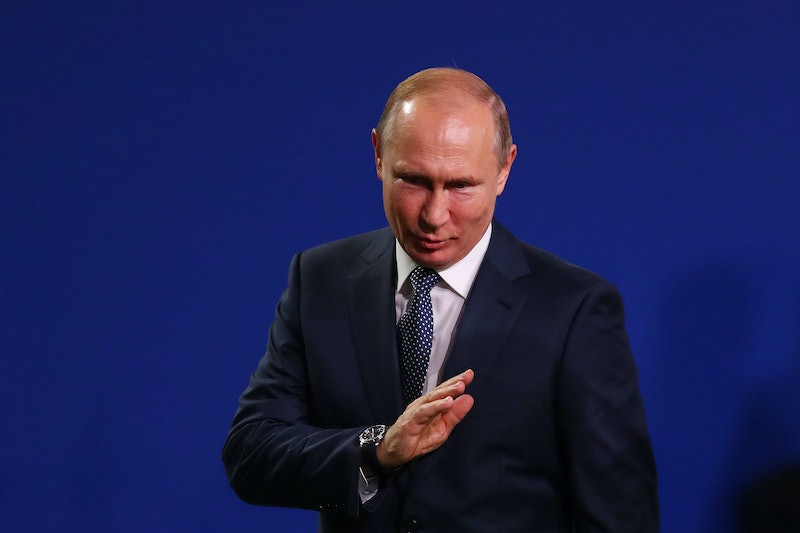 As the world gears up for the Trump-Putin summit scheduled for this Monday in Helsinki, Fox News is prepping for its own visit with the formidable Russian. Fox News Sunday anchor Chris Wallace announced Thursday that he will be sitting down for an exclusive interview with Vladimir Putin following the Russian leader's meeting with President Donald Trump. Putin's Fox News interview airs when the U.S.-Russia summit is completed on Monday, July 16.

"We're going to sit down for a half hour interview," said Wallace on America's Newsroom. "No holds barred. No subjects off-limits."

This meeting will be Putin's first interview with a Western journalist since he sat down with NBC News' Megyn Kelly at the Kremlin last March. Then, the interview covered topics including a potential arms race and the alleged meddling in the 2016 elections, which both Trump and Putin have denied, according to the New York Times.

Wallace's interview on Monday is expected to cover these topics in addition to the Kremlin's position after talks with Trump. Wallace aims to find out if the two nations could agree upon solutions for controversial issues like NATO, Syria, and Ukraine, Fox News Insider reports.

"I want to delve into Vladimir Putin and what he wants for his country," said Wallace on America's Newsroom.

Putin is no stranger to the Western media though. Before NBC's interview last March, Showtime filmed an Emmy-nominated four-part series called "The Putin Interviews." The series, which aired in June 2017, includes more than a dozen interviews filmed over two years with Oliver Stone, an Oscar-winning filmmaker.

Putin is known to be a difficult interviewee, too, able to talk around any issue the journalist probes. After Kelly's interview with the Russian leader, the Los Angeles Times called him "a proven master of deception." We'll see if Wallace is up to the challenge Monday.

Fox News has long been purported as a megaphone for the Trump administration's agenda (a relationship that poses a threat to our democracy, according to an NBC analyst). Ties between the White House and the right-wing news network have only strengthened with the recent appointment of Bill Shine, former Fox News co-president, as White House deputy chief of staff for communications. New York Magazine reported that Trump also maintains a close relationship with Fox News host Sean Hannity. Additionally, Donald Trump Jr. is dating another Fox host, Kimberly Guilfoyle.

"Is he a friend? No, I don't know him well enough, but the couple of times that I've gotten to meet him, we've gotten along very well," said Trump at a news conference Thursday, CNN reported.

"Ultimately, he's a competitor. He's representing Russia. I'm representing the United States," Trump continued. "Not a question of friend, or enemy —he's not my enemy, and hopefully someday, maybe he'll be a friend."

Meanwhile, Trump has said that he plans to ask Putin about election meddling during their summit, but did not lay down a hard tone for discussion. "All I can do is say, 'Did you?' and 'Don't do it again,'" he told reporters at a press conference Thursday.

Other topics of discussion include Russia's militarization of Crimea and what this means for Ukraine's independence, the Washington Post reports.

Some have voiced worries that Trump will concede to Putin on certain issues when they meet privately. The U.S. president has not ruled out suspending NATO military exercises in the Baltic Sea, a strategic practice that has often been a point of contention with Russia.

This summit will be the president's third meeting with Putin in the past year, but their first scheduled as a standalone one-on-one meeting. The last two were held alongside other multinational summits: the first at the G20 summit in Germany in July 2017, and the second at the Asia-Pacific Economic Cooperation (Apec) summit in Vietnam last November.