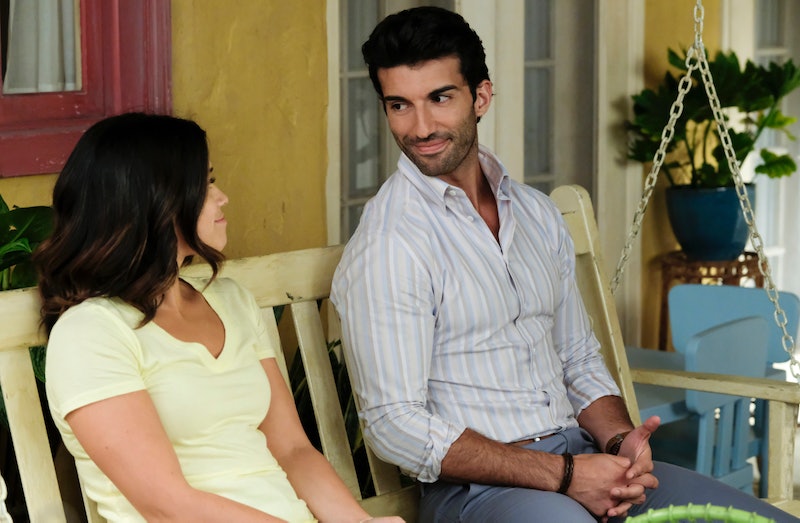 Jane was quite the renaissance woman in Season 4 of Jane The Virgin. The modern-day mama got the whole co-parenting thing down, finished her first book, and even managed to move on after Michael. Unfortunately Jane is taking a temporary break from motherhood following the midseason finale airing on Dec. 8. So, when does Jane The Virgin return for the rest of Season 4?

Luckily fans won’t have to wait too long for the hit telenovela-esque comedy to return. Jane The Virgin will return on Jan. 26. And although her love life ultimately took a lukewarm nosedive in the first half of the season when Adam unexpectedly broke up with her, things could be heating up for Jane in the romance department again when the show returns in the new year.

Jane the Virgin creator and showrunner Jennie Snyder Urman did promise Variety readers that the show was “bringing back the joy,” in Season 4. And while Jane has been thriving as a mom, with her family, and in the writing department, love has been as hard to come by for Jane as Rogelio getting a co-star he actually likes. Maybe the second half of the season will completely deliver on this happy promise for Jane and bring a new suitor into her life — or simply just revive an old flame. Stay with me here.

The series has been teasing the coupling of Jane and Rafael for the last three seasons, though their early attempts to make things work fell incredibly flat. But Season 4 brought the parents together like never before — literally, since a suddenly-homeless Rafael needed a place to stay. Unfortunately, the new roommates didn't immediately hit it off.

In the Season 4 premiere, Jane attempted to sort out her feelings for Rafael and eventually tried to make a move on him. But her feelings weren’t reciprocated, and the pair ended up having a major fight about Mateo. So what did Jane do? What any any woman does when a man brushes her off: she got a new one. Jane took this rebuffing as her sign to rekindle things with her first love Adam. And although a clearly-jealous Rafael thought Adam was incredibly childish, he gave Jane his blessing to bring Adam around Mateo.

This kumbaya moment between the three of them seemingly crushed any hope for the shipping of Jane and Rafael, but, after Adam decided to take a job on the opposite side of the country, all bets were off: Jane and Rafael could possibly be together again. And why not? Mateo loves having his parents under one roof. Alba loves Raf. Xiomara was never particularly rooting for Adam, and even Rogelio has started to warm up to his grandson's father. Additionally, every time Rafael struggles to make a decision or declines to partake in Petra’s schemes regarding the Marbella, it’s because of Jane. Over the last three and a half seasons he's shown tremendous character growth because of Jane, and the two have in turn grown incredibly close.

Even though Jane has married and dated other people, and Rafael had a few flings himself — one even resulted in him getting hit by car and subsequently being comforted by Jane — there’s no denying the serious chemistry the two of them share. Even Jane the Virgin actor Justin Baldoni agrees. "I would be lying if I said I wasn't [rooting for them]," Baldoni said in an interview with Bustle. "I think they could be a beautiful story, to show not to write anybody off. Anybody has the chance to grow and become the man someone like a Jane deserves. Or become a man who deserves someone like a Jane."

When it comes to Jane The Virgin, things never go 100 percent according to plan. But with Baldoni on board with the relationship, and seeing the direction in which things have been heading regarding Jane and Rafael this season, it's not a stretch to hope that #Jafeal might officially be an item come 2018.